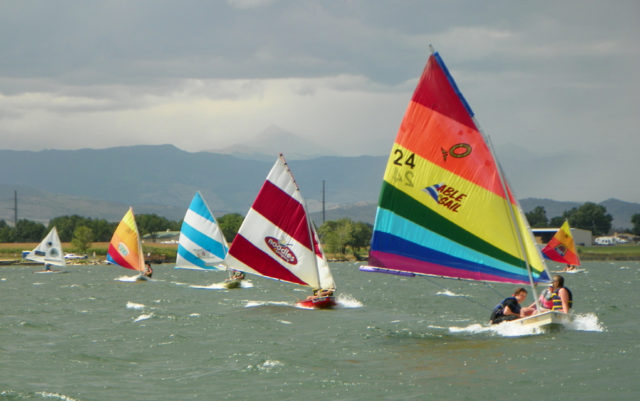 Summer camps are all about fun and enjoyment — a much-needed break when school is out. But for some kids, camps have the potential to bring about positive mental and behavioral changes. ABLE to Sail is a next-door option that combines fun and skill-building through sailing to master the negative mental chatter of low self-esteem while creating a sense of belonging.

ABLE to Sail is a day camp for 11- to 18-year-olds, held for four days at Union Reservoir in Longmont. Campers learn the basics of sailing from a U.S. Sailing certified instructor who also inspires and empowers at-risk kids. In January, the camp was recognized with the Outstanding Creative Innovations in Programming Award by the U.S. Sailing Association in Florida.

Diane McKinney founded ABLE to Sail in the summer of 2013 because, “Every kid is at-risk, no matter which part of town they come from.” McKinney was raised in a successful family, with good education and high expectations for her future. She had a life that “looked good on paper,” yet she ended up becoming a drug addict, who often felt that nothing she did was ever good enough.

Once she found a way out of addiction, she moved to a stereotypical “not nice side of town” in Longmont, where she became sort of a “cool” neighbor. And her house became an oasis for kids to hang out — until some of the kids told her they got stoned.

“It occurred to me, Oh my God, what if they fall down the road of addiction?” McKinney says. “Because when I wanted to get clean, I made a list: I want to climb mountains again. I want to ride horses again. I want to sail again. I’m going to play my guitar again and to try and motivate myself. And it occurred to me that the kids on this side of town couldn’t make a list. They’d never done any of those things.”

In response, she decided to expend all of her life savings and inheritance and start ABLE to Sail, remembering the feeling of empowerment she learned from sailing herself.

The ABLE to Sail curriculum is aimed at changing negative, self-defeating thought patterns and beliefs. It seeks to inspire and empower youth to realize the infinite possibilities that lie within each of them. Every lesson in sailing is a chance to change perspectives and address depression and anxiety, and to limit screen-time and the effects of social media, which plays a part in the negative self-image children may develop and which can lead them to participate in high-risk behaviors like drugs, alcohol, self-harm, isolating and suicidal ideations.

For Izaiah Reed, 21, sailing a boat by himself gave him the confidence he needed to understand that it was OK to be on his own. Both his parents were drug addicts; by the time he was a teenager he was an addict, too. His adopted mother didn’t know how to help him break the addiction cycle and sent him to ABLE to Sail, hoping McKinney could help.

It was not a magical solution. The first summer he went, nothing really changed, and he stayed on the path of addiction. But during his second summer, his perspective changed when he realized that McKinney cared. He felt she truly believed he could do better. And so he did.

“She taught me how to sail alone, how to control the boat,” Reed says. “To feel the wind, concentrate and to do something on my own. I was hanging out with the wrong crowd because I did not want to be alone.”

Nowadays, Reed is in college and he occasionally goes to work as a counselor at ABLE to Sail. He credits his positive outcome — against all odds — to the influence of McKinney and sailing because it taught him how to be OK and feel powerful on his own.

For the second year, ABLE to Sail will have a special LGBTQ+ week in 2019, following the same four-day adventure therapy of empowering youth and raising self-esteem through sailing. For McKinney, this week is especially meaningful since she has also struggled with the challenges, both internally and socially, as a lesbian.

In addition to sailing, ABLE to Sail provides daily motivational discussions to apply the lessons kids are learning out on the water to real-life experiences and struggles. Throughout the years, McKinney has helped more than 1,000 children and teenagers to navigate through the inevitable storms of youth in a positive empowering way.

As she says, “You can’t run from the wind, but you can adjust your sails.”