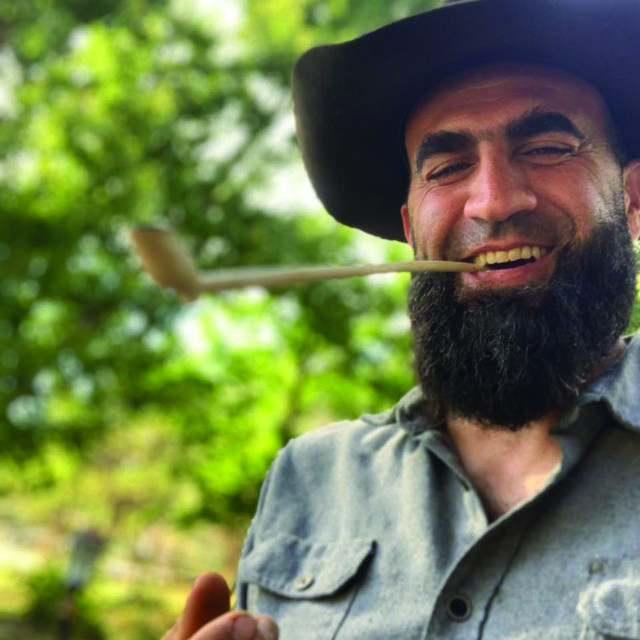 From where he stood in the Boulder neighborhood near Indian Hills, André Houssney could see houses burning in every direction—in the foreground, the mid-ground and the background of his view, and well into the distance. The destruction was on a scale he’d never seen or imagined in Boulder, and it was like a vision into the future of climate change.

One of his hay fields burned, he says, but it was a negligible loss compared to the tragedy so many others endured that day.

“I was going around and helping pull out horses,” Houssney says. “There were a couple of horses that were wild. I mean, they could smell the smoke and see the flames and so we just broke the fences down, turned them out in the fields and hoped for the best.”

He shakes his head at the memory. “That was intense.”

Two weeks later, Houssney, a beyond-organic (superseding organic standards) farmer and owner of Boulder’s Jacob Springs Farm, would be speaking at the state Capitol, addressing his fellow Coloradans about climate change. He described the dangers he’d just witnessed first-hand and the threats they pose to farmers like him.

“We’re skating by right now,” Houssney said from the podium at the Capitol. “But these kinds of things are inevitable and they’re going to happen more frequently. What is it going to take? Ten-thousand burned homes instead of 950 before we start listening?”

Houssney’s family immigrated to Boulder when he was in elementary school, having fled a civil war-torn Lebanon. He says as a child refugee it was hard for him to fit in with other kids and he spent a lot of time alone.

Until the fateful day when he was walking past Jay Nieber’s farm.

“I was walking their fence, probably throwing rocks at their animals or something, and they saw this pesky kid out there,” Houssney recalls. “And they put me to work.”

That was the beginning of Houssney’s life-long journey as a farmer. Nieber showed him how to irrigate fields, taught him how to use farm machinery and how to train horses. He explained to Houssney how renting farmland was an achievable, realistic way to get his own operation started. Nieber showed him the ropes and taught him the way. And Houssney had never felt more satisfied.

“Growing up in a war was different. Hunger does things to your brain,” Houssney says. “My mom was really traumatized by food shortages, so being able to grow vegetables, grow food, and bring it home was really satisfying.”

He decided when he was just 10 years old that he was going to farm for the rest of his life—though at the time, neither he nor Jay Nieber could have foreseen the challenges that climate change would present them.

Today, Houssney owns and operates Jacob Springs Farm on the corner of 75th and Arapahoe. Founded in 2010, it’s a diversified beyond-organic farm that specializes in grass-fed proteins. They raise their own cows, pigs, lambs, turkeys, chickens and salad greens; they grow their own wheat, which they sell to Moxie bakery and Pastaficio Boulder; they grow their own barley, which they sell to local breweries to make beer—and this spring they’re launching a year-round farmstand where customers who want to shop wholly organic, and support a local farm, can come pick up everything they need.

“Our local food system right now is basically just providing the garnish. What we want to do is provide the bulk of calories—and not just bulk, but quality,” he says. “So, in the farm stand we’re carrying raw milk, butter, cheese, yogurt, eggs, beef, pork, lamb, sometimes turkey and chicken, pasta, pasta sauce, salad, salad dressing, vinegar, mushrooms, all the time, all year-round.”

Basically, he says, he’s trying to create a mini-mart for organic, locally grown and raised foods from Jacob Springs. And, he adds, they’ve currently got milk and meat shares available.

“It’s restoring a sense of terroir—of place,” Houssney says. “This is the cuisine of this place, because this is what we produce here [in Boulder, Colorado].”

However, Houssney fears that under the looming cloud of climate change, he might not be able to produce all of that food, all of the time. Things are changing fast for farmers like him and he’s already scrambling to find ways to adapt to it. He says this year he didn’t plant winter wheat, as it hadn’t rained since June and there wasn’t any snow on the ground until the very last day of the year—the day after the Marshall Fire.

“Winter is coming later and later,” he says. “If you go 10 years down the line of this, it may be difficult for us to grow anything. I don’t want to be Chicken Little, but we can’t farm without water.”

That was the fear that brought Houssney to the steps of the Capitol earlier in January. He wanted to express that this was a sign of what’s to come—a shot across the bow—and not some bizarre aberration.

“[The Marshall Fire] is exactly the type of scenario that we can expect from climate change, and it seems like everybody’s just kind of going about their day, as if it’s some kind of an anomaly,” Houssney says. “We just have to connect the dots for people and help them see that this is all the same thing.”

Despite his experience with the fire, and despite his trepidations about farming in the future, Houssney remains optimistic. He’s spent over a decade building and growing his farm, cultivating and refining his processes, learning how to produce food in the most sustainable, regenerative way possible. And his farm stand, which he hopes to launch in spring 2022, is the culmination of all that hard work, and his lifelong career as a food producer—a provider—a local farmer.