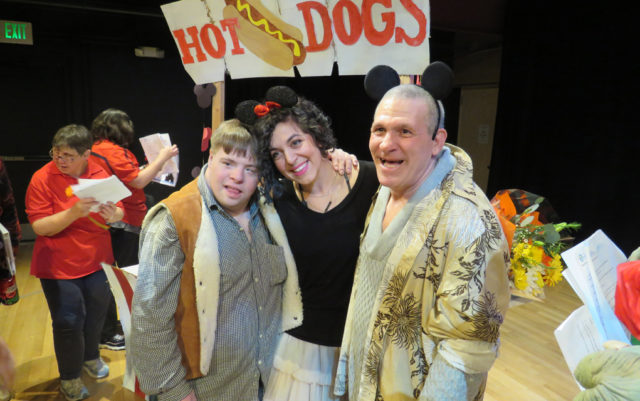 North Pole. Aliens kidnap Santa and take him to outer space. They’ll use him to destroy the universe. That is, unless Mrs. Claus and a group of astronauts can save him. They hop aboard the nearest reindeer-drawn sleigh, but alas, they crash into a distant planet. But Mrs. Claus and the astronauts become fast friends with the space warriors that inhabit this alien world, and with a little luck, they might be able to band together, find Santa and save the universe.

See the saga unfold on stage at the Dairy Arts Center on Feb. 28. The show was conceived, written, designed, blocked and (will ultimately be) staged in just 10 weeks by members of the Centre Stage program at the Lafayette nonprofit, Imagine!, which serves and supports people with mental and physical disabilities in Boulder and Broomfield counties.

Kristel Jelinek Brown has been running the Centre Stage program with Imagine! for the last five years. Every winter, she helps participants, of varying age ranges and abilities, put on a free show created solely from their collective imaginations.

“It’s so important to me that a lot of what’s generated comes directly from them as opposed to me putting my ideas on it,” Brown says.

At the beginning of the program each year, Brown welcomes people who have been receiving services through Imagine! and have either participated in previous productions or heard about the experience from others and want to join in. About five to 10 new people join every year — the cast this year totals around 40 people. Often, Brown says, past participants have been stewing on ideas for setting (previous settings have included Las Vegas, a cruise ship and Disneyland) or elements like songs, lines of dialogue or dance numbers they want to include in the upcoming production. Through a process of game-playing, improvisation and, ultimately, voting, a setting is whittled down, dialogue is written and a narrative is formed.

It is imperative to Brown that the participants create as much of the production — that they reap as many benefits from the creative process — as possible.

“Your ability to engage with the arts is completely and totally about access. So if you don’t have a lot of access, then the pattern tends to be that you’re presented with an expert who knows a lot and you’re this empty vessel, so they’re going to pour their knowledge into you, which I think is a really gross, sort of imperialistic, patriarchal way of doing it,” Brown says. “Imagine! has always given me so much freedom to structure it in a way that serves the group first and foremost. I don’t even like them to sit at tables. I like us to be in a circle. I don’t want to stand up in front of the group as this expert. I don’t see myself as their director so much, but as their co-creator, a sort of guide along the process.”

It’s an experience that many of the participants would not be able to have otherwise. Brown notes that if an Imagine! member has been in a production in a traditional school or theater company, they’re likely to have been hidden in the background — “sort of stuck to the side with a buddy and that’s it.”

Though that sort of participation is beneficial, Brown says, it doesn’t provide folks with mental and physical disabilities the spotlight Centre Stage does. And it impacts their senses of self-worth.

“They may have experienced theater or gone to see a play, but are often very quick to say, ‘Well, I couldn’t do that,’ or, ‘The opportunity to do that doesn’t exist for me.’ Or sometimes it’s as extreme as, ‘My voice isn’t important enough to be in the mix,’” Brown says. “But they’re so excited about this project. And I care so much about it, and their investment is so unwavering. So it challenges me to show up all the time with that much investment and that much care and that much attention to detail, because it matters so much to this group of people.”

“Donors, board people, faculty members, consultants that I have worked with will come to see it and they’ll just be blown away because I think they’re expecting it to sort of be this parade of, like, pity or something. That’s a really crass way of saying it. But it’s not that. It’s such an empowered, joyful, self-centered — I mean that in the most positive way — experience that I think people don’t even know how to talk about it afterwards.”

Brown relishes that the audience becomes part of the production. If a cast member, for instance, stumbles over a line or freezes, audience members will burst into applause whenever the line or dance or song does come out.

There are techniques Brown has developed to support the actors on stage. She’ll put people in groups with an Imagine! staff member nearby who has a clipboard with the script in case lines are forgotten. She limits entrances and exits to simplify the stage direction.

And in the story generation process, Brown offers support by filming everything and writing down every idea so that if, say, the groups needs a plot point or a line of dialogue, Brown can cull through the work that has already been done to see if there’s a solution.

Everything outside the production, too, is designed to support the Centre Stage participants. One of the biggest obstacles for those with mental and physical disabilities is transportation and parking — something as seemingly minor as blocking off parking spots and providing transportation for the actors on show night means one less thing they and their families have to worry about.

The goal, Brown says, of minding all these details is to provide a sense of normalcy for the participants. It’s a key reason why Centre Stage productions tell the colorful, imaginative stories they do instead of, say, forcing participants to speak directly and formulaically about their lives as people with disabilities, Brown says.

“There is something different [about Imagine! members], but it doesn’t need to be a thing that we make a huge deal over,” she says. “It’s just people who want to get up and have fun and tell stories and create theater and be silly and dress up and be proud of themselves in front of their friends. That is just as valid and just as important as making it something that would be about their experience as a person living with a disability. They live with that every single day. They’re dealing with that every single day. They’re acutely aware of the ways in which our society does not normalize, make things easier, all of that.

And the payoff to that commitment is huge. Because when the theater fills, the lights come on, and the curtains draw, magic happens.

“It’ll be dress rehearsal, an hour before the show, and the participants are still not knowing their lines and still a little timid,” Brown says. “And then that time in between, when they go in the green room and get ready and the house starts to fill up and they peak out and they see the audience, it’s just there is something magical. They all of a sudden know their lines, they’re full of this energy. And so for them to have that experience and to perform for somebody… to be on the other side of that is really cool.”

Brown, who has theater degrees from CU Boulder and City University of New York, and who worked for almost a decade in productions in New York, on regional tours and on a cruise ship, says she’ll often leave Centre Stage performances saying, “This was still the most important piece of theater that I saw or participated in this year.”

And being able to give the gift of empowerment and community to Imagine! members is well worth the work it takes to get the shows to stage.

“You hear these funny jokes about theater kids, and it’s always like these nerdy kids who bond together very deeply over this thing that they’re doing. But that stereotype exists for a reason, because it is this intensive, emotional, creative experience that you’re sharing,” Brown says. “You’re sharing the experience of being human with other humans in this very intense atmosphere. I’m so happy that they get to have a little bit of that festive, thespian, communal experience. I think the confidence to even just stand in front of a group and say something and let their voice be heard is super empowering.”