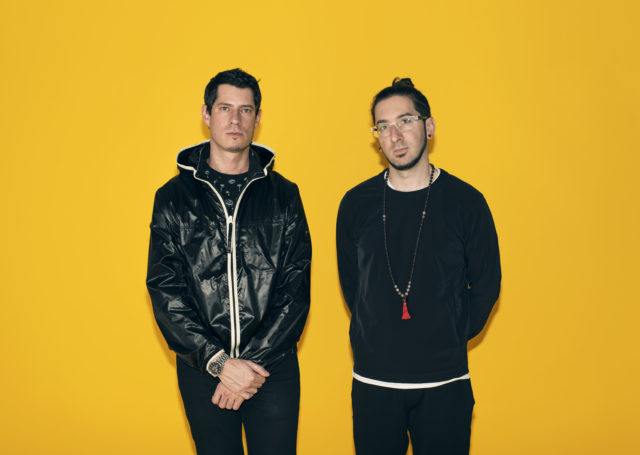 When Dominic Lalli and Jeremy Salken started their Boulder-based EDM project, Big Gigantic, the two musicians never could’ve expected the whirlwind that was about to propel them into electronic stardom.

Lalli, a trained jazz musician from the Manhattan School of Music, was playing saxophone with The Motet, the beloved Denver-based afrobeat funk band, when he met Salken, who, at the time, was working as a drum tech for The Motet and dabbling in graphic design. The two started jamming together just as Lalli was starting to produce electronic music, honing his skills as a DJ and experimenting with ways to weave his love for jazz into the pulsing digital dance music he produced.

In 2008, the two officially teamed up as Big Gigantic.

What happened next, happened quickly. In 2009 they produced their first two EPs, Fire it Up and Wide Awake — their provocative, bass heavy, saxophone-driven dance music quickly distinguishing them from other EDM artists through a combination of classic instruments riding atop hyped-up electronic beats. That, in concert with the vivid spectacle of lights and lasers, makes their live shows a multi-sensory spectacle.

For the next few years, their songs were shared relentlessly across the web, via sites like thissongissick.com, and their fan base expanded beyond Colorado, across the nation and outside of the U.S. The Big Gigantic wave was swelling, and fast.

Still, their sound was so foreign to most major entertainment agencies that for the first two years, Big Gigantic couldn’t get any major talent agency to back them. Their sound didn’t fit the mold of EDM’s DJ-centric template, which meant that not only did their manager have to double as their booking agent, but they also often had to agree to door deals in order to get gigs, where they assumed all financial risk for the event.

That was a chance they were willing to take, though. So confident were they, in their unique sound and their insanely loyal fan base, they dove headlong into live shows, regardless of the financial uncertainties. And it paid off. Their shows were successful and grew steadily — from local gigs and one-off performances, to opening for bands like Sound Tribe Sector 9, to festivals like Mountain Jam, Bonnaroo and Coachella, touring the world with their hybrid music. Eventually, in 2012, they headlined their own festival at Red Rocks: Rowdy Town.

In just four years they had risen from musical obscurity to commanding the stage of Red Rocks.

“It’s basically the bucket-list, coolest thing ever,” Lalli says, of playing the Rowdy Town show at Red Rocks. “And the fact that we get to keep on doing it every year is pretty special.”

“It’s one of the greatest venues that we’ve ever been to,” agrees Salken. “It’s such a special vibe there… It never gets old, that’s for damn sure.”

2018 is Rowdy Town’s seventh year, and as such, Big Gigantic decided to step outside of the box and add another dimension to their live show. “We try to break new ground every year,” Lalli says, “And that’s why this year we decided to do the show in 3-D.” He explains that the crowd will receive a pair of 3-D glasses when they walk into the amphitheater, and a large portion of the visual experience both nights will play out in the third dimension. “It’s a whole two-night story,” he says. “We’re crafting a journey.”

It’s a journey both Lalli and Salken hope will transcend the traditional concert experience, and one on where they plan to debut some new tracks — which, the musicians say, they have a lot of.

“We’re hoping to be releasing music for the next year about every couple of months,” Lalli says.

Big Gigantic’s last album, Brighter Future, featured collaborations with Waka Flocka Flame, Cherub, Naaz, Jennifer Hartswick and a variety of other artists from a diverse array of genres and backgrounds. Collaboration is something Big Gigantic seems to thrive on, and many of their live performances are meshed, mixed and melded with other artists like Big GRiZmatic (Big Gigantic, GRiZ and Gramatic) and the jam band/electronica “supergroup” Gigantic Underground Conspiracy (Big Gigantic, the Disco Biscuits and Underground Orchestra).

It only goes to show how far they’ve come. Only nine years ago Big Gigantic was playing after parties and doing intimate small-time shows along the Front Range. Today, they are not only collaborating with and playing alongside some of the biggest names in EDM, but they have become one themselves.

“Boulder is a great place to come up [as a musician],” Lalli says. “It just takes a lot of hard work — a lot of persistence. You just have to stick with it.”

Big Gigantic will play their 3-D two-night Red Rocks festival Sept. 28-29, 2018, and continue along their euphonic electronic way, touring the country through mid-November, and releasing new music well into 2019.

But what then? What do these two local EDM stars do when they aren’t on stage, touring or in the studio?

Well, the same kind of things any other Boulderites do, naturally, even though their free time is scarce.

“I do a bunch of hiking around here,” Salken says. “And I go to the Fox a lot and the Boulder Theater to see music there.”

“Some hiking in Chautauqua,” says Lalli, who loves having the mountains so close. “Or there’s a lot of great restaurants.”

“We’re still keeping it real in Boulder, still holding it down,” Salken says.

That free time may still be a long way off, though. And until then, they both know they’re going to be deep in their craft — up to their ears in jazz, beats, builds, drops and visions of Red Rocks. And they wouldn’t have it any other way.

Winter, A to Z, Colorado style

No pass, no problem