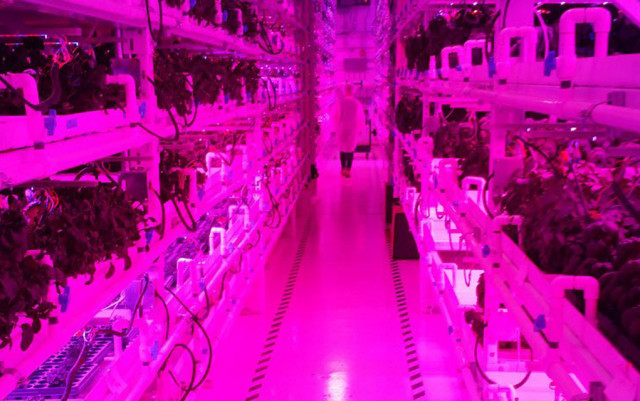 With a global population expected to reach 9 billion people by mid-century, a bioastronautics specialist in Lakewood has developed an out-of-this-world system that could revolutionize the future of farming.

Tommy Romano, CEO and founder of Infinite Harvest, Inc. is using space station technology to grow crops in a way that reduces the amount of space and water necessary for traditional farming. He and his team of business and engineering specialists at Infinite Harvest have also eliminated the use of pesticides, chemical runoff and even sunlight in their growing practice.

“We mimic Mother Nature’s environment for the plants the way that the plants want to grow, instead of trying to modify the plants and combat Mother Nature outside, such as no GMOs are needed for [our method],” Romano says. “So we don’t have to worry about those types of crops anymore for us, which is a big part of our branding: no pesticides, no herbicides, no GMO.”

Romano began developing this technology while in graduate school at the University of Colorado Boulder, working on a project about sustaining human life on Mars. The crops at Infinite Harvest, such as arugula, kale and basil, are grown with an advanced hydroponic system that involves stacking crops vertically, which increases the crop yield and decreases the amount of space necessary.

“The biggest aspect is things taste differently in the nutrient content that’s in the soil or the environment that they’re grown in,” Romano says, adding that weather is another factor that affects taste. “Since we can control the environment, we can control the nutrients within the water that the plants are seeing at different stages of their growth cycle. We can make an arugula a bit more spicy, a little bit more peppery, a little bit more woody, depending on the sequence, or the recipe, of the growth period that we have for those plants.”

Another benefit of this growing technology is the shortened amount of time needed to produce crops that are ready to eat. Since Infinite Harvest mainly sells its produce to restaurants, delivering high-quality food in a timely way is imperative. Luckily Infinite Harvest manages to grow its crops in a much shorter time period than is required by traditional farming methods.

“The grow operation from seed to table literally is measured in hours, no longer days or weeks,” Romano says. “We’ll harvest in the morning and have the product at our client’s restaurants or stores within a matter of hours before lunch time, and their clients are eating that same produce for lunch. So the freshness aspect is un-compared to any other.”

Romano plans to grow his business by offering more types of produce. He has been testing out cost efficient ways to grow lettuces and other crops. He also plans to upscale by getting a larger facility to accommodate the increasing demand for his product.

“Our next facility, we’re looking at getting into different strains of tomatoes as well as very untraditional hydroponic crops,” Romano says. “Just to give you an example, we did a test, and we actually grew sweet corn within our system very successfully. Now cost-wise that doesn’t make sense for the business model, but that kind of gives you an idea of how far we could take this. Take a very commoditized crop and grow it without the need of the GMO corn and stuff like that.”

Romano has balanced his scientific knowledge with his role as a businessman. He continues to make plans for the future of Infinite Harvest.

“As we build a larger facility, our cost of goods and operation expenditures will scale down, making our product available for the price point at grocery stores and then eventually onto a place like public school systems,” Romano says. “As a starting business, you have to start with a certain market segment. You tackle that and you drive your operating cost down, which allows you to get into more and more markets and that is our plan.”

“Even if you’re organic, you still use organic pesticides. In high concentrations, those same organic pesticides are still toxic,” Romano says. “So there’s not a huge benefit for us for that extra cost [to obtain organic certification]. It’s not needed. Our business model is that we grow local and we sell local. We won’t deliver anything over a 50-mile radius from our facility.”

There are a handful of other facilities in the U.S. currently practicing similar types of farming. Romano says this new system of growing crops could, in the future, absolutely replace other more traditional forms of farming that are more detrimental to the environment.

“This will be a major part of future agriculture for sure,” Romano says. “As much as the technology, biotechnology, GMOs have been going on in the standard, traditional way of farming … the increase in population, the changing environment and just the social reception of GMOs and pesticides is going to force the industry to have to start looking at even more, higher technology ways of growing foods in a better manner without those negatives. And vertical farming is that way.”