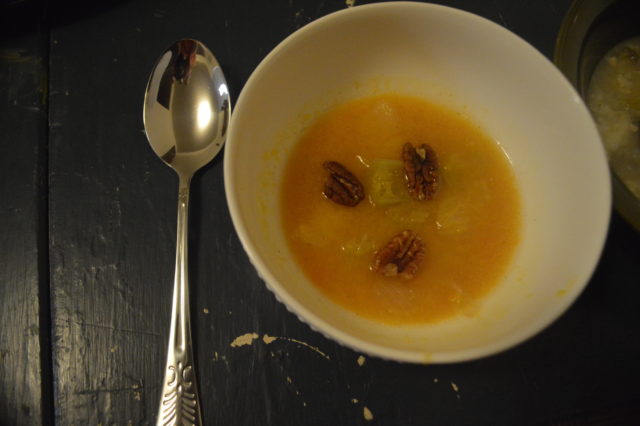 Three drinks are in front of me. One is a glass of water, refilled multiple times. One is an amber pilsner in a cozy stein. One is a cup of bone broth.

I meditate for a long time on which to finish first. Should I down the beer now, followed by the water and broth, so that I am less tipsy by the time my interview with the chefs begins? Or is it more prudent to spread the beer out between sips of the other beverages in the hopes that I am only “slightly” buzzed should the interview begin earlier than expected?

I’ll let you guess which path I chose. The only hint I’ll supply: My body temperature was higher than usual by the time I spoke with the Blissful Sisters.

If this sounds like a parable, you’re right on. I’m here to recommend to you several winter soup recipes, couched inside a real-life cautionary tale about a bisque, a blender and several glasses of wine.

But first a chat with the Emich sisters.

The Blissful Sisters — Jessica, Jen, and Jill Emich — run Shine Restaurant and Gathering Place in Downtown Boulder. Shine is a largely “paleo” restaurant. The sisters recently released a book of their recipes, which include several cold-weather soups, and with the fall coming on fast, I hastened in for a discussion on produce, soups and the merits of clean cooking.

Cooking is about “being open to being creative,” Jen says. “For me, I like this flavor and this flavor, and how can I turn it into a recipe?”

“It definitely takes making recipes a lot of times and finding something I love, and being able to duplicate it again,” Jessica says. “From there, I will use my running note pad in the kitchen and keep doing it until it’s where I want it.”

The sisters have been cooking since they were children, when their parents taught them. Their cooking inspiration comes from experience and seasonal knowledge.

“If I know butternut squash is good at this time, I’m gonna make a recipe for this. That’s what jazzes me and gets me excited,” Jen says.

For Jessica, the focus of cooking is nature.

“When I’m out on different farms, seeing what’s blossoming and blooming at different times of year, and I’m like, God, it’s gorgeous, I want to make something spectacular with that,” she says. “And that’s why a lot of our recipes are simple, because you’re honoring the ingredients when it’s simple and you can see what you’re eating and taste each ingredient.”

Favorite produce among the sisters includes cauliflower and beets.

“We have a really good local source [for beets]: Dark Farms. [It’s] a little farm, and we’ve been working with [Dark Farms] for 15 years,” Jen says.

Jill explains that beets are cleansing to the liver, which she says is “where we store a lot of our emotions.”

Cauliflower has also played a large role in the Emich sisters’ cooking, though Jill says some people may think its traditional color indicates a lack of pizzazz.

“So they don’t think it’s fun, but we showcase it in what you made, the Wild Mushroom Bisque; it’s a soup thickener.”

Which brings us to our cautionary parable.

To add a bit of spice to this article, I asked the trio to provide some “difficult” recipes for me to try out at home, prior to our interview, in the hopes that something hilarious (and perhaps embarrassing) would occur.

They introduced me to their book, Eat Drink Shine, and two cold-weather soup recipes involving pounds upon pounds of crisp vegetables. Surely I’d be up to the task?

*Disclaimer: These recipes are not truly difficult. They involve some prep time and ingredients you may be unfamiliar with, but the main inspiration for the recipe comes from experimentation with love in the kitchen. I’m more of a “throw it in a pot and boil it” cook, so feel free to ignore my story and imagine or embark on one of your own.

To start my cooking extravaganza, I prepared the immense number of vegetables that end up in the stock. Sans the recommended seaweed, I prepared seven different produce items. I also cheated a bit by adding bay leaves instead of fresh parsley, which may have been nothing more than rookie luck but ended up knocking the stock’s flavor out of the park.

While the broth stewed, I proceeded to prep/bake/sauté/boil the vegetables included in both the “Squash and Pear Soup with Spiced Coconut Milk” and the “Vegan Wild Mushroom Bisque.”

That “Bisque” title in the cookbook should have been a gigantic red for me.

I realized late in the game — post-purchasing, post-prep — that I had not purchased the “assortment of mushrooms” that the bisque recipe calls for. I had instead purchased baby bella mushrooms, which I had hoped to use in both the vegetable stock and the bisque.

I also had no blender.

2. Toss the cauliflower with 3 tablespoons of olive oil and salt in a mixing bowl. Move to a baking sheet and roast in the preheated oven until tender and lightly browned, approximately 20 minutes.

3. Rinse cashews with water and place in a small pot and add enough water to cover. Bring the cashews to a boil and then lower to simmer for 30 minutes.

5. Heat a large pot and add 2 tablespoons of olive oil. Add the chopped apple and mushrooms and a dash of salt and sauté until soft and caramelized.

6. Add the minced shallot and sauté for another 5 minutes. Add white wine to the pot and reduce the liquid by two thirds.

7. Stir in the roasted cauliflower, thyme and sage. Add the vegetable stock and bring to a boil. Simmer for 30 minutes.

8. Drain and rinse the cooked cashews. Put the cashews in a high-powered blender and fill with just enough water to cover the cashews.  Blend on high until the cashew mixture is silky smooth and creamy. Pulse in the nutmeg.

9. Puree the soup with the cashew cream in a blender (in batches) or by using a hand (immersion) blender. Blend until smooth. Return mixture back to the pot. Simmer for 10 minutes to develop the flavors.

I was reminded in that moment of a line I’d read:

“I made a soup with burned spices.

I would not give up hope for good news.”

I proceeded to make the “wild” mushroom bisque with no blender but a modicum of hope that I might be able to mash it into submission. I am not the masher I thought I was (or once was?). The mushrooms and cauliflower refused to yield to my desperate pleas.

The butternut squash/pear soup turned out much better than my mushroom stew. The pear flavors open up the squash’s unmistakably autumnal texture and juices, creating a belly-warming and filling experience. The pecan topping is much more than a garnish; it brings fall into the dining room, and I highly recommend including it.

2. Cut squash in half and scoop out seeds.

3. Brush the flesh side of the squash with coconut oil and place flesh down on a baking sheet.

5. Meanwhile, in a soup pot, heat coconut oil and saute onion, celery and pear with a bit of salt until softened and lightly caramelized.

7. Scoop out squash  and add to stock.

10. Serve in bowls garnished with pecans.

As for the mushroom bisque, it languishes in my refrigerator waiting for the additional appliance.

If you’re interested in eating clean and feeling the fun and “empowerment” of cooking, here are a few tips from the Blissful Sisters:

1. “Seconds”: At some restaurants and the farmers’ market, you can get lower quality produce for much cheaper, and sometimes, that’s perfect for your dish. It’s a good way to introduce your family to new vegetables and get comfortable in the kitchen playing with those less popular vegetables. (Jessica)

2. Farmshares: Many local farms will sell you boxes of produce on a regular basis, making those exciting new vegetables a frequent (and cheaper) part of your kitchen. (Jessica)

3. Grow your own: I started with cucumbers and basil, and thought, ‘Wow, I can do this!’ And as you get more versatile you can plant more things. (Jill)

4. Fermenting: This adds flavor and digestive qualities to any dish. And it’s not hard. A bit of salt in the produce brine and let it sit, and you have delicious ingredients. (Jen)

5. Whole animals: Buy a whole chicken, and use all of the parts. It’s good for the environment and good for you. Plus, chicken feet make a great addition to stock/broth. (Jessica)