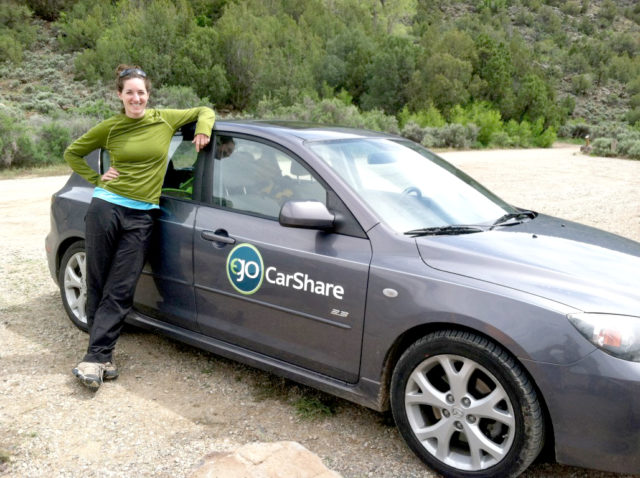 If there was something you could do to reduce carbon emissions and
traffic, create more parking and help provide affordable transportation in low-income neighborhoods, would you do it? For eGo CarShare users the answer is a resounding yes. eGo is Colorado’s only nonprofit carshare, serving Boulder, Denver and Longmont. The company’s mission is “to provide and promote alternatives to individual car ownership, thereby reducing the environmental and social impacts associated with motor vehicle use.”

“eGo was started by Boulder locals, for locals and the broader community, so it is implicitly unique in that regard,” says Peter Krahenbuhl, eGo’s CEO. Established in Boulder in 1997, it was originally dubbed “The Little Red Car Co-op.” eGo is still known for its red cars, however, the fleet has grown to include all kinds of vehicles, including the aqua blue Prius I spied on Baseline the other night. Members say having access to a variety of vehicles is a huge plus. Jacob Kostecki is an eGo member who, with his wife Martyna, has four kids and one car. He appreciates the option to use a pick-up truck for six dollars an hour instead of renting a U-Haul when he has to haul the occasional heavy load.

Joining is simple: complete the online application form and pay a $25 fee. My husband says the process took him all of 30 minutes. Approval generally happens within one business day after which a key fob arrives by mail within 72 hours and membership is for life.

Members have a choice between two rate plans, depending on their needs. Both include gas and insurance. To reserve a car, users log into the online reservation system to choose a car (options include sedans, SUVs, all-wheel-drive vehicles, pick-up trucks and more), and the pick-up and drop-off location and times. eGo vehicles are parked strategically in lots located adjacent to B-Cycle stations, bike paths and public transit.

While members may choose the car location based on proximity to home or work, for some it just depends where a favorite car is parked. Karamjeet Khalsa is an eGo member who always picks up his car at Boulder Junction; the 30-year-old software developer says there’s a 2015 Toyota Camry parked there that he particularly enjoys driving.

Not only has eGo grown to serve Denver and Longmont, the company recently announced it will be the country’s first nonprofit electric vehicle (EV) carshare program. Krahenbuhl hopes to see EVs comprise 50 percent of eGo’s fleet by 2023.

Adding EVs is just one way eGo upholds its commitment to sustainability. According to eGo’s member survey and national research, each car in its fleet replaces up to 13 personal vehicles. Additionally, members drive about half as much as they did when they owned a car and save roughly $6,500 per year in car-related expenses. Carsharing is light on the wallet and the environment; every year, each carshare vehicle prevents the use of 8,000 gallons of gasoline and precludes the emission of more than 73 tons of greenhouse gases.

To promote both sustainability and community, eGo strives to serve community members in all income brackets. According to eGo’s website, most for-profit carshare providers are concentrated in select neighborhoods, which only exacerbates transportation equity concerns. To avoid these issues, eGo engages in strategic partnerships with community and transit organizations.

One such partnership is the Roll Colorado campaign. Designed to facilitate an affordable car-lite lifestyle, the new program gives eGo members access to deep discounts on B-Cycle membership and free RTD bus passes. Krahenbuhl credits eGo’s nonprofit status with its ability to serve low-to-mixed income neighborhoods. Free of obligations to shareholders who are focused solely on profits, eGo can develop partnerships “that for-profit organizations can’t or won’t do,” Krahenbuhl says.

A commitment to community is what set eGo in motion — and what maintains the momentum 20 years later. Julie Heins is an eGo member who lives and works in central Boulder and uses eGo roughly once a week. For her, using eGo isn’t just about reducing her carbon footprint and saving money. By driving minimally and shopping locally she says, “The money I save on car ownership goes back into my community.” Not only that, but she feels that as a local business, eGo offers something special. “The people who run eGo are local and therefore knowledgeable about our community and what makes us tick.”

Jessica Thill is a content strategist who was pleasantly surprised to discover just how easy it is to live a pedestrian lifestyle in Boulder. When she relocated from Manhattan in 2014, she had every intention of using eGo until she bought a car. And she did just that — for four years. She bought a car this winter, after moving to Steamboat, an area far less conducive to a car-free lifestyle. While she acknowledges she spent extra time walking, taking the bus and planning for her eGo trips, she says, “I can’t tell you how much I hate driving and how much time I waste parking.” With eGo, parking is a non-issue; members return cars to the lot where they picked it up. And because members have to reserve trips in advance, they naturally drive less.

Thill planned trips strategically to maximize her time and minimize her trips; she says she was naturally more judicious when she paid for every hour she drove. And while sometimes (usually for multi-day trips) it made sense to rent a car, Thill appreciated the transparency and consistency of the carshare’s pricing model. “You can always evaluate what your cost is going to be, independent of supply and demand.”

Jacob and Martyna Kostecki use an eGo car several times a week and can walk to two eGo locations in 10 minutes or less from their home. While they typically take car trips in their personal car, sometimes the family needs to split up. In that case, one adult retrieves the car and brings it home, where the kids pile in.

Jacob acknowledges there is some extra work required as a one-car family but feels Boulder’s infrastructure makes it relatively simple. At the end of the day, he says all you need is the willingness to be “a tiny bit more creative.”