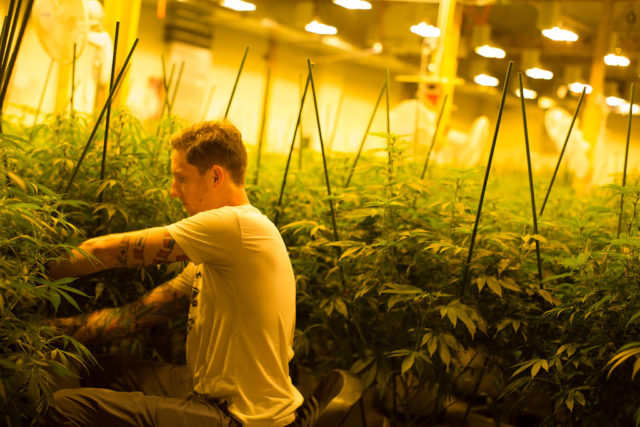 If there’s an Achilles’ heel in an indoor marijuana grower’s game plan, it’s energy consumption. The cannabis plant thrives when the kilowatts pile up — the result of round-the-clock man-made microclimates that maximize the production of both the herb’s quality and quantity. To give a comparison, the average marijuana grower in Boulder County has a monthly power consumption equivalent to that of 66 local households. So, from a business angle, finding ways to lower energy costs is high on many growers’ to-do lists. If only that were the sole issue.

There’s also the question of the environmental impact of growing cannabis. With coal still a major energy source, increased energy consumption translates into increased greenhouse gas emissions, namely carbon dioxide. In 2016, Boulder County growers increased their electrical consumption by 71 percent from the previous year, the equivalent of adding 1,300 households in the county.

While these numbers don’t establish a direct connection between CO2 emission and marijuana production, other data does. Evan Mills, a scientist at U.C. Berkeley, measures the cannabis carbon footprint in a number of ways, including at the consumer level. Mills calculates producing one joint worth of cannabis emits the same amount of CO2 as driving a 44-mpg car 22 miles. In a roundabout way, a joint equals half a gallon of gas, or three pounds of CO2 emissions; something to ponder the next time you light up and order take out.

And, should cannabis cultivation continue on its current upward growth curve, emission impacts could challenge local community commitments to greenhouse gas reduction. (The City of Boulder is committed to an 80 percent or better greenhouse gas emissions reduction by 2050 from 2005 levels). In short, energy use in the world of marijuana production is the elephant in the grow house.

Not to harsh your mellow. All is not doom and gloom. It’s true that many did not spot the scope of commercial marijuana production’s energy impacts in these legalization frontier days. But once the issue became apparent, both businesses and governments began to gear up, experimenting and implementing ways to reduce energy consumption. Some innovative solutions are now beginning to infiltrate the industry in the form of new government policies, research and technological advances.

In the government policy arena, Boulder County leads the state in the creation of an incentive program to promote grower energy efficiency. In 2014, the Boulder County Commissioners created the Energy Impact Offset Fund (EIOF), which gives all growers licensed by the County the option to either offset their electricity use with local renewable energy, or pay a 2.16 cent charge per kilowatt hour into the account. The monies can be used to promote conservation or finance energy offsets.

Brad Smith, the sustainability outreach and education specialist who works with fund participants, sees participation as a demonstration of growers’ commitment to environmental values. “Lots of credit goes to the cultivators participating in the fund,” Smith says. “In Boulder County, we have cannabis businesses willing to be the positive change we need to see.”

With accumulating fees, the next step is to decide how the funds are spent. To that end, a steering committee made up of growers, an environmental representative and officials from the County will meet on April 24 to decide how best to use the approximately $240,000 that has accrued since implementation. (The meeting at the Boulder County Courthouse starts at 5:30 p.m. and is open to the public.)

The Boulder County program may become a model for other government policy-makers going forward. The City of Boulder has already followed suit, establishing its own EIOF in 2017. Still, there are no statewide energy efficiency regulations that are specific to growing marijuana. And some local ordinances can actually contribute to high energy consumption. In Denver, cannabis growers are confined to industrial areas, which means most are in converted warehouses — older buildings with high energy use. If growers were allowed to choose agricultural or commercial properties, it could result in lower energy demands. For example, it could create an option for outdoor or greenhouse cultivation, where natural sunlight becomes a part of the energy-source mix.

While the fine-tuning of local policies and broader regulations will continue to influence energy usage in growing cannabis, there are others who see redemption in technological terms. Lighting systems in most grow houses use special high-intensity bulbs that gobble up kilowatts. At the end of the day, it amounts to around 25 percent of growers’ energy use. Enter the low-energy-consuming LED light. Its upfront costs are higher, but the energy savings and longer bulb life offsets the initial investment. And, Xcel Energy offers rebates of up to 40 percent for new LED installations.

Early LED lights didn’t produce high-yield crops, so growers initially remained wary of converting their systems. But, with an expanding cannabis industry, LED companies have the incentive to create products to meet the market demands. Now, improved LEDs seem to be gaining wider acceptance with some growers, who use them at a minimum during the vegetative growth stage of the plant’s cycle.

Another viable option is reverting back to the use of natural light in cannabis cultivation. This is where greenhouses become a hot topic.The industrial cannabis greenhouse is a labyrinth of machinery that must maintain narrow ranges of temperature, humidity, CO2 concentrations and timed light exposures. And, since the glass-enclosed structures are poor insulators, heating systems must be fired up when the Colorado winter sets in. Ron Flax, building sustainability examiner for Boulder County, has access to grower greenhouse installations. “The evidence is not clear yet that greenhouses are a better energy option,” Flax says.

Mills thinks he has proof that the hyper-industrial greenhouse still falls short and creates a false hope. In a report published in February, Mills found that mechanized greenhouses outperform indoor greenhouses with a 25 percent lower energy footprint. “Hyper-greenhouses are still highly energy intensive,” he writes in the report. “There are greener ways to do this.” Mills goes on to describe a redesigned building that marries the best features of greenhouses and indoor operations that approaches “net-zero” in energy requirements.

Surna is a Boulder-based company that specializes in high-tech solutions for indoor cultivation. Its work in this field may represent the future of growing cannabis indoors. The company builds hybrid structures with transparent roofs and incorporates state-of-the-art energy and water-conservation systems in a sealed environment. Surna reports that independent testing shows energy reductions of 50 to 75 percent in its hybrid greenhouses compared to comparable indoor facilities.

Brandy Keen, an executive with Surna, says, “Our approach enables cultivators to combine energy efficiency with water conservation. Not only does it reduce costs, it’s just the right thing to do.”

Keen, who was a member of a task force that recently published a best-practices guide for growers, also has her eye on the big picture. She thinks further research is needed to better understand the industry’s place in the overall economy. “I have yet to see a study that compares how much money a particular industry pumps into the economy and how much energy it consumes,” she says.

So Boulder, in many ways, appears to be at the forefront in tackling the energy problem in Colorado. Bonnie Bahlmann, an associate with a Boulder County cannabis-affiliated business and member of the EIOF steering committee, sums up the current picture: “Cannabis cultivation and energy responsibility don’t have to be mutually exclusive,” she says. “Boulder has a real opportunity to become a model in a collaborative way without adding undo and costly regulations to an already heavily regulated industry.”

Bruce Hoppe is an award winning journalist and adjunct instructor in the LEAP Institute for the Arts at Colorado State University.