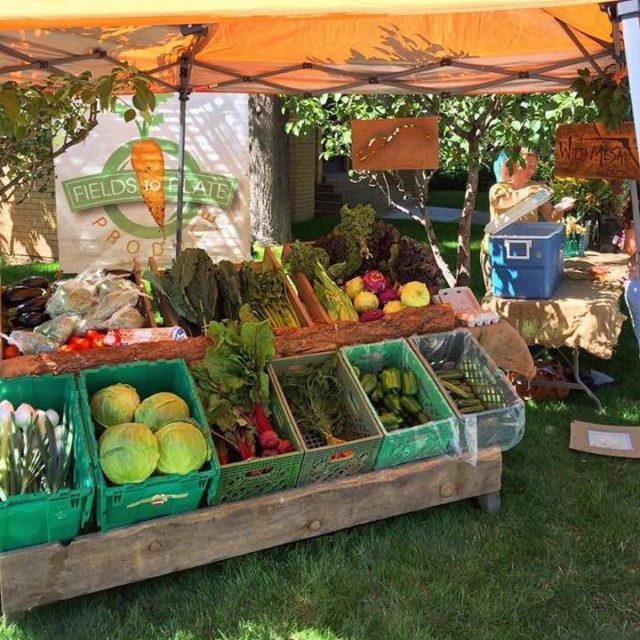 Courtesy of Fields to Plate Produce

Can you hear us OK?” Max Fields inquires for both he and his agri-business partner James Plate over speaker phone. “We’re just out harvesting some onions.”

Fields and Plate don’t fit the mold of traditional farmers. Friends since kindergarten, they both grew up in Denver’s urban scene where the closest thing to working the land was potting pansies in the summer. Neither of them comes from genealogy that provided crop production knowledge or farming skills, never mind land and equipment. Despite that, these young, first-generation farmers formed Fields to Plate Produce in 2013 and have been providing fresh vegetables to Durango and surrounding communities at farmers’ markets, restaurants and grocery stores since.

Fields and Plate are true agri-preneurs. The only two employees of their business, they handle all operations from seed to sale, as well as build relationships and business development with chefs, community members and other start-up farmers. Their business model focuses on food sustainability and education, raising awareness for local food and agriculture products and reducing their carbon footprint and eliminating produce waste.

Also, they grow crops at an altitude of 7,600 feet in Hesperus, Colorado, located in the San Luis Valley — the largest and highest commercial agricultural valley in the world.

“Growing up in the city, there was a huge disconnect with the ag[riculture] business that we weren’t able to appreciate until we were fully immersed in the production side,” Plate says. “We’ve always had an interest in plants and growing food, and have seen that our current industrial food system is not working. We’re seeing opportunities and how we can do it better through innovation and education. At the end of the day, though, it comes down to producing food. If we’re not producing, it’s all just talk.”

Fields and Plate acquired land through an agriculture incubator program while attending Fort Lewis College for Agriculture Business Administration. The program allots land for crop production to applicants on a five-year rotation and Fields and Plate were one of the first participants. Fields and Plate currently farm on a 2.5 acre plot from the incubator program where they’ve grown carrots, Brussel sprouts, onions, potatoes, winter squash, turnips, tomatoes and beets. Additionally, they are leasing a 1 acre, 100 percent USDA-certified organic plot of land primarily for potato production.

“There’s such a demand for local food production that our main focus has been to produce enough food to feed our communities,” Plate says. “But we also want to make an impact with the consistency and quality of our produce.”

Not only are they focused on production, with a yield goal of 30,000 pounds this year alone, but they also acknowledge the significance of providing local produce year-round as opposed to just during the short growing season. They are able to do this through the winter months by root cellaring, a traditional food preservation method that balances temperature and humidity to keep produce from freezing or spoiling for extended periods of time.

“Root cellaring has been our niche of utilizing old traditional techniques of farming,” Fields says. “It’s something different, which was a big push for us. We’re able to provide and service buyers at times when other local producers don’t have product to take to market.”

The main produce they plan on cellaring are root vegetables, including potatoes, carrots, beets and turnips.

“We’re working with the environment to produce as much as we can in the short growing season and then preserving that crop through the winter months,” Plate added. “This is a key component in our production model, especially as our region specifically is considered a food desert.”

The San Luis Valley, a rural six-county area in southcentral Colorado, is considered a food desert due to transportation access and accessibility of grocery stores. According to the Colorado Heath Institute, 759,000 Coloradoans, including 80,000 children, live in food deserts — defined as areas lacking in access to fresh fruits, vegetables and other healthful foods. The Colorado Health Foundation reports that rural counties, particularly in the western U.S., face the greatest challenges when it comes to access to adequate healthy foods. Of Colorado’s 64 counties, 24 are designated as rural, 23 are designated as frontier (fewer than six people per square mile), and 17 are designated as urban. Fields and Plate’s preservation method and business model is an effort to provide food for at least some of the families living in the San Luis Valley.

“There’s a lot of care that goes into these crops to ensure the shelf life they’ll be able to have so that people have the opportunity to eat local, fresh foods when that would normally not be an option,” Fields says.

Although Fields and Plate are aiding the community, this start-up, first-generation agri-business is not without its challenges, much of which comes down to capital. Or lack thereof.

“Farming is a really expensive thing to get into and it takes years and years to build up assets,” Fields says. “From the first-generation farmer aspect the question is, ‘How do we get this up and running without multiple generation access?’ There’s not a lot of funding with farmers like us.”

One step they’ve taken to further marketing efforts is by being a part of Colorado Proud, a Colorado Department of Agriculture program that generates awareness for, and encourages consumption of, local food and agriculture products.

“The program is designed to help farmers like [Fields and Plate] market their products and reach their audience, especially with businesses starting from the ground up,” says Wendy White, marketing specialist with the Colorado Department of Agriculture Markets Division. “The Fields to Plate guys are doing amazing things at high altitude. They have a clear passion for growing products, because they started with nothing and are growing a business. They’re contributing not only to the community, but to the Colorado agriculture industry as a whole.”

Fields and Plate have only one year left in Fort Lewis College’s agriculture incubator program before their phase is up, but they’re already looking at leasing options on larger plots of land to continue and scale their business.

“Our strategy is to think five to 10 years down the road, expand our production, market really smart, and not have a single drop of waste on the farm,” Plate says.

As they talk about the future, they continue harvesting spring onions that won’t be stored for winter — they are weeding out onions that might normally be considered product waste. Fields and Plate, however, see opportunity.

“We try to add value to things that might not have value to other farmers,” Fields says. “We make an added effort to get the most out of everything we have, even out of what might be considered ‘waste.’”

Max Fields and James Plate are challenging farming norms in more ways than one, and that’s just the way they like it.