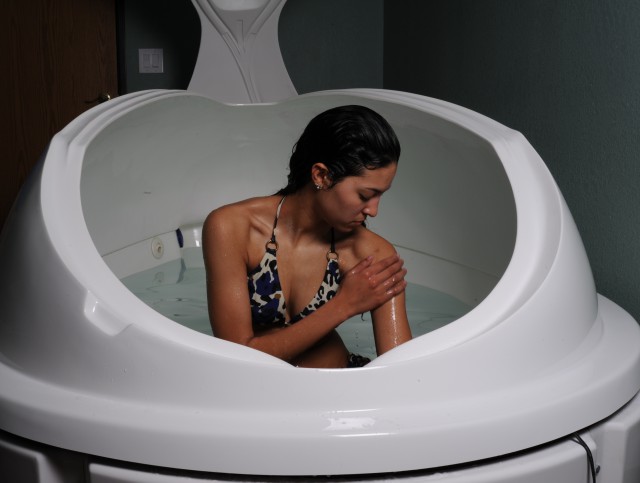 There’s a tricky conundrum for the writer who happens to find himself in the position of crafting an article about sensory deprivation. In order to fully appreciate the intended effects of the session, one has to allow the mind to wander, to turn inward. Yet, journalistic duty requires attention to details, at least enough to be able to accurately recount the experience. And it is certainly interesting to be part of a story where the majority of the research would be done in the nude.

Float Tank Therapy is an evolution of principals first espoused by neuro-psychiatrist John C. Lilly. He sought to create an environment that reduced as much sensory input as possible to unburden the mind from the constant stimulation that must be filtered in order to function. In 1954 he created his first isolation tanks. Pitch dark and perfectly silent, the tanks provided a sense of weightlessness by adding large amounts of Epsom salt to body-temperature water. Lilly’s efforts to measure brain activity were rooted in hard science and were carried out with clinical precision. While he was able to harvest enough data to validate his theories on brain waves, his experiments strengthened a growing trend of exploring the extreme limits of consciousness.

Peter Suedfeld and Roderick Borrie of the University of British Columbia looked at the therapeutic benefits of float tanks in the 1970s and eventually dubbed their process “Restricted Environmental Stimulation Therapy,” or REST. Their research had some unexpected results, with patients reporting diminished cravings for alcohol and bouts of uninhibited creativity. For many suffering with painful diseases such as multiple sclerosis and fibromyalgia, longlasting relief from joint pain and increased feelings of energy were cited.

And now it was my turn in the tank. Danny Clarke, owner of Cloud Nine Float Center in Boulder, generously offered several float sessions.

“Float tanks are really a place to relax,” explains Clarke. “There are many proven benefits to floating — less stress, increased energy and relief from pain. Floating is effective at negating jet lag or simply restoring energy. There are people from all walks who enjoy float sessions and many of our clients come back for repeat visits. It appeals to those seeking both traditional and alternative therapy.”

I consider myself a bit leery of many of the claims of alternative medicine, but given isolation tank’s credible scientific lineage, I was intrigued. I purposely saved researching the subject until after a series of floats, as not to taint the experiment. Whether I would feel safely ensconced in a simulated womb, drift through the cosmos or simply churn in salt water for 90 minutes was up in the air. All I knew is the tank itself initially looked intimidating. Thankfully, the attentive staff at Cloud Nine helped ease my fears.

The modern tank I would be soaking in was spacious and safe, holding 10 inches of water that would maintain a steady temperature of 95 degrees, the natural temperature of the skin. The water is filtered and sterilized for each session and overloaded with Epsom salts, which make floating on the water like a cork effortless. There are three large buttons in the chamber: one that controls the hydraulic door, one that turns on and off an inner light, and a call button to communicate with the employee monitoring the session.

I admit a bit of apprehension as my mind created worst-case scenarios where the doors locked shut or the air pump mysteriously stopped functioning. These fears were unfounded, however, as the door never actually locks, though it does seal shut with authority. Clients have the option of relaxing music, nature sounds, audio books, whatever you like — though the intended experience is best done in silence. I opted for the standard procedure of 15 minutes of music that would gradually fade into silence, then two minutes of calming music at the conclusion of the 90-minute session. The inner light would turn on and the door would automatically open at the end.

One small bit of advice: if you have swimming earplugs, it’s a good idea to bring them. The float center provides foam earplugs and an earwash solution for after the session, but I found my rubber swimming earplugs to work best. Also, try your best not to touch your face in the tank, the salt water in your eyes will burn with the heat of a thousand suns (though there is a squirt bottle of fresh water and a towel in the tank with you).

After showering, I stepped naked into the tank. The initial sensation of floating on the water was unexpected and neat. By keeping your arms out to the side, you can stabilize your float and many experience weightlessness. While you have the option of keeping the door open (all the way or just a crack), I summoned a bit of journalistic courage and let the large tank door close tightly. With one more deep breath, I turned off the inner light and tried to relax.

At first, my mind raced. I nudged up against the sidewalls a bit as my body reflexively tried to use the mechanics of normal water density to float. The trick of course is to fully relax — you can’t unintentionally flip over in the tank, even if you fall asleep. It took a while to relax my neck enough to let my head yield to the natural floating power of the salt water.

It didn’t take long to find a comfortable position, though I was aware I was floating on water and could still hear the peaceful music. I had the sensation not so much of being weightless but more so like I was drifting along in a river. A few times, I expected to bump into the side of the tank, the sensation was so vivid. And perhaps I was starting to feel a little bored. But then I began to drift closer to sleep.

What happened next was unexpected and fairly remarkable: Since sleep was looming in the dark and quiet tank, my mind went to its normal pre-sleep places: I’m playing major league baseball, or I’m the guitar player for Rush, or winning the lottery — standard issue fantasy land stuff. But rather than fall completely asleep, my brain took a wonderful, lucid detour to that place just before sleep where controlled thoughts slip away and the brain hovers between awareness and the subconscious. It was a familiar sensation and one I welcomed on nights when sleep was momentarily interrupted or on mornings where vivid dreams seemed to come in waves, closer to the surface of my consciousness rather than buried deep in REM sleep.

I hesitate to say I had visions, but there were sensations of things I enjoyed: running alongside my dogs (at their speed for once), mountain biking difficult trails with ease — both somewhat float-like sensations. And there were friends, some not thought of for years, drifting into my mind and I began crafting beautiful, unfiltered and bold letters to them in my thoughts. These were all somewhat normal musings for me, but they came more vividly and less inhibited. I could not choose how they came or who appeared. And it was wonderful.

What had felt like a lengthy stay in the tank turned into a meditation, broken by the automatic opening of the tank door. I certainly hadn’t had any sort of hallucinations (as some report) but my mind had definitely gone into some fascinating places — and stayed there long enough that I could enjoy it. And I objectively felt … better. Rested, sharper, my mind a bit quicker and more focused. Almost like caffeine without the jitters or anxiety.

As it turns out, that place I described as being on the conscious threshold of sleep is measured by science as being in a theta brainwave pattern.

It is worth mentioning that I got “better” at floating after the first session and that repeat visits are not a gimmick to make more money — the experience is enhanced as you get used to the tank itself. Of the friends I spoke with who had been in float tanks, nearly all had a positive experience. The effects I felt weren’t necessarily profound, but there was a noticeable spike in uninhibited thoughts, improved energy and creative motivation — and it felt pretty good.

The next time I cross several time zones, I hope to revisit the tanks to see if they can alleviate jet lag. Because my own skeptical concerns were countered with a genuinely pleasing experience, I’m willing to give it a try. Floating can be a bit weird at first, maybe a little scary and perhaps boring at times, but I can’t deny my mind did wander in wonderful ways. Perhaps the brain appreciates the opportunity to let go of all the grunt work and illuminate some of the dusty, forgotten places that it can normally only visit in the deep sanctuary of sleep.