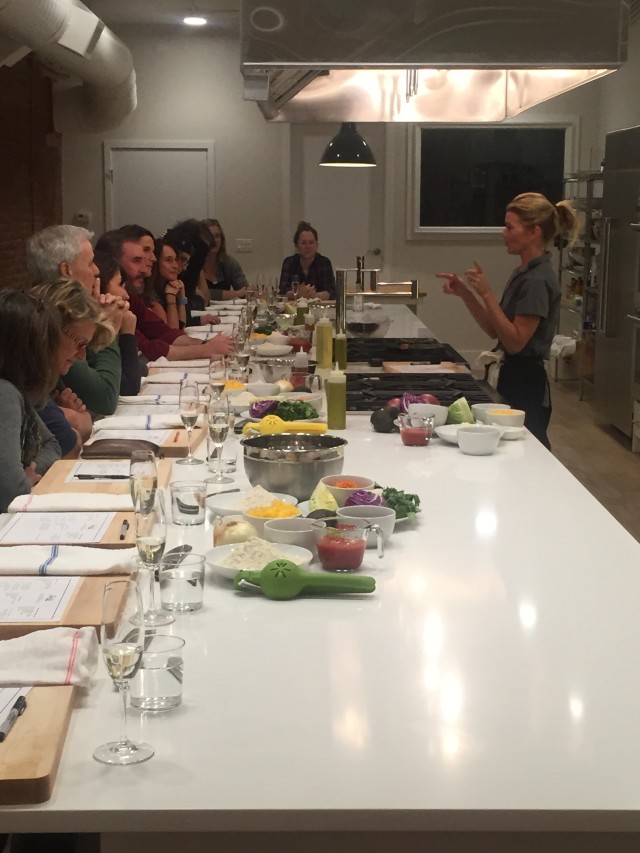 “Our mission at Food Lab is to help enhance the community’s level of culinary skills and food and wine knowledge in a fun, entertaining and informative way,” Eaton says. The Lab is a place for accomplished local chefs to showcase unique recipes and menu ideas, and for curious consumers to learn from their expertise.

The Food Lab opened its doors Dec. 15 of last year, although the idea had been percolating for years.

“The idea for Food Lab was born five-and-a-half years ago, around the same time my second child was born,” Eaton says. “It took a lot of planning, traveling to different cooking schools across the country, determination, fear, passion and time… that was all before I even signed the lease.”

Eaton’s food roots extend deeper than that; she became a vegetarian at age 7, moved to Boulder to attend the School of Natural Cookery at 23, and worked as a personal chef for 15 years thereafter. Growing up in Phoenix in the ’80s, there might have been some Kraft Macaroni and Cheese and Lucky Charms thrown in the mix, and Eaton isn’t afraid to include those early experiences in her lifelong food diary.

The spirit of open-minded exploration is infused in the Food Lab — from its warm and inviting physical space, to the range of classes offered, to the libations on tap. Eaton wanted the space to feel like a home kitchen (albeit a very nice one), so students cook on residential appliances and can enjoy a glass of wine or a beer while chopping vegetables. Chef and Food Lab instructor Kelly Bailey Newlon thinks this is what makes the Food Lab unlike other cooking schools in the area.

“The Food Lab totally fits into Boulder,” Newlon says. “It’s a cool, sexy space with unique classes. The wine, beer, bubbles on tap knock it out of the park. It really seems as though it has become a great way for parents especially to have a fun night out. I have noticed that the classes seem far more social and relaxed, fun. There is a lot more rock ‘n’ roll in the Food Lab than other similar businesses offering the same thing. This is important when you are taking a night out.”

The 6-9 p.m. classes do lend themselves well to a night out, whether it’s date night, girls’ night or a chance to meet other food-minded folk. On the weekends there are often classes during the day; both evening and morning classes cost $75. Most lessons are hands-on (versus demonstrational) and run the gamut from beer can chicken to Mexico City street tacos. This diversity of offerings makes it fun for instructors and students alike.

“I have had the opportunity to cook for holiday parties for local Boulder businesses, a holiday family get-together — the entire family came in and took a class together, it was super fun — a sushi class, and a kid’s class,” Newlon says.

Eaton says sushi, Mexican and pasta classes are always popular (most classes do sell out, check the website for availability); and, since this is Boulder, raw fish and seaweed aren’t just interesting to the mature palate.

“Boulder kids love sushi!” Eaton says. “And a lot of them know what they are doing.”

The Food Lab offers quite a few options for kids, from birthday parties to after-school classes to an eight-week program in which they learn knife skills and table manners in addition to how to make basic meals from scratch. At the end of the program, they invite their parents to the Lab and cook a full meal for them.

With kids and grown-up classes well covered, Eaton also extends the Food Lab’s offerings to groups. Boulder being Boulder, this could mean bachelorette parties, cycling teams, Google execs or the entire staff of a small business. Depending on the groups’ desires, this could also mean that classes are rowdy (within reason) wine tastings, strict gluten-/dairy-/legume-free cooking, a sit-back-and-relax demonstration of regional French cooking or a full-on battle.

“My favorite is the Iron Chef challenge for private groups or corporate team building events,” Eaton says. “Each team gets a different box of food and has 15 minutes to write their menu and barter with other teams, then one-and-a-half hours to create two dishes. The winning team is picked on team effort, creativity and taste.”

We’ve all seen it before: you’re at a party, the furniture in the living room has been rearranged so that there’s space to stand and mingle, and the sliding doors are open for spilling onto the back porch. But where is everybody actually hanging out? The kitchen. The Food Lab captures our propensity for gathering in the warm glow of smells and sounds that emanate from our favorite room in the house and invites you to stay for as long as you’d like.