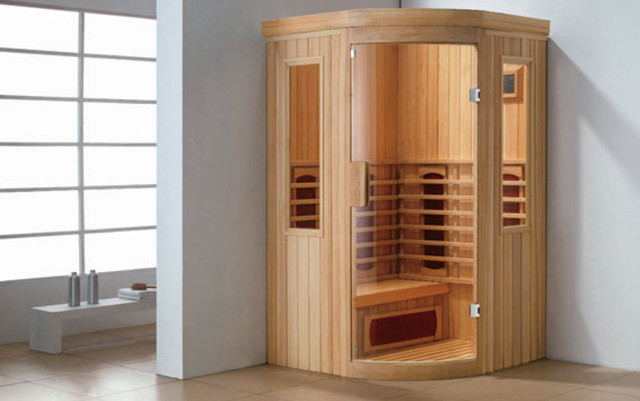 I’m sitting in a wooden box, about 5 feet tall, 3 feet deep and 4 feet wide, lined by five infrared heaters that are pushing the temperature past 100 degrees. There’s a mineral drink in my hand to prevent potassium deficiency as I sweat, which causes side effects like nausea, fainting and heart palpitations.

This is an infrared sauna, which, like traditional or wet saunas, increases core body temperature, inducing sweating and increasing heart rate. While wet saunas rely on hot steam to do this, infrared saunas use light to warm the body directly without warming the surrounding air. This means an infrared sauna runs cooler than a wet sauna, while still providing that sweaty experience people seek.

“A wet sauna, which is typical, makes you think that you’re sweating more than you actually are,” says Donna Sigmund of East-West Wellness in Boulder, which houses an infrared sauna. “It’s the moisture that is beading up on you.”

Sigmund has operated her infrared sauna since 2009, after she discovered them through the Fellowship of Anti-Aging and Functional Medicine. She says the infrared heat, rather than simply warming the surface of your body, penetrates three to four inches deep to extract toxins from fat that a wet sauna can’t.

Some of the claimed benefits are largely anecdotal. The studies that have been done on infrared saunas have tended to be small and short-term, using dozens, not thousands, of participants. Much of the research has centered around people with existing conditions, which has limited the knowledge about how infrared saunas effect relatively healthy folks.

Sean Mullen, director of the exercise, technology, and cognition laboratory at the University of Illinois at Urbana-Champaign, told Yahoo Health in January 2016 that “plenty of research suggests that saunas — dry, wet, or infrared — have beneficial effects on lowering blood pressure.”

“The sauna has an oxidative effect,” Mullen said. “Blood is going out to your extremities; your pores open, allowing you to sweat; and heart rate increases in an attempt to cool your body down.”

As to the detoxifying effects of an infrared sauna, not everyone agrees. Roger Clemens, an expert in food toxicology and an adjunct professor of pharmaceutical sciences at the University of Southern California, spoke about infrared saunas with Scientific American in October 2005. Clemens told journalist Gary Stix that the most efficient system for detoxification is internal, not external — the kidneys, liver, gastrointestinal tract and immune system.

“Except when one of the major organs breaks down, there isn’t a medical device or any diet that can accelerate the body’s natural process of detoxification,” he said.

When I get into the sauna at East-West Wellness, it’s set to 120 degrees Fahrenheit. I sweated more in that 20-minute session than I ever have in hot yoga. After a couple minutes, I was drenched, my towels were soaked and my tank top stuck to my chest. It was all I could do not to sweat all over my notebook. Despite that — and I’m normally very uncomfortable when I sweat a lot — the sauna was completely relaxing. My muscles felt loose and relaxed, like I’d just come from the chiropractor, and I felt more mentally and emotionally upbeat when I left than when I entered.

Infrared saunas may not replace traditional medical care, but in my time in one it felt like a good supplemental treatment, or even a preventative one. It’s worth a try, even for only a few minutes, to see if it’s a viable stress relief for you, as it was for me. There are a number of places around Boulder County to seek infrared treatments, such as New Life Wellness Center, Holistica, Stillwater Healing Arts Clinic, Firiel Skin Care and Boulder Sports Acupuncture.

You may also find stress relief from sonic healing practices.

On another winter day in Boulder, I’m with Ray Stewart, who operates Boulder Sound Therapy out of his home. Here he practices acutonics, or the practice of healing through sound and vibrations. This practice is also known as sonopuncture or sonic healing. Stewart’s been interested in healing since he was a corpsman in the Vietnam War, and in alternative medicine since he started practicing out of the service. First it was alchemy. Then, since a friend convinced him that it wasn’t “new-age Boulder stuff,” acutonics.

Stewart’s workspace is in a room on the side of his house, off of his entryway and past a floor-to-ceiling photo mural. One wall is lined with books about spirituality, world religions and healing techniques. Opposite the bookshelf is a desk, where a computer is playing a video of Royal Raymond Rife, a somewhat controversial pioneer of alternative medicine.

There’s a table at the far end of the room with all manner of drums and metal bowls lying around it. These are a part of Stewart’s treatment process, as are the dozens of tuning forks that hang from the door. The treatment — at least, the physical part — works like this: I lay on the table, and Stewart taps the tuning fork on a drum. It emits a high-pitched ding, then a low, vibrating hum, and Stewart puts it on a nerve center on my shoulder. The tuning forks go on acupuncture points all over your body, with the goal of relaxing you and easing you into a meditative state.

Before clients get on the table, Stewart asks them about themselves; about their job, their sleep patterns, their digestion, their stress level. They vocalize how they feel before treatment, then how they want to feel after.

“Your thoughts affect your mind, and your mind shapes your experience,” Stewart says. “My intention is to guide the client into a region of thought whereby he or she can perceive a healing vibration.”

That mental aspect is the other part of Stewart’s practice — the subconscious is so powerful, he says, that letting it take over can allow it to help ease physical or emotional pain. His clients include people with back pain, depression and terminal cancer. The latter don’t come for a cure — rather Stewart says the meditative aspect can help them mentally cope with the dying process.

In that way, Stewart says, his practice is complementary to traditional medicine, which he calls “chemicals, surgery and magic pills.” Those, obviously, have a medical utility that sound and vibrations simply  don’t. Stewart, then, fills in the gaps with a personal touch, and attention to the mental and emotional needs of the patient, that he feels traditional medicine often lacks. He calls this combined approach “integrative medicine.”

“I’m a health aid,” Stewart says. “We work together with Western medicine, but this is more about helping the patient help himself.”

There are a number of options for a sonic healing experience in Boulder County, such as jlounge Day Spa, Vital Vibration, Solstice Health, Hands of the Heart, Musical Hands and Divine Rebellion.