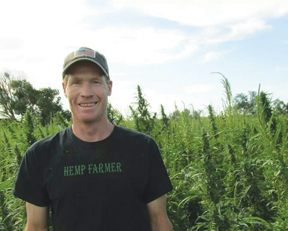 What if we just woke up one day and corn was outlawed?” asks Eric Hunter, president of the Rocky Mountain Hemp Association. “Imagine if 80 years down the road corn was illegal. There go chips, corn syrup, plastic cups. Hemp is just as harmless as corn — why should it be illegal?”

Although illegal at the federal level, small steps are being taken toward legalization of industrial hemp farming in the U.S. In 2014, Colorado and Kentucky regulated legal hemp cultivation as part of the Farm Bill, allowing growers to register farmland dedicated to the crop. As of August 2014, Colorado had 55 commercial registrants with 1,461 acres and 73 research and development registrants with 237 acres.

Despite the number of acres and individuals registered, many fields are void of the crop due to seed accessibility issues. Of the 1,698 registered Colorado acres dedicated to cultivating hemp, 300 of those belong to Ryan Loflin’s farm in Springfield.

“Unfortunately, I’ve only been able to plant a little over six acres,” he says. “I wasn’t able to get seed — it got held up at customs.”

Loflin joins several registered farmers facing barriers during the inaugural year of hemp farming in Colorado. Ron Carleton, deputy commissioner for the Colorado Department of Agriculture, explains this is due, in part, to regulation inconsistencies. In addition to the Farm Bill at the federal level, the passage of Amendment 64 in Colorado legalized the cultivation, processing and sale of industrial hemp and allowed farmers to register with the state either as commercial growers or research and development growers.

“There are difficulties getting seeds because industrial hemp has essentially been illegal since the 1950s,” Carleton says. “The only seed they can get is from other countries because of the conflict with state versus federal law. Hemp and marijuana are considered to be one in the same, and seeds cannot be imported without an import permit from the [Drug Enforcement Agency]. And they’re not issuing any.”

Hunter says another hurdle lies with seed breeders refusing to export their seeds.

“Because it’s illegal, there’s no patent protection; they would have to be registered as part of the national seed database,” he says. “Until that happens, there’s really nothing to do.”

If farmers are lucky enough to get ahold of seeds, it’s not cheap. Seeds are typically imported from Canada, China and the European Union. Loflin estimates that seeds are being sold from Europe at $4 to $5 per pound and has even heard of an Italian seed going for $12 per pound. Last year he imported about 1,500 pounds of hemp seeds from Europe to plant 300 acres. The seeds were shipped in 55 pound bags for $250 per bag. He planted six acres this year with seeds he harvested last year.

“This year, I tried to do it completely legitimately through the Farm Bill,” he says. “I want to focus on seed production and establish good, climatized seed genetics. We’re not sure what the policy will be next year and getting seeds could be a problem again.”

Even if seeds are acquired and planted, farmers gamble with the potential potency of the hemp they’re cultivating. Under Farm Bill regulation, the Department of Agriculture reserves the right to test the crops to ensure the delta-9 tetrahydrocannabinol (THC), the psychoactive ingredient in marijuana, is below 0.3 percent. If a crop tests beyond the limit, the farmer cannot legally harvest the hemp and may be required to destroy it, resulting in a major financial loss. With high prices and strict regulations, the reintroduction of hemp in Colorado has been difficult on farmers.

“In the first developing years of hemp plants being re-established in American soil, there could be THC spikes and changes,” Loflin says. “I think if they raised the level to 1 percent that would give every farmer peace of mind not having to worry. It costs me $300 per month just to water — if you put all that money into it and are told to destroy it in the end, it’s a big loss.”

The United States has historically had a love-hate relationship with Cannabis, the genus encompassing both hemp and marijuana. In 1937, Congress passed the Marihuana Tax Act which effectively began the era of hemp prohibition. The tax and licensing regulations of the act made hemp cultivation difficult for American farmers. The bombing of Pearl Harbor in World War II, however, was a game changer. It cut off foreign hemp from the Philippines, so the federal government subsidized and encouraged hemp cultivation during this time, leading farmers to grow more than 1 million acres. After the war ended, the government quietly shut down all hemp processing plants, and the industry faded away again. And, in 1970, the country severed all ties with the crop by categorizing all cannabis as a Schedule I substance per the Controlled Substances Act, freezing any sort of hemp cultivation, processing facilities and consumer sales.

Hunter believes reverting back to federal legalization would mark the end of what he considers an unnecessary era.

“Legalization would be a return to normalcy,” he says. “I laugh when they say legalization is an experiment — prohibition is the experiment.”

Although hemp is a cousin to marijuana, the psychoactive constituents are a notably smaller percentage of hemp’s chemical makeup. Recreational and medicinal marijuana have a higher percentage of THC usually ranging from 3 to 30 percent, whereas cannabis with THC levels of 1 percent or lower is considered hemp. Hemp also has a higher ratio of cannabidiol (CBD) to THC. Cannabidiol is found in both hemp and marijuana and is a non-psychoactive compound typically used for medical purposes.

The most famous example of medicinal hemp use is that of Charlotte Figi, a 5-yearold girl who suffers from Dravet syndrome, causing her to have hundreds of seizures every week. In 2012, a strain of hemp was developed in Colorado Springs to help Charlotte. Through cross breeding hemp varieties and landrace strains of cannabis, a new strain emerged yielding extremely high levels of cannabidiol and very low levels of THC, 20 percent and 0.5 percent, respectively. Consumed in hemp seed oil form, this strain eased Charlotte’s seizures from hundreds per week to only a few per month and was christened Charlotte’s Web.

Using Charlotte’s example and research studies on the medicinal benefits of hemp oil, representatives are going to bat at the federal level to separate hemp from marijuana by legal definition. The Charlotte’s Web Medical Hemp Act of 2014 was introduced to Congress on July 28. According to the Act, it would exclude “therapeutic hemp” and “cannabidiol” from the definition of marijuana in the Controlled Substances Act.

The separation of hemp from marijuana in the Controlled Substances Act could reclassify or remove it from Schedule I classification, potentially leading to the federal legalization of hemp. Farmers would then be able to freely cultivate the crop on a larger scale. Colorado farmer Loflin sees that as a way to create employment opportunities and improve the economy.

“Ultimately, this is a job-creating crop, and what we need more than anything right now is jobs,” he says. “Leading the nation is pretty exciting — we’re right at the tip of the iceberg as far as the future goes. Farmers have been struggling for years, and this is giving them hope again.”

With Colorado on the forefront of the changing hemp industry, Deputy Commissioner Ron Carleton also sees promise for the future of hemp farming despite the hurdles many farmers faced in 2014.

“Industrial hemp has a lot of promise and potential as a commodity crop for our farmers,” he says. “I think it may take us a little while to get to the point where a lot of it is being cultivated and economically viable, but it has every intention to be a profitable crop.”