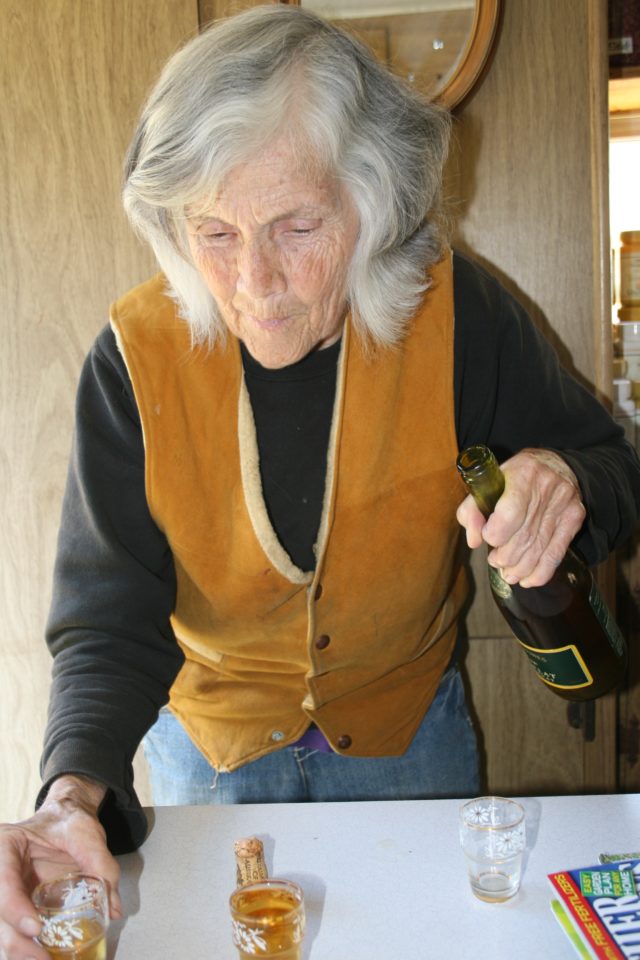 It’s early September, and I’ve made the gritty drive up Lefthand Canyon and Lickskillet Road to arrive at Mary’s cabin in Gold Hill, 11 miles west of Boulder. A weekend houseguest has joined me for this Sunday expedition, and we park on a hushed dirt road and gently push our way through Mary’s tilted gate.

We’re greeted by Iris, a cheerful Australian Shepherd who — Mary explains later — was meant to be miniature but whose genes missed the memo. Iris is a sizeable bundle of snout and fur and is thrilled to have visitors. She bounces through the tall grass as Mary leads us around the side of her house to an unobtrusive camper parked in the backyard.

Petite in jeans and hiking boots, Mary’s gray hair ends in a wave at her shoulders. She wears a long-sleeved black shirt and brown leather vest. Against her tanned face, her eyes shine like bright pennies.

Mary’s backyard is a study in mountain life. She keeps chopped wood in a hutch, four hens in a tarpaulin-covered coop. They keep her in eggs all year, she says, even during the winter. A half-tree, dark and leafless, juts upward near the fence. A china cup hangs from the tree on a nail like a bangle. Below the cup, an animal’s jawbone arcs against the tree like a bleached moon.

We settle ourselves at a small table inside the camper. Mary leaves and returns with a dark green wine bottle, repurposed more than three decades ago as a vessel for her homemade dandelion wine. She pours a taste into each of the shot glasses.

The wine is a buttery yellow. On the tongue, it conveys subtle herbal and citrus notes and a honey-like sweetness. This particular bottle has developed into a dessert wine, and as we sit in Mary’s backyard — September’s scent breezing through the open camper door, hens chattering nearby and Iris sitting observantly at the threshold — I feel very much like I’m swallowing sunshine itself.

Mary has three or four such bottles tucked away in her cellar, having forgotten them after that particular long-ago bottling. It was back when Mary had been in Gold Hill for almost 25 years. Now she’s been here for 54, having moved up the canyon with her husband in 1962 following a stint in university housing at Boulder’s Chautauqua Park.

More than a hundred years old, the cabin has witnessed the raising of Mary’s two daughters and her initial efforts at making dandelion wine.

“That was back when you bribed the kids to go pick a gallon bucket of dandelion blooms,” she explains. “You just use the yellow part, not the green. You wash it and start the process with boiling water. One of these magazines has the whole process,” she says, gesturing to a stack of yellow Capper’s magazines she keeps on the table. “And then, you know, you put it in a stone crock and let it ferment — add your sugar or honey yeast, and oranges.”

Considered by many to be a pervasive weed, dandelion is revered by others for its health-giving properties. Well-regarded by ancient cultures, dandelion tonics have traditionally been used to support the liver and the digestive system and to remove toxins from the bloodstream. A gentle diuretic, dandelion was reportedly used by Persian pharmacists as early as 900 A.D. and is believed to have been intentionally transported to North America by Europeans who prized it both for its medicinal qualities and its value as a reminder of their native homes.

“Dandelion” is a corruption of the French name for the flower: dent de lion. Meaning “lion’s tooth,” the name is a reference to the plant’s serrated leaves.

Early North American settlers, accustomed to seeking nutritional support from seasonal plants, incorporated dandelion leaves into salad, dried and ground its roots to brew a coffee substitute, and plucked the dandelion’s bright yellow blooms each spring to make wine. Aged through the summer and autumn, the wine could be ready to drink by Christmas, cheering settlers through the harsh winter months.

Raised on her family’s farm in south-central Kansas, Mary grew up during a time when such self-sufficiency and seasonal alignment were critical to a family’s survival.

“You could dress a chicken, you could hoe the garden, you could drive the tractor, you could milk the cow, you could get on the horse and help herd the cattle,” she says, cataloguing her childhood responsibilities. “Putting up food was part of it, too. Canning — picking the wild plums and apples and whatever was available at the time.”

There was a diesel passenger train, too, nicknamed the Doodlebug. “You put the cream and the milk cans on to go to Wichita, and that’s how it went to market.”

It was these lessons in efficiency and a love of foraging — gleaning her ingredients from nature — that led Mary to add dandelion wine-making to her seasonal culinary pursuits and, later, to experiment with wild fruit wines.

“I ask myself why I like to do this,” Mary says thoughtfully as we finish our glasses, “and part of it’s the gathering — the going out and picking the chokecherries or the elderberries or the crabapples. It’s more than just sitting down and opening a bottle of wine and drinking it. I think I give more away than I keep.”

To make a gallon of dandelion wine you have to start by picking approximately a gallon container full of fresh dandelion blossoms. Put the yellow flowers into a two-gallon or larger open crock and pour 1 gallon boiling water over them. Cover the crock with cheesecloth and then be patient. You have to let sit at room temperature for three full days. Then squeeze the juice from the flowers, keeping the liquid and tossing the squeezed flowers in the trash.

Put the liquid into a large pot and add:

Cover pot and boil mixture for 30 minutes. Cool to lukewarm. Pour into a crock and add 1 1/2 to 2 packages of yeast. Cover with cheesecloth and let it sit for two or three weeks until the bubbling stops. Filter the liquid through cheesecloth and bottle.