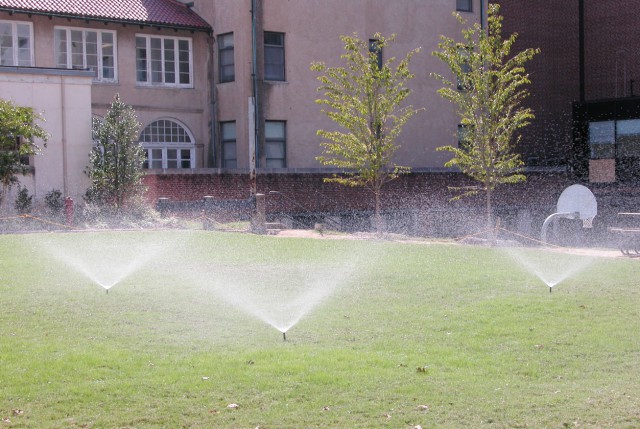 Despite recent storms in the mountains, snowpack around Colorado is still below average, raising the possibility that watering restrictions will force local homeowners and gardeners to pay more attention to irrigating intelligently.

Local experts say it’s a lesson we should heed every year, regardless of whether our mountain reservoirs are full.

The reality, they point out, is that we live in an arid environment, and instead of worrying so much about keeping front lawns green, perhaps we should adopt outdoor watering patterns that are more consistent with the hand that Mother Nature has dealt us locally.

Carol O’Meara, horticulture agent for the Colorado State University Extension in Boulder County, says locals sometimes look at the lush, beautiful gardens and lawns on the covers of national magazines and presume they can create the same thing along the Front Range.

“They need to do a head check and realize they are in an arid climate and should go with xeriscape,” she says.

According to O’Meara, one of the first priorities in saving water is to check irrigation systems, drought or no drought.

“Look at every single sprinkler head and make sure they’re level,” she says, adding that 90 percent of the issues she sees with lawns involve irrigation. “Even a difference of a degree or two can make an impact on the coverage of water.”

O’Meara says people sometimes don’t realize that a sprinkler system is “almost like a living thing” that requires periodic fine-tuning.

And it goes beyond tweaking lawn sprinklers that might have shifted or been damaged over the past six months. She recommends adjusting water times throughout the growing season to match the conditions. Irrigation should start out light in the spring, be highest in the heat of midsummer, and taper off in the fall. In addition, watering systems should be turned off during periods of monsoonal rains.

According to Russ Sands, water conservation program manager for the city of Boulder, residents should also consider waiting a few extra weeks before firing up their sprinklers.

“People don’t realize that their grass can lay dormant and not die,” he says, pointing out that, especially in the case of Kentucky bluegrass, it’s OK to wait until June to start watering.

He and O’Meara agree that watering lawns less frequently but more deeply encourages grass to sink its roots lower, making it more drought-tolerant.

When it comes to gardens, they advise using drip lines instead of sprinklers, to reduce the amount of water that evaporates. O’Meara reminds residents to be mindful of trees as well, adjusting watering patterns as they grow, moving drip lines away from the trunk as they mature (to irrigate feeder roots) and increasing the amount of water dispensed. Otherwise, she says, “it’s like keeping a Great Dane on the diet of a puppy.”

Sands recommends that residents take advantage of the “Garden-in-a-Box” and “Slow the Flow” programs administered by the Center for ReSource Conservation. This year, he says, the city has contracted with the center to go beyond just offering free inspections of irrigation systems and to start performing minor on-the-spot repairs at no charge. Instead of just giving residents a list of recommended improvements, Sands says, technicians might be able to go ahead and replace that sprinkler head at the time of their visit.

One can have the best xeriscape garden in the county, he says, but a leak in the irrigation system can nullify the positive effects of using native plants that don’t need much water.

O’Meara notes that irrigating with exactitude and efficiency has positive side effects, like reducing the incidence of weeds, since “weeds like stressed areas.”

When it comes to gardens, she says residents should give careful consideration to how much water their plants are going to need, and “what you want out of a garden that is responsible.” Everybody loves vegetable gardens, she explains, but they use a lot of water.

Even when plowing forward with plans for a veggie garden, O’Meara says residents should consider the different amount of water each vegetable will require.

“Tomatoes don’t need as much water as people think, but corn likes a lot,” she says.

O’Meara recommends applying mulch to retain moisture in the soil — but not too early. She suggests waiting until the end of May or early June, so that soil temperatures have risen enough.

When asked about the likelihood of watering restrictions, Sands was noncommittal, since precipitation in the coming weeks and months can always change things.

“It’s too early to tell, because April is among our snowiest months,” he says, adding that even localized rainfall in the summer can change the approach taken by any given city.

Additional tips for smart watering this spring and summer are available on the CSU Extension’s website, www.extension.colostate.edu/boulder.

In addition, O’Meara says, www.plantselect.org has compiled an excellent guide to plants that are appropriate for the West, and www.alcc.com features a gallery of award-winning designs for low-water gardens.

“We’ve got to think in terms of living with our environment instead of working against it,” she says.