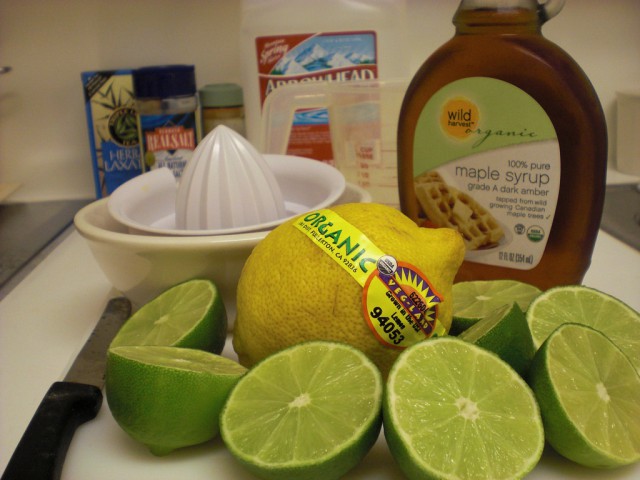 At the start of spring, I tried a seven-day cleansing and detoxifying supplement program. I was feeling tired, stressed out and low-energy — conditions that seem to come with the territory of being over 30 years old. The kit I purchased contained a three-part system that would supposedly clean the toxins from my liver, purge my kidneys and load me up with fiber.

According to the instructions, I was told I needed to eat only vegetables for the first two days, then add in fruits, then eventually healthy lean meats and beans. As any good scientist knows, changing multiple variables in an experiment can lead to vague conclusions — how could I know if it was the cleanse supplements or the improved eating that was working its magic?

I went ahead with the plan — which included cutting caffeine — and spent two miserable days hungry, irritable and well acquainted with the bathroom. Three or four days in, I began to feel markedly better and by the end of the seven days I indeed had more energy, a bit more focus and had even lost a few pounds. The problem was, I didn’t know what exactly did the trick.

NBC News reports that natural and alternative supplements and medicines are a $40 billion per year business. And any industry that big is bound to have a twisted way of marketing its product. It was time to do some nitty-gritty research and find out what science has to say about the physiological benefits of both alternative supplements and simply eating a healthier diet. I figured I’d start with the headiest source I could — the Mayo Clinic.

“Detox, or detoxification, diets are popular, but they’re not scientifically proven,” says Katherine Zeratsky, a registered and licensed dietician at the Mayo Clinic.

Detox diets are touted as a way to remove toxins from the body. Specific detox diets vary, but typically a period of fasting is followed by a strict diet of raw vegetables, fruit and fruit juices, and water. In addition, some detox diets advocate using herbs and other supplements along with colon cleansing (enemas) to empty the intestines.

Some people report feeling more focused and energetic during and after detox diets. However, there’s little evidence that detox diets actually remove toxins from the body. Indeed, the kidneys and liver effectively filter and eliminate most ingested toxins. The benefits from a detox diet may actually come from avoiding highly processed foods that have solid fats and added sugar.

The more research I did, it became apparent that ingredients supposedly designed to “detoxify” the kidney and liver (such as milk thistle and various organic laxatives) have no scientific evidence of actually purifying anything. A wealth of studies published on the National Center for Biotechnology Information website enforce the notion that detoxification of the liver and kidneys simply doesn’t happen from these products. When functioning properly, both of these organs are incredibly effective at cleaning waste from the body. Laxatives can help clean up constipated bowels, but as far as detoxifying the entire body, there’s little evidence to back it up.

It became clear that it isn’t about what comes out of the body but about what goes in. Because the human body is marvelously efficient at discarding wastes doesn’t mean it’s exempt from penalties for poor diets. Hormone levels of insulin, red blood cell production and many other processes go into proper nutrition and digestion. The more “filler” foods and processed sugars find their way into our systems, the harder the body has to work to extract the good and eliminate the bad, which is why so many people feel so lethargic when eating poorly.

Many folks herald the wondrous benefits of juicing, though Jennifer K. Nelson, also a registered and licensed dietician at the Mayo Clinic, notes, “Juicing probably is not any healthier than eating whole fruits and vegetables. Juicing extracts the juice from fresh fruits or vegetables. The resulting liquid contains most of the vitamins, minerals and plant chemicals (phytonutrients) found in the whole fruit. However, whole fruits and vegetables also have healthy fiber, which is lost during most juicing.”

“Some juicing proponents say that juicing is better for you than is eating whole fruits and vegetables because your body can absorb the nutrients better and it gives your digestive system a rest from working on fiber,” says Nelson. “They say that juicing can reduce your risk of cancer, boost your immune system, help you remove toxins from your body, aid digestion and help you lose weight. However, there’s no sound scientific evidence that extracted juices are healthier than the juice you get by eating the fruit or vegetable itself.”

It seems the bottom line is that the idea of a “cleanse” is somewhat misleading. It is at the start of the process — not the end — where the most important changes are made. By shifting to a healthier, balanced diet, the body will slowly but surely adapt, which will present noticeable increases in energy and focus, promote better sleep and generally make you feel a lot better. However, depending on how far you are from an ideal diet, these changes can take a frustratingly long time — expect anywhere from five days to several months to feel the full effects of a move to a healthier diet.

More recently, I made a commitment to try the week-long cleanse without the cleanse supplements — two days of eating raw veggies, slowly adding in fruits then finally eliminating unhealthy foods. And wouldn’t you know it, I felt the same positive changes.

Cleanses may not be all they are cracked up to be — much like fad diets — but the science that accompanies most cleanse programs proves that eating healthy and simple foods are the surest ways to ultimately feeling better.