Breathe life into your yard and conserve natural resources by planting native species. These hardy plants are adapted to our Colorado soils and climate, so they often use less water and fertilizer. They also provide essential wildlife and pollinator habitat. Local bees love them — and your whole garden will thank you for that. We spoke with Boulder horticulturalist Deryn Davidson about how to get started with native plants.

“The benefits [of native plants] are many,” says Davidson, who is a Colorado State University horticulture extension agent in the County. “Potentially, you’ll use fewer resources. You generally don’t have to amend soil as much. You’re not going to need to use as much, if any, fertilizer. Water, of course, is generally less.”

What are native plants?

Most basically, native plants are ones that grow naturally in a given region. They can be trees, shrubs, perennials, grasses and other vegetation. We have many different species native to Colorado, and more specifically the Front Range. (See “Getting started” for specifics.)

“[Native plants] can survive with our cyclical drought periods and periods of heavier precipitation,” Davidson says. “They’re adapted to our climate and our soils and that’s why they tend to do really well and thrive here.”

Native pollinators and native plants evolved together so they have a long-standing symbiotic relationship. Pollination is that biological dance in which animals travel from one flower to the next, trailing pollen on their bodies and completing a vital life cycle in plants. Honeybees first come to mind when we think of pollination, but they’re actually not native to Colorado.

It’s hard to believe, but we have 900 species of native bees in Colorado. In addition to bees, native pollinators include butterflies, wasps, birds and other animals.

So how and why would we want to encourage native pollinators?

Native pollinators are more attracted to native plants, according to one study in California, so planting more native plants could encourage local pollen lovers.

“Generally speaking, on an ecosystem level, it’s beneficial because we’re going to have more robust biodiversity if we can support what is found here naturally,” says Davidson.

Here in Boulder County, our communities could face the issue of the urban heat island effect — something important to consider with rising temperatures and climate change. Heat islands often happen in cities made of concrete and asphalt, which tend to absorb and retain more heat than the open space around them. One strategy to combat the urban heat island effect is to plant more vegetation in cities. More vegetation might help with storm runoff by helping water seep into the ground rather than flowing off sidewalks and streets into storm drains, Davidson says.

Temperature also affects plants and determines how hardy they might be in an environment, says Davidson. The Front Range is known for drastic seasonal swings in temperature, and significant day-to-night changes. This can make it a
challenging environment for non-native plants. Rising temperatures due to climate change also affect the range of where plants, insects and other animals can live, producing an ecosystem-wide ripple effect.

Davidson adds that although native plants might not necessarily be superior to other species, they have other benefits that might tip the scales in their favor when considering which plants to choose for your garden.

Planting a native perennial can be a good way to get started in your own yard. “They flower and bloom and bring a nice pop of color to your garden,” she adds. Pay attention not to water too much or make the soil too rich. Sometimes, native plants are harder to find at nurseries, so Davidson recommends a few that are usually available locally.

Chocolate Daisy (scientific name Berlandiera lyrata) is a native perennial with a beautiful bright yellow color that blooms all summer long. It’s super tough, doesn’t need much water once established, and is usually readily available at nurseries. It also smells like chocolate!

Golden Currant (scientific name Ribes aureum) blooms bright yellow in the spring and grows fruit. It’s good for pollinators, particularly as you think about flowers during the early, springtime season. It has a clove scent.

Bigtooth Maple (scientific name Acer grandidentatum) is a good native alternative for people who love maple trees and their gorgeous fall color. The bigtooth maple has adapted to our soils, whereas other exotic maple trees need more iron and are more susceptible to disease. 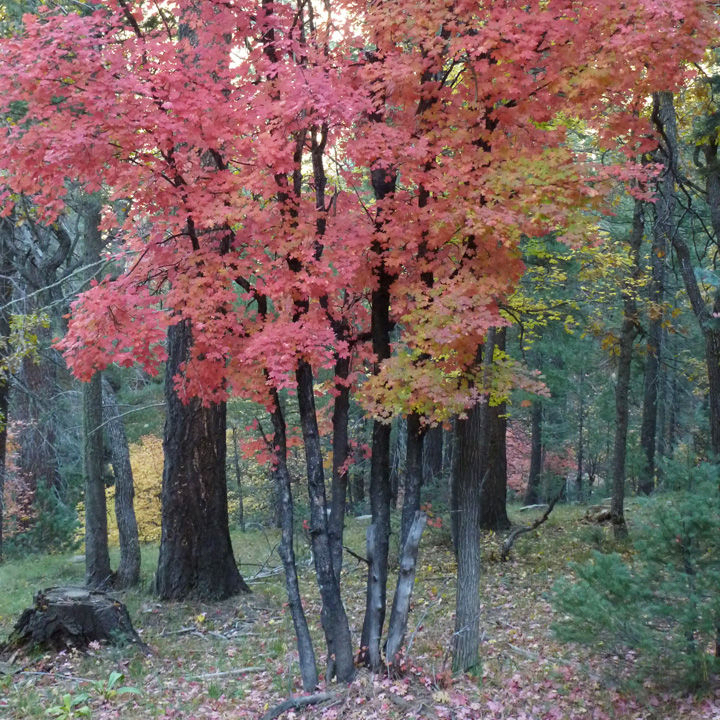