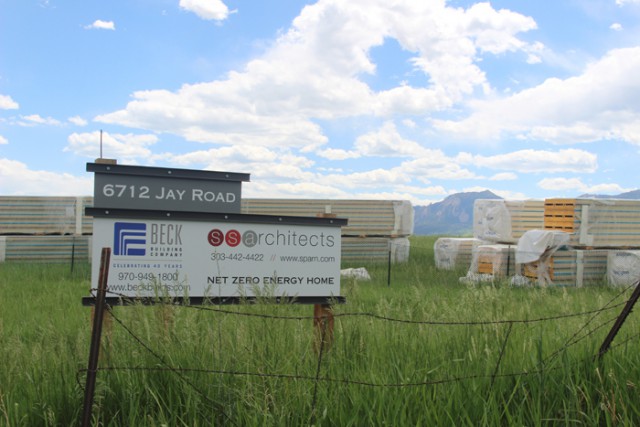 Boulder County’s most energy efficient home sits at 6712 Jay Road. The residence, to be completed within a year, is expected to produce 29 percent more energy than it consumes using a combination of solar, wind and geothermal systems.

The owners of the home set out to build a “demonstration project,” to show what is possible in terms of net-zero energy building in Boulder County, according to Kevin O’Donnell, president of Beck Building.

Sparn Architects and Beck Building worked together on the Jay Road house to design the most efficient house possible. This project includes south-facing windows to let in light during the winter, glass that is engineered to tint itself in the summer to limit light coming in, and a smart lighting system that shuts itself off when not in use. The owners of the property are also considering using the land for sustainable agriculture, according to O’Donnell.

“What was really great about being able to work on this project is that our client is incredibly interested in pursuing all of these avenues and having them,” O’Donnell says.

According to O’Donnell, the project, a sprawling and architecturally austere home in a semi-rural corner of Boulder County, achieved an expected energy rating of “plus-49” before even considering the addition of renewable energy sources. This means the home is 51 percent more energy efficient than homes built to 2006 energy codes.

“We tend to first design a highly energy efficient home or high performance building, a building that minimizes heat loss and heat gain,” says Stephen Sparn of the architecture firm behind the project. “By starting with that, you’re reducing your energy pie really small.”

But even if the home is highly efficient and capable of producing more energy than it consumes, it is still ultimately dependent on the grid.

“It will draw energy if necessary.

The problem with the alternative sources of energy is they’re not tied to any storage system unless you actually design it, so we can feed energy back into the grid and draw back from the grid when we need it. We are essentially running the electric meter backwards,” says Sparn.

Boulder County considers reductions of the amount of energy used essential in terms of reducing greenhouse gas emissions. When Boulder County began working towards reducing emissions in compliance with the Kyoto Protocol in 2005, inefficiency in existing buildings revealed itself as the worst offender in terms of energy consumption.

“As we looked at that, it became clear that if you were serious about needing to reduce emissions, you both needed to figure out how you could get improvements to existing buildings and you needed to make sure as new construction took place, that you were building new buildings that were far greener, far more energy efficient and made greater use of renewable energy, and that’s really where the conversation around Build Smart came from,” says Will Toor, former mayor of Boulder and a former Boulder County commissioner, who worked on the Jay Road project.

Build Smart is now Boulder County’s building code. Adopted into Boulder County building codes in 2008 by County Commissioner Cindy Domenico and then-county commissioners Ben Pearlman and Toor, Build Smart aims to reduce emissions both produced by residences themselves as well as the amount of materials sent to landfills, conservation of water and other resources during construction, and insurance of proper air quality in the residence.

“We had our staff and consultants take a look at how far could we push energy performance in new construction such that the incremental cost of the construction, if wrapped into a typical mortgage, the incremental increase would be equal to expected decrease in utility bills. And that’s how we set the based standard for all homes. …We then built in the requirement that as homes got larger, because they would be using more energy, they would have to get more efficient,” says Toor.

Currently, any new homes of 6,000 square feet or more must achieve an energy rating of zero or less, that is, they must be capable of achieving net-zero energy use.

Every three years building codes are reconsidered and improved. In 2012, Boulder County set the intention to continue intensifying efficiency requirements such that by 2022 all new homes in Boulder County will be required to achieve a minimum of net-zero energy consumption.

Build Smart is among the most aggressive building codes in the country in terms of energy efficiency, according to Boulder County Land Use Sustainability Examiner Ron Flax.

A crucial factor in the development of the green building industry in Boulder and along the Front Range has been the Colorado Green Building Guild. The guild was founded in 2004 when a group of industry professionals decided to take it upon themselves to create more stringent efficiency requirements than what was then required by the City of Boulder’s Green Points Program.

“Everyone was able to come together and start talking about these conversations, how do we build better? … It’s a systems process and a systems approach and it’s got to be integrated. And so the guild allowed for these conversations to start happening, allowed for education where professionals were sharing with other professionals,” says Flax. “If you took Build Smart and just dropped it on a new community, they wouldn’t be able to succeed because contractors don’t know how to build like that, material suppliers don’t understand materials choices, how they differ, they don’t have energy raters and design professionals. And the realtors need to be able to understand what people are buying.”

Flax points out that there are many building materials, particularly foams used for insulation, that are marketed as sustainable building materials because they conserve energy in homes, even if their manufacture is extremely energy-intensive. Commitment to knowledge in the private sector is therefore quite important to building truly lowimpact homes.

“Thinking historically, at the time we adopted Build Smart there was a fair amount of controversy over it. We heard a fair amount of the doom and gloom that this would be impossible for builders to comply with. And none of that happened,” says Toor. “Instead what we saw is the people in the construction business are smart and adaptable and they figured out how to comply with the rules pretty quickly and in fact what we found out was many builders were going beyond the requirements.”