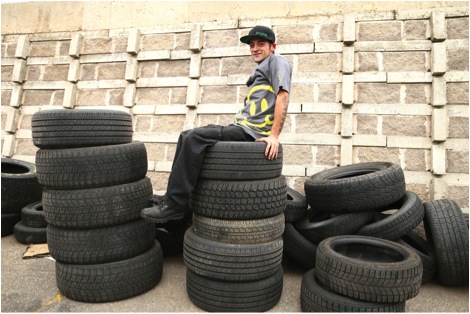 Northeast of Denver in the small town of Hudson lies the largest tire dump in the U.S., known by many as Tire Mountain. Immediately south of Colorado Springs sits the nation’s second largest tire dump. Combined, the Rubber Manufacturing Association says, Colorado’s tire dumps, known as monofills, accounted for 40 percent of the nation’s waste tires in 2011 — an estimated 60 million tires.

While Colorado’s heaps of scrap tires have been seen as fire hazards and breeding grounds for vermin and virus-spreading mosquitoes, they may also be a valuable source of reusable material and business potential. A new state bill aims to clean up and close Colorado’s tire dumps and develop high-value markets for waste tires.

Colorado’s House Bill 1352, which was signed into law on June 6, requires waste tire monofills to stop taking tires by Jan. 1, 2018 and to completely clean up and close by Jan. 1, 2024. Until then, tire dumps are only allowed to take in one new tire for every two recycled. The bill provides oversight and management for the waste tire process from point of waste to end-use, when tires are transformed into commercial or industrial products. This requires Colorado’s monofills to speed up their recycling process by either contracting with local recyclers or doing it themselves.

The bill enjoyed bipartisan sponsorship across the House and Senate. State Sen. Nancy Todd (D- Arapahoe), who heads the Transportation Committee, was one of the co-sponsors of the legislation.

“I think finally people said, ‘Instead of us just piling them up, let’s figure out ways to be more productive,’” Todd says. “We’re hoping that this might be the final waste tire bill that we need to run.“ But not everyone agrees that the bill will be effective, since this isn’t the first time Colorado has tried to use legislation to clean up its tire problem.

“Back in 2009, HB 289 required that the monofills be emptied by 2019. I think the new legislation is going to be viewed and handled just like the old. I don’t think it’s feasible,” says Lonnie Houtchens, president and owner of American Tire Exchange. “Ownership will be shuffled, people will be given more time and exceptions. That’s what has been happening since 1992 [or] 1994. No matter what the law says — either state or local — the monofills rarely adhere to it and are given extensions.”

The new legislation requires that waste tires be reused in a way that is not harmful to human health or the environment. Some beneficial uses include mixing them with asphalt pavement or chopping them into mulch for gardens or playgrounds. They can be recycled as an aggregate in concrete or processed for devulcanization, which separates the chemical bonds within the tire and restores it back to its original rubber state.

“Either grind them up and reuse them into feed stock or shred them, crumble them or use them for abates for carpeting; you know, the padding of the carpeting,” says Todd. “Use them for asphalt or for playgrounds — actually use them instead of letting them just pile up.”

“The new legislation will be promoting some new products of ours like crum rubber,” says Rick Welle, president and owner of Front Range Tire Recycle. “It will be slowing down some of the old markets we had for tires — in a whole it is a fairly good bill. To decrease and stop the monofills from growing is a very good thing for the recycling industry.”

CH2E, the company that owns Tire Mountain, plans to melt tires to produce diesel fuel and a type of steel.

Magnum d’Or, which previously owned Tire Mountain, created a stir among lawmakers when owner Joseph Glusic was investigated by the Securities and Exchange Commission for using state tire recycling subsides to participate in unlawful stock activities.

“The monofills have new owners showing much more promise — responsible owners that have new innovative business plans on the books,” says Charles Johnson, program manager with the Solid Waste and Materials Program with the Colorado Department of Public Health and Environment. “We met privately with these folks. Should their plans come to fruition, they will be using almost double the amount of waste tires on an annual basis. That has two really strong impacts. It will continue to help utilize all the new, generated waste tires, and it will help utilize waste tires that are being stored in a giant warehouse. The change of ownership from Magnum to CH2E has brought on new business partners into that facility and yes, they actually will have great opportunities to recycle significantly more tires.”

A prevailing theory is that more tires are wasted than recycled. This leads to the perception that if the monofills close, recycling centers and illegal dumping sites will be overloaded with waste tires.

However, according to Johnson, “two years ago we used more waste tires than we generated new ones.”

There are many recycling centers around the Front Range aching for an increase in waste tires to recycle.

“We’re running out of tires for the recycling process because we’re doing so well recycling, so we welcome the influx of the legally generated tires coming to us to be recycled instead of going to the monofills to just be stockpiled,” says Welle with Front Range Tire Recycler.

Teresa Immel from Colorado Tire Recycling in Denver hired a lobbyist to support her interests in the bill.

“Everyone knew this bill was coming up, so the state started holding stakeholder meetings last summer,” Immel says. “And while it wasn’t everything for everyone — it never is — I think, as a group, there was a lot of give and take. Whenever there’s money involved you really see what people support. The legislators tried to do this bill justice and I believe this was a good outcome of a lot of good things.”

Besides attempting to implement streamlined recycling legislation, there are other measures of HB 1352.

Starting Jan. 1, 2018, state tire tax at point of purchase will drop from $1.55 to $0.55 and the state will distribute the revenue of the lowered tax to three new funds. The funds focus on compensating the end user, encouraging market development and providing money to the newly created Waste Tire Administration and Enforcement Cleanup Fund.

The WTAECF will inspect tire retailers to make sure the fee is being collected and will support the hiring of a contractor to clean up illegal waste tire dumps according to the provisions in the bill.

“There’s illegal tire dumps all over the state. Some of the illegal dumps are usually farm land or some are over in the mountains where no one would see them,” Immel says.

The new legislation provides funding for cleanup of illegal tire dumps along with funding to train personnel to utilize better waste tire management techniques that are more suitable to the health of the environment and people.

Both Johnson and Immel say they believe HB 1352 is a great first step to reducing Colorado’s tire stockpiles in an environmentally friendly way and creating a sustainable free market of tire recycling.

“We have seen other states dumping — we’ve become kind of a dumping ground in Colorado,” Todd says. “So, I think people are saying, ‘We need to put a stop to that and we need to figure out a better use and how we can address those issues.’ We don’t need to be using our beautiful land to just fill it with trash.”