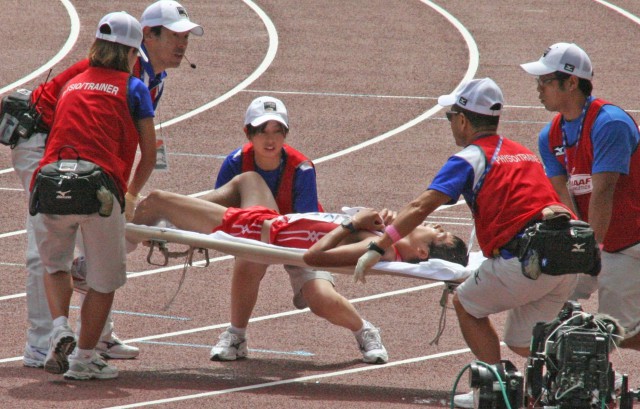 A few years back, I broke my left thumb during an ultimate Frisbee game. Four days later, I broke my right thumb playing volleyball. Ever try turning a key in a lock without your thumbs? I genuinely felt less evolved with my opposable digits temporarily out of service.

Many people identify strongly with their favorite sports. Because of that passion — or obsession — we get used to playing hurt. It’s not unusual to see people scaling the walls at the climbing gym with a soft cast on their leg or watching runners zip around trails with their arm in a sling.

It is difficult for driven athletes to let a little pain get in the way of a good time. Dr. Sonya Black of Rocky Mountain Family Medicine in Denver is all too familiar with athletes who try to come back from injuries too quickly.

“Almost any athletic person will return to their activity too soon. It’s part of their makeup,” says Black. “They don’t feel themselves if they aren’t able to do the exercise and activities that they love. I give the same speech to everyone: It’s so much better to miss a few weeks of activity letting an injury heal properly the first time rather than pushing it and dragging it out for months or years.”

Somewhat ironically, she adds, “After eight knee surgeries, I’m a prime example of someone that didn’t take that advice. The most important person besides the patient when it comes to an injury recovery is the physical therapist. They teach people how to recover from this injury and how to strengthen their body to avoid the same injury in the future.”

Most of us, upon being told to rest six to eight weeks, will translate that into “six weeks of rest” and possibly even, “Six weeks is about a month, I’ll give it 30 days.” Many injuries will feel much better before they are fully healed, leading to errors in judgment.

“Another mistake athletes commonly make is not asking detailed questions about recovery,” says Black. “The ortho[pedic doctor] may have thought they were clear about the plan, but often patients have no idea when they can stop using their crutches, or when to do range of motion exercises at home, or when to walk or run again. It’s also important to ask and have a follow up plan for a setback with the injury. Often people don’t know what to do if they were cleared by their doctor or therapist to return to activity, but then the pain returns.”

Since most of us are bad patients, I asked Black what are the most important things to remember when dealing with an injury. Here’s her advice:

“I tell patients that you have to take care of the whole body, not just the injury. Without proper sleep, the body can’t heal. Let pain be part of the measure of how fast to move back into activity. If it hurts, don’t do it. Most injuries that occur to the knee, ankle, back, et cetera, need a period of lessened impact or stress, but still need movement. We no longer tell back pain patients to stay still; movement loosens the muscles and actually decreases the pain. If you tell an active person to be stagnant because they are recovering from an injury, the rest of their body, but more importantly their mental health, suffers. It’s always best to modify or find another activity to keep active people moving and feeling strong.”

Which brings up the other component of healing: the mental side.

With proper rest, physical damage will heal itself but the emotional toll on injured athletes may be more troubling than the injury itself. Dr. Julie Emmerman, a clinical sport psychotherapist, reminds athletes that the mental aspect of healing is just as important.

“It is easier for people to feel legitimate about the physical pain they’re enduring whereas expressing emotional pain often leaves one feeling vulnerable to judgment,” says Emmerman. “In addition, our culture has for many years been accepting and compassionate regarding physical pain. We see the injuries; we can relate on some level or imagine what it might feel like. Attention to emotional struggles that often coincide with severe physical injury has only gained wider attention and interest from the public in the last roughly 15 years. Therefore, many individuals don’t even realize they are neglecting their psychological care until later.”

In order to get into the proper state of mind to heal, Emmerman suggests confronting the reality of the injury and finding empowering ways to work through it.

“It is important to feel the losses incurred: the anger, disappointment, shock, disbelief and sadness at and eventual acceptance of what is,” explains Emmerman. “Depending on an individual’s personal history, circumstances and severity of injury, this will take variable amounts of time, and patience is required by not just the athlete but their supports. I encourage athletes to learn as much as they can about what led to the injury — lack of focus, dehydration, mechanical issue, another athlete — and develop constructive take-aways with the aim of applying those lessons forward when the athlete is back to full functioning.”

The final phase of healing for most athletes is playing the sports they love at their previous levels. This can be the most difficult part of the healing process for many.

“The biggest mistake I see people make is minimizing their experience and being their own worst critic,” says Emmerman. “[They think,] ‘Oh man, I used to do this so easily.’ There is a time and place for easing back into technical cornering on a bike, for example, and there is a time and place to ‘just do it.’ If there is anxiety about returning to the sport, it needs to be addressed properly lest that person is willing to surrender his/her athletic passion. It is important to take a deliberate, time sensitive approach that emphasizes safety, learning/re-learning skills, and works with (not against) the person’s level of fear.”

Ultimately, it takes awareness of both the physical and mental states to properly come back from a sports injury. It will take patience, but those aiming to heal the “right way” will be able to redirect those frustrations and make them part of the healing process. No competitive person likes being on the sidelines. Taking a smart approach to the entire healing process is key in returning efficiently and without lasting damage to the sports you love.