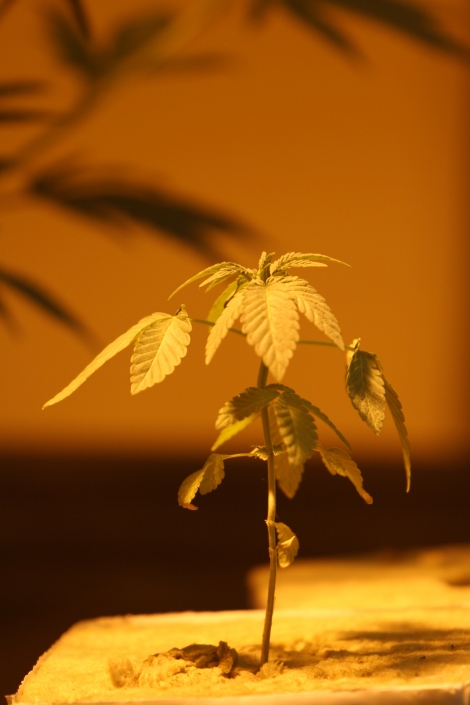 Indoor marijuana grow operations aren’t as green as the weed they produce. According to data from Xcel Energy and estimates from those familiar with indoor growing, a single light used to grow 16 square feet of pot consumes about half as much energy as the average Colorado house in a one-month time frame.

A 2011 scientific study by California researcher Evan Mills reached a similar conclusion on a nationwide scale. Mills, who works as a scientist at the Lawrence Berkeley National Laboratory but performed the pot study independently, found that a single 4-foot-by-4-foot “module” — not just lighting but ventilation, air conditioning and all other electricity uses — consumes as much electricity as an average U.S. home.

Mills writes in his study, published in April 2012 in Energy Policy, “indoor cannabis production results in energy expenditures of $6 billion each year — six times that of the entire U.S. pharmaceutical industry — with electricity use equivalent to that of 2 million average U.S. homes.”

He says the most powerful and most commonly used bulb is one kilowatt (kW), or 1,000 watts. While Ellis tries to avoid speaking specifically about marijuana growing, he says a one-kW bulb for 12 hours a day is standard for growing most things indoors. Other sources confirmed that’s the usual amount of time to give light to marijuana plants indoors.

But how many lights are in use in a warehouse marijuana growing operation? Ron Richardson of Victory Hydro Gardening, which also sells lights, hoods and other growing equipment, estimates an average Boulder warehouse runs 50 lights. He says 100 in Boulder would be a medium-to-large operation and would be “considered small” in Denver.

So, if two lights equal one Colorado house, an average Boulder County marijuana warehouse uses the energy of 25 Colorado homes on its lights alone.

As for residential growing operations, not much is known. But in one arrest in 2011 in California, police found that a growing operation inside a house was using 4,676 kWh of power in a month — more than seven times Xcel’s Colorado average.

By the way, home growers: Stutz points out that Xcel doesn’t share residential power usage with law enforcement without “some legal documentation for the need for the information.” That myth about Xcel catching you using tons of energy and telling the feds is just that — a myth.

But growing marijuana requires more than just lights. Ellis says the lights are “probably the most predictable thing, since those are running for set amounts of time.”

“Absolutely, the lights would be the biggest cost,” Ellis says. “From there, a fan isn’t pulling near a thousand watts. It’s maybe pulling 50 to 100 watts on a fan. Air conditioners might be up there, if you’re running several lights and you can’t use the outside air to cool your room.”

A single air conditioning unit can use as much energy as a light bulb, but can have less impact if air can be circulated in other ways.

“Air conditioning might be in the range of 1,000 to 1,500 watts,” he says. “So it’s not uncommon for an air conditioner to be drawing as much as a light, but those aren’t as frequently used except for planning a professional system.”

Mills’ study says 33 percent of the carbon footprint of indoor-grown marijuana is the lighting, with ventilation and dehumidifying equipment accounting for 27 percent, air conditioning 19 percent and vehicles 12 percent.

The energy use of indoor growing “corresponds to 1 percent of national electricity consumption or 2 percent of that in households,” Mills writes. “The yearly greenhouse-gas pollution (carbon dioxide, CO2) from the electricity plus associated transportation fuels equals that of 3 million cars.”

The study also tackles solutions, though Mills says it’s not as simple as legalizing the drug. Pot’s criminal status has led to “energy inefficiencies in the process,” he writes, as some growers keep their plants inside to hide from cops and use “noise and odor suppression measures that undercut ventilation efficiencies.” He also notes that off-grid generators that run on diesel or conventional fuel can be extremely inefficient.

The study suggests that growing marijuana outside can drastically cut or even eliminate the plant’s huge imprint on the energy grid. Unfortunately, as he notes, marijuana is grown indoors for year-round yields, higher potency and greater control, not just to hide the plant from law enforcement.