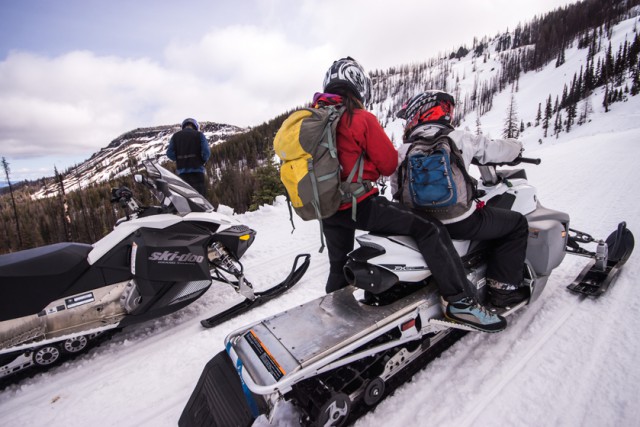 A blur of fire-blackened trees line the trail through the snow-covered Table Mountain burn zone in the Okanogan-Wenatchee National Forest. With every uphill turn of the snowmobiles, the wind whips harder, temperatures slipping. Fat snowflakes swirl from gray skies. Even through masked helmets and thermal layers, the cold early-April air seeps in.

The duo of snowmobiles has climbed to over 6,000 feet elevation, halfway to the study site where researcher Susan Kaspari and her small team will dig into six feet of snow and sample for soot, more accurately known as black carbon. There’s evidence suggesting black carbon from increased wildfire activity is affecting snowpack and melting here in the eastern Cascades — much like dust on snow is affecting Colorado. Kaspari is digging her way to answers on just how extensive those effects may be — for the ecosystem and for the people who depend on the snow for water.

Dan Pittinger, Kaspari’s graduate assistant, pulls up alongside Kaspari and her colleague, paleoecologist Megan Walsh. They’ve stopped to check out dark patches in the snow among the blackened trees.

“I just want to get a quick look,” Kaspari says, springing from the rear of the snowmobile and pulling a small shovel from the bundle strapped to the back. “This dark layer at the top is really interesting.”

She gets on her knees to inspect the grayish snow and begins digging a hole.

Pittenger takes over and the pit is soon a few feet deep. The site isn’t ideal — it’s too close to the trail, for starters — but Kaspari only has funding to sample a handful of sites in Table Mountain a few times a year, and doesn’t miss a chance for impromptu sleuthing on the way to the actual research site. “This is considerably darker, what we’re seeing right here at the surface,” Kaspari says, once the pit is deep enough to show weeks of past snowfall. It’s hard to say why with a cursory dig: “This is either from there not being a lot of snow and a whole bunch of black carbon accumulating, or we’re seeing stuff that started to melt and consolidate at the upper surface.” She emphasizes, not for the first or last time: There’s still so much we don’t know.

She’s been studying climate history through snow and ice since her college days, drilling cores from the Tibetan Plateau to the Himalayas to the Swiss Alps. A 2004 NPR interview with climatologist and global warming maverick James Hansen inspired her to focus on the black carbon in her samples — both the thermogenic kind, from fossil-fuel burning, and the biogenic kind, from biomass burning, like wildfire. Wildfire has become more of a concern across the West, from her Colorado birthplace to her home in Washington, prompting her to examine the implications of black carbon on ice and snow here in the Northwest, where few have done so before.

Only a handful of scientists study black carbon on snow at mid-latitudes, in part because funding for this sort of work outside the Arctic and Antarctic is scarce. And on a global scale, black carbon — the partially combusted, light-absorbing particulate matter that spews from smokestacks, vehicles, agricultural burns and wildfires — is still among the least understood factors of climate change. A 2013 study called it “the second-most important individual climate-warming agent after carbon dioxide,” estimating it may contribute more than twice as much to global warming than previously thought, with about two-thirds the warming effect of carbon dioxide. Black carbon stays in the atmosphere for a far shorter time — about one to three weeks — than CO2, which can remain there for 100 years or more. Yet particle for particle, black carbon can trap a million times more heat while it’s airborne.

Once it lands on the ground — on ice and snow, in particular — the nuances are even less understood. But the implications are troubling: Black carbon drastically reduces the albedo, or reflectivity, of ice and snow, because a darkened surface absorbs more sunlight and melts more. And as dark melt-water spreads across whiter snow and ice, the effects spiral: Less sunlight is reflected away, more light is absorbed, and surface melting can accelerate in a runaway cycle of melting and warming.

Scientists in places like Svalbard, halfway between Greenland and the North Pole, say black carbon is contributing to major climate signals like earlier seasonal melting and thinning Arctic sea ice. Melting land ice is another climate signal linked to black carbon, as studied by Jason Box’s Dark Snow Project in Greenland. Box’s research suggests that black carbon on the surface was to blame for one unprecedented summer day in 2012, when the entire ice sheet was melting simultaneously. In both places, increased wildfire activity is suspected as having an outsized influence, with soot from massive wildfires as far away as Canada reaching Greenland, and multimillion-acre Siberian wildfire soot reaching Svalbard.

Kaspari is looking at soot on snow from wildfires closer at hand. And unlike Svalbard and Greenland, this snowpack serves as a reservoir, providing nearly half the yearly water demand in Washington’s Yakima River Basin. It’s one of the most intensively irrigated agricultural areas in the U.S. and home to more than 300,000 people.

In September 2012, the Table Mountain wildfire burned 43,312 acres of lodgepole pine and Douglas fir forests between the towns of Cle Elum and Ellensburg, where Kaspari and Walsh teach at Central Washington University. The smoke smothered their town for a week, keeping Kaspari indoors but providing an ideal post-fire study opportunity. Her initial data suggests a strong correlation between black carbon, deposited by the fire, and an otherwise unaccountably high rate of melting.

In the forests around her Table Mountain study site, fire in various forms is a natural part of the ecosystem, yet studies show that as Washington’s spring snowpack is declining, wildfires are increasing in frequency, size, intensity and duration. It’s still unclear the extent to which snowpack is affecting wildfire, and how black carbon may in turn be exacerbating the declining snowpack. Her work is seeking answers.

It’s another hour through snow and charred trees on the snowmobile, then a snowshoe through dense forest before reaching the study site. Pittenger begins digging, and when he hits bottom, standing six feet tall, his head barely pokes out from the pit. He climbs out and Kaspari drops down in his place. She props a measuring stick against the wall of the pit where she’ll sample. Pittenger starts taking notes while she talks. Walsh opens a bag of vials and Whirl-Pak baggies, and hands down plastic gloves, a glass scraper and a few of the vials. Kaspari smooths the surface where she’ll be sampling from the bottom up, with each vial of snow representing a set period, covering the entire snow year.

“She does snow and I do mud, but it’s the same concept,” Walsh says. “The new stuff’s on top, the old stuff’s on the bottom, and it’s a time series as you move down.” Walsh’s expertise is reconstructing long-term regional fire history and forest structure by measuring charcoal and pollen in lake sediment cores, but no one has done that kind of work around Table Mountain. She hopes to complement Kaspari’s work with a fire history study of this area. Meanwhile, the latest National Climate Assessment predicts that across the Northwest region, water availability will be reduced and wildfires will continue to increase.

“There’s some visible black in here,” Kaspari calls, handing Walsh the first vial of snow. She tells Dan to mark this as a melt layer with visible charcoal. Later, she’ll carve a brickshaped chunk from this layer and seal it in a Whirl-Pak for more detailed analysis. Snowflakes are beginning to cover the pile of baggies and vials. Pittenger, immune to the deepening cold, fills the page with notes with ungloved hands as Kaspari scoops snow into vials and calls out observations.

“Just collecting snow — that’s the easy part,” Kaspari says. “I just take it home and stick it in my freezer, and then bring it into school.” That’s not the case with her ice cores, like the South Cascade Glacier core which took months of planning, tens of thousands of dollars, several mules and one helicopter to drill and transport the core in its frozen state, and which Pittenger has been processing for the bulk of his graduate research.

He’ll spend hours running these new snow samples through instruments that precisely analyze black carbon and minimize interference from other impurities like dust. There’ll be lots to study back in the lab: various forms of visible black carbon, suspected melt layers, snow crystals of all sizes and chunks of “caddywhompus” — Kaspari’s playful term for the less-readily identified impurities. She’ll try to tease out nuances, such as how the size of black carbon particles affects albedo, and researching anecdotal evidence like snowfall reports, wind direction and wildfire records for the region. If her next round of proposals is funded, she’ll drastically scale up her snow research. She’ll know by next winter.