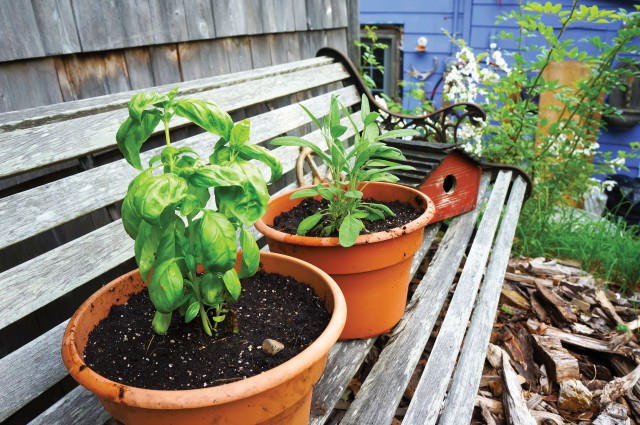 As summer turns into fall so will fall turn into winter — we pull the sweaters and coats toward the front of the closet and stow away the bathing suits, shorts and tank tops.

But you may find yourself looking at the planting containers on your front porch or patio, once brimming with colorful flowers and vegetables, now filled with lifeless vegetation, and think, what do I do with these?

Gardening can get expensive, so take some advice from a few expert gardeners and recondition, store and reuse that soil for next season.

In places where winters can get harsh — and there will be at least a couple of harsh winter weeks here on the Front Range — soil will expand and contract, so a mindful gardener will want to empty plastic, ceramic or clay containers to prevent them from cracking.

First, you’ll want to remove debris from the containers, which can be done with a soak in warm, soapy water — brushes or steel wool can be used to remove extra difficult deposits. Then the sterilization: Use a mild bleach solution, one part unscented chlorine bleach to nine parts water (in other words, one cup of bleach for every nine cups of water). You’ll need to mix enough solution to completely submerge the containers for 10 to 15 minutes, which can be done in a five gallon bucket or a deep sink. After soaking, rinse the pots with warm water then give them a gentle scrub down with some soapy water. Follow up with one final rinse until the water runs clear, then set the pots out to dry.

Then there’s all that left over soil — it may look a little spent, but experts guarantee it’s got life-giving potential yet, especially if you take the time to recondition it properly.

“It does get expensive if you’re buying new soil every year,” says Davidson. But Davidson says that reconditioning and reusing soil is a common practice and there are many ways to go about it.

“First of all, you want to be careful, because if you have disease in your soil and you’re not aware of it, that can be an issue,” says Davidson.

Davidson adds there’s a perfectly good chance you’re not going to have anything in your soil, but to test it out, throw a few easily germinating seeds into the old soil, such as lettuce. If the seeds don’t germinate, there may be an issue.

In an article for the Colorado State University Extension division, Laura Pottorff of the Colorado Department of Agriculture writes about methods by which to sterilize soil. With any method, you’ll want to remove all the plant material from the soil prior to sterilization (Pro tip: add it to your compost pile).

• Oven: You’ll need a meat or candy thermometer for this. Preheat the oven to 180 degrees Fahrenheit. Spread a thin layer of soil in a glass dish (you can also use clay or metal), no more than 3-4 inches deep. Cover with aluminum foil and stick the thermometer in the foil and let sit in the oven for 30 minutes. Watch to make sure the temperature in the soil doesn’t go above 200 degrees. Fair warning: Experts and DIY-ers around the Internet say this will smell bad. Consider yourself advised.

• Microwave: You can nuke about two pounds of soil for 90 seconds on full power. Obviously, don’t use aluminum foil or metal containers to do this.

• Pressure cooker: If you’ve got such a device, Pottorff suggests pouring “several” cups of water in the cooker, then placing shallow pans with no more than 3-4 inches of soil on the rack of the cooker, each pan covered with aluminum foil. She advises that you close the lid of the cooker, but leave the steam valve open until steam begins to escape. Then close the steam valve and heat at 10 pounds pressure for 15 minutes.

“Many heavier soils and soils containing large amounts of organic matter may release toxic compounds when heated too long or at too high a temperature,” Pottorff warns in her article — so be mindful of the temperature of the soil as you heat it. “These toxins can cause poor seed germination, plant growth abnormalities or plant death.”

Answering questions on GardensAlive.com, Mike McGrath, host of Public Radio’s You Bet Your Garden, writes that a gardener’s biggest concern with reusing soil should be the oh-so-sensitive tomato.

McGrath suggests labeling two plastic trash cans, one with a ‘T’ and the other without, to store soil over the winter.

As for reconditioning soil, if you’re planting in a container, you’re going to want to make sure that your medium is light and fluffy and able to drain easily. To achieve this, add some fresh soil-free mix (also called professional mix, seed-starting mix or sterile growing medium) to every pot that gets filled with old soil. This mix is generally composed of milled peat moss, perlite, vermiculite (naturally occurring minerals that are heated to form little balls) and a bit of compost. Fill about a third of the total space of the container with new soil-free mix if the dirt if very old, and a bit less if the soil is still fluffy.

“Always add fresh compost to the tune of one-quarter of the container,” writes McGrath.

For some tips on composting, visit www.ext.colostate.edu/sam/compost.html for a list of links to composting guides.