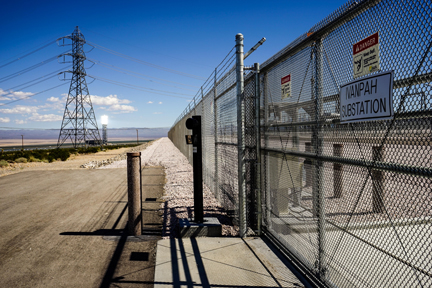 It’s an undeniably gruesome image: A bird soars over the Mojave desert, and suddenly, revoltingly, catches fire, streaks momentarily like a small meteor, and then seems to disappear, leaving only smoke. Seen from afar, some are calling them “streamers.”

This is what has been happening in the skies over Dry Lake, Calif., just across the state line from Nevada, at the Ivanpah Solar Electric Generating System — at 3,500 acres, it’s the largest industrial-scale concentrated solar power project in the world. Ivanpah blankets what was once nearly pristine desert. Now it hardly bears resemblance to a desert landscape: Nearly 350,000 mirrors, or heliostats, form concentric circles around three identical concentrated solar power towers, each one 459 feet high, as tall as a 33-story building. This isn’t solar photovoltaic, where crystalline panels convert the sun’s energy into electrical current. Atop each concentrated solar power tower, a massive rectangular boiler glows white-hot, as reflected light from the hundreds of thousands of precisely calibrated mirrors shine directly on it, turning water in the boiler into steam energy. The steam is forced down the tower where it powers a turbine that produces electricity, which is then transmitted directly into the grid.

The sea of computerized mirrors follows the angle of the sun throughout daylight hours. From tens of miles away, visible rays of light shine on each of the three boilers. The glow is almost heavenly — but the glow reaches blistering temperatures of up to 800 degrees Fahrenheit. Scientists speculate that birds might be drawn to the facility because this swathe of desert now resembles a sea, an illusion created by superheated air — called a solar flux — between the mirrors and the boiler. The descriptions of the deaths can be grisly: “feather damage ranging from singeing to charring,” skin burns, wing curling and melting, and of course “streamers.”

Gruesome as it may sound, at this stage it’s hard to say how many birds are dying (or being otherwise injured) at Ivanpah. The best data available is laid out in a report by the U.S. Fish and Wildlife Service Forensics Lab, intended for internal use but made public in April via a Freedom of Information Act request. The report chronicles the cause of death of 233 bird carcasses collected at three solar facilities in October 2013, 60 percent of them at Ivanpah — 127 birds, 49 species. Only about one-third of the birds (47) were identified as having been killed by the solar flux. Another 24 died of impact trauma — probably from colliding with a heliostat — and the cause of death of nearly 50 of the bird carcasses was undeterminable. The report makes clear that there were challenges to data collection: Carcasses degrade rapidly, scavengers (like hyper-efficient ravens, who appear to be residents at Ivanpah) remove carcasses, and “searcher efficiency” isn’t perfect across such a vast and massive-mirror-covered terrain.

“The numbers of dead birds are likely underrepresented,” the report reads. “Perhaps vastly so.” Ivanpah is now implementing an Avian and Bat Monitoring and Management Plan approved by state and federal agencies and required by permit, and already the numbers appear higher. Under the plan, Ivanpah has reported 321 avian fatalities between January and June of this year, of which 133 were related to flux.

But to put the issue in perspective, of the 10 to 20 billion birds thought to live in the U.S., multiple millions die every year from human causes. The numbers, insofar as they’re available, point to windows, cars and cats as the big-time bird killers in North America. Many hundreds of millions of birds die from collisions with glass windows — experts say glass kills perhaps more than 900 million, more than any other human related factor. The Audubon Society says house cats kill an estimated 100 million birds. Cars and trucks kill another 50 to 100 million. Bird hunters kill upwards of 100 million, according to the Fish and Wildlife Service. As many as 174 million birds die from collisions with electric transmission lines. Agricultural pesticides poison up to 67 million birds yearly. Collisions with communications towers (such as cellular network towers) claim the lives of up to 10 million. Even oil and gas extraction, which facilities like Ivanpah are ostensibly helping us rely on less and less, cause 1 to 2 million bird deaths per year. Wind turbines, often demonized as major bird slayers, are estimated to kill up to 330,000 birds per year.

But of course, utility-scale solar like Ivanpah is still new territory and its long-term environmental impacts are unknown.

“These are big, giant experiments that we’ve never done before on areas that are virtually ecologically untouched,” says Ilene Anderson, senior scientist and desert public lands expert with the California office of the Center for Biological Diversity. When plans were being laid for Ivanpah, it was the Mojave desert tortoise, an ancient reptile listed as threatened under the Endangered Species Act since 1989, thought to be the most imperiled by Ivanpah, which is actually sited within the Northeastern Mojave Recovery Unit designated for the tortoise. Although the Center for Biological Diversity had its doubts about Ivanpah in the development stages, the organization reached a settlement with BrightSource Energy, the owners of the facility, agreeing not to sue in exchange for BrightSource’s commitment to take major actions to reduce impacts on the tortoise.

A much smaller environmental organization, the Western Lands Project, did file suit — not against Ivanpah, but against the federal government for making Ivanpah and many future industrial-scale solar projects possible. The lawsuit took issue with a document called the Programmatic Environmental Impact Statement for Solar Energy Development in Six Southwestern States, in which then-Secretary of the Interior Ken Salazar approved about 300,000 acres of solar energy zones, but also left 19 million acres of public lands “open” to possible future industrial solar facilities. Western Lands Project says the government did not adequately explore the alternatives to industrial solar in desert habitat, such as distributed generation in urban areas — a photovoltaic panel on every commercial rooftop. The U.S. District Court judge ruled in favor of the government and the case went to appeal in the Ninth Circuit.

“It’s an utter transformation of that landscape — that’s what’s so alarming about this project,” says Janine Blaeloch, director of Western Lands Project, who says such massive and long-term projects as Ivanpah amount to privatization of public lands. “It’s a blight in every way. It’s not just that birds are being burned, but if that’s what it takes to get the public attention” — then so be it.

To be clear, the Center for Biological Diversity is concerned with the industrial-scale approach to solar as well. It calls the Interior Department’s approval system “rather dysfunctional,” granting solar companies permits in ecologically sensitive areas.

“We live in a society with a utilitycentric model of energy production and distribution that tends to favor large-scale private projects on public lands over smaller-scale local projects,” the center writes in the document explaining its settlement with BrightSource. “If we had a better incentive and regulatory structure, more projects would likely be proposed on disturbed or fragmented lands close to communities rather than in more remote desert locations, more houses and industrial buildings would be retrofitted with rooftop solar panels, and no new construction would be allowed that did not contain rooftop and parking lot solar or other attendant renewable power on site.”

“We need to do renewable energy that doesn’t do further damage to wildlife that’s already being impacted by climate change,” Anderson of the Center for Biological Diversity says. The center has filed a 60-day notice of intent to sue the federal government for failing to protect the endangered Yuma clapper rail from harm at two other industrial-scale solar (photovoltaic) facilities in the California desert, Solar Gen 2 and Desert Sunlight.

For its part, Ivanpah is addressing the bird fatality issue. More than 25 biologists are employed full-time on site at any moment, including several focused solely on administering the Avian and Bat Monitoring and Management Plan. A number of contractors have been hired to implement a range of avian deterrent systems, like anti-perching devices, heliostat repositioning techniques (to randomly scatter light from mirrors that are not in use), and replacing the facility’s lights with LED bulbs to attract fewer insects (another possible attractor for birds). Jeff Holland, communications director for NRG Energy, which manages Ivanpah, says NRG has already spent upwards of $30 million on environmental impact mitigation. NRG aims for a fully transparent environmental monitoring process: Monthly compliance reports to the California Energy Commission and the Bureau of Land Management are posted to the California Energy Commission website, among thousands of pages of related documents. But it’s still far from clear which bird deterrent methods are yielding actual results. More research is needed, Holland says.

While there does not have to be an either/or choice between renewable energy and conservation, Ivanpah is making it clear that the tradeoffs can be considerable. Perhaps Ivanpah’s dramatic “streamers” will help focus public attention not just on the plight of animals that soar above the desert, but also those who plod, amble and scramble through it. And to consider not just the effect on animals, but the unknowable consequences of industrial-scale solar projects on the entire desert landscape.

“We want to make it so the public understands that there is a different way to do this,” Blaeloch says.