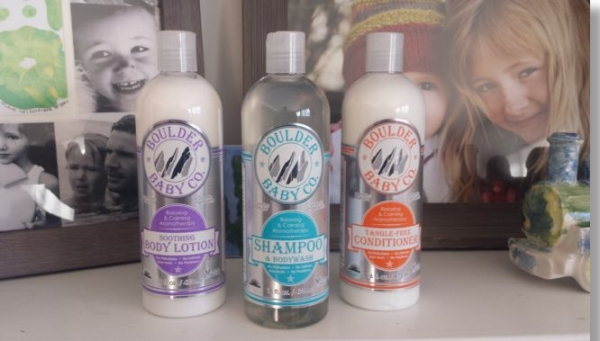 A local company joins the ranks of national businesses aimed at removing harmful chemicals from children´s products — but is it enough?

Jay Palmer’s been in the salon industry right around a decade, give or take a year. He’s owned more than half a dozen salons, and currently runs the four Floyd’s Barbershops in northern Colorado — one in Boulder, another in Longmont and two in Fort Collins.

A few years ago, Palmer began talking to family and friends about creating a line of what he calls “clean” personal hygiene products: vegan and gluten-free shampoos, conditioners and lotions with no parabens, sulfates, phthalates, carcinogens or synthetic fragrances. And while Palmer’s a businessman, he’s also a parent, and like most parents, his two children are his primary focus.

“When I started doing research and started learning what was in these types of products, I decided I would focus on my kids and try to make something that would be the cleanest and the best product you could find on a professional level,” Palmer says.

Palmer joined forces with fellow Boulderite parents Josh and Lauren Ginsberg, and in January their freshly minted Boulder Baby Company rolled out its first three products — a shampoo, a conditioner and a lotion.

“It took us eight months to develop three products. You’d think usually turn around would be quicker. We just wanted to do it right,” says Palmer. “Doing research, finding out what ingredients to keep out, was huge.”

Recent research has made the public acutely aware of the growing list of commonly used industrial chemicals that are known to interfere with the human hormonal system. These so-called endocrine disruptors, which mimic the sexual hormones estrogen and androgen, are particularly detrimental to children’s developing brains. Like the Boulder Baby Company, many businesses across the country have shifted their business models to develop natural products that seek to create a toxic-free environment for kids, from plastic baby bottles to nursing blankets to hygiene products.

Dr. Philip Landrigan at Mount Sinai School of Medicine in New York and Dr. Philippe Grandjean from Harvard School of Public Health in Boston authored a study in February’s The Lancet Neurology journal that found the number of chemicals known to injure the developing brain has doubled since 2007.

“Neurodevelopmental disabilities, including autism, attentiondeficit hyperactivity disorder, dyslexia and other cognitive impairments, affect millions of children worldwide, and some diagnoses seem to be increasing in frequency,” reads the study. “Industrial chemicals that injure the developing brain are among the known causes for this rise in prevalence.”

Perhaps the most ballyhooed of the endocrine disrupting chemicals is bisephenol-A, or BPA, a carbon-based synthetic compound used to make the plastics and epoxy resins that form baby bottles, sports equipment, CDs and DVDs.

Bisphenol A can mimic estrogen by binding and activating the same receptor as the natural hormone. BPA has been shown to cause negative health effects in animal studies.

The Food and Drug Administration banned BPA in baby bottles and sippy cups in 2012, but the chemical can still be found in a number of common products, such as canned goods, cash register paper and ATM receipts.

Family-owned company Pura, which operates out of Santa Barbara, Calif., produces BPA-free and nontoxin-leeching stainless steel drinking bottles for infants, toddlers and adults. Like the Boulder Baby Company, owner and co-founder Jennifer Moore says they developed their products out of concern for their child’s health.

“We were giving our child a strong vitamin supplement and it would leave a strong smell in the plastic bottle. It didn’t make us comfortable. We couldn’t find any bottles that didn’t have plastic components. That was before the first round of non-BPA products was available for consumers,” says Moore.

Pura bottles can be found in 40 countries. Moore says that Pura products combine stainless steel with medical-grade silicone so the contents of the bottle never come in contact with plastics.

“Silicon is hypoallergenic — it has no plastic and no petroleum-derived ingredients. You can get medical-grade silicone that leaks nothing [when heated]. When we have signs up at trade shows people ask, ‘What’s this?’ Our task is to educate the consumer that silicone is not plastic.”

Moore says despite the increased cost of producing bottles out of steel and silicone, consumer response has been positive and the business model is working for Pura.

“We’re focused on not doing things the easy way. It’s cheap and easy to make things out of plastic. It’s much more expensive to make things out of quality material like silicon and steel — but your retail price isn’t that much more than what other brands charge for a BPA-free bottle,” she says. “What the consumer would consider a higher-end brand of BPAfree bottle is $9 to $10. Ours is $16.

When it’s under a $20 price point, it’s a no-brainer. For our consumer, it’s what’s best for their child and in the scheme of things it’s not that expensive when it lasts.”

But because the list of “developmental toxins” continues to grow, many parents still have concerns about how to reduce their children’s exposure to harmful chemicals. Perry Sheffield, a pediatrician with a specialty in environmental health at Mt. Sinai Hospital, says the answer isn’t simple.

“While people can do things to reduce children’s exposure to toxic chemicals, and companies can make better choices when picking raw materials for their products, it really comes down to reforming the Toxic Substances Control Act,” she says.

According to the U.S. Government Accountability Office, the Toxic Substances Control Act “generally places the burden of obtaining data about existing chemicals on [the Environmental Protection Agency] rather than on chemical companies. For example, the act requires EPA to demonstrate certain health or environmental risks before it can require companies to further test their chemicals.”

Sheffield says it’s not enough. “Eighty-thousand chemicals are mass produced in this country. Who can keep it all straight? Until the burden of proof is shifted to the people who produce the chemicals, then it’s going to be very hard for not only individuals to make safe choices for their children, but also for companies — even the best-intentioned ones — to make safe choices about what they put in their products,” she says.

“It’s kind of a David and Goliath situation. There’s no way [NIH] could do enough research fast enough for EPA or FDA to regulate those chemicals,” Sheffield says.

Palmer says it was a learning experience to create Boulder Baby Company’s first products. He and his partners had no background in developing hygiene product formulas, so they used a database compiled by the Environmental Working Group called Skin Deep to look into the potential health hazards of more than 1,500 chemicals. They are happy with their first products, but he says he knows that products from the Boulder Baby Company will continue to evolve as their knowledge grows.

“As we grow, we want to continue to find the cleanest products for our formulas,” Palmer says. “We’re not going to leave our formulas the way they are — we’ll make changes as we see fit, especially as more testing is done and as we learn more about these ingredients.”