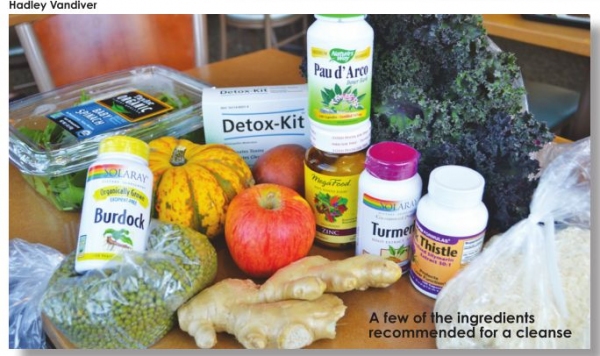 From detoxifying diets to juice fasts, different dietary cleanses abound, claiming to rid your system of toxins and help you lose weight. People who regularly cleanse say they feel better, look thinner and think more clearly after a cleanse. But some dietitians argue that your body does all the cleansing it needs on its own.

So why do people cleanse in the first place? People choose to cleanse for a variety of ailments, says Susan Van Raes, nutritional therapist, life coach and owner of Boulder Nutrition. People cleanse to achieve weight loss goals, to alleviate body pain or inflammation that could be related to autoimmune disease or arthritis, to combat high cholesterol and high blood pressure, to relieve digestive issues, and even when recovering from surgery or chemotherapy, she says.

“I think that, honestly, our cells are just so bogged down with toxins that everything is just not functioning at its optimal rate,” Van Raes says. “It could be mentally, it could be deep in the digestive track, it could be in the colon. There’s many things that toxicity interferes with, and you just need to get all that stuff out of your body.”

The cleanse that Van Raes uses is one she developed that blends a number of different medicinal philosophies. She incorporates some elements of Western clinical nutrition by using a “whole foods-based” diet with nutritional foods, such as oatmeal or nuts, to keep the blood sugar stable. Herbs such as fennel, peppermint, pau d’arco and burdock root, which encourage digestion, and ionic minerals, such as selenium, are used to aid in cellular detoxification, Van Raes says. The cleanse also employs Chinese medicine principles, which means that fruits and vegetables vary seasonally. For example, baby greens, kale, dandelion greens and spinach are encouraged in spring, while squash, apples, carrots, pears and squashes are usually reserved for the fall. Each season focuses on cleansing a different organ, Van Raes says, with liver being the focus of spring and lungs in the fall.

“I cleanse three or four times a year at least,” Van Raes says. “And I find that I have more energy, and I sleep better. The most obvious symptom, to me, is I have this really different sense of mental clarity when I cleanse. I feel like my mind and my thoughts are so clear, and I’m really productive when I’m working and then I can relax better when I’m not working. I just always feel the best that I can feel. I truly stand behind it.”

Dr. John Douillard, owner of the LifeSpa Ayurvedic Retreat Center in Boulder, developed the two-week-long Colorado Cleanse after living in India for eight years and working with Deepak Chopra. The first four days of the Colorado Cleanse are known as the digestive reset, Douillard says. Participants eat no dairy, no nuts, no wheat products and very little fat. Cleansers in this phase are encouraged to eat fresh fruits and vegetables, such as apples, beets and zucchini. These first four days of the cleanse are designed to prepare the digestive channels of the body before the process of detoxification begins.

“If we just go ahead and do a detox, and don’t recognize that there’s a reason why the cells got toxic in the first place, then we just move the toxins from one fat cell to another and never really address the reason why the body got toxic,” Douillard says. “So this cleanse is an ayurvedic, holistic, complete cleanse where we do a real thorough kind of reset of every aspect of digestion, and a reset of the detoxification ability, and then when we do the detox, your body knows what to do with those toxins.”

In the next seven days of the cleanse, participants eat clarified butter, also known as ghee, in the morning, and then eat a “completely no-fat diet for the rest of the day,” Douillard says. This no-fat diet focuses on khichadi, made of split yellow moong dahl beans and white basmati rice.

“Because you have that clarified butter in the morning, your body is forced to go into fat-burning mode,” Douillard says. “And then when you have no fat in your diet, your body has to burn its own fat.”

Participants in Colorado Cleanse eat three full meals a day, they do not end the cleanse starving and wanting to binge, says Douillard, a self-professed ravenous eater.

“The problem is that as a culture, not only do we get toxic, but we have become really lousy fat burners,” Douillard says. “Our culture has become fat, we’ve become overweight, and we’ve started eating lots of sugars and carbs and nibbling every two to three hours. The body has lost its ability to make energy last for many hours because it’s conditioned to eat meals every two to three hours because we’re grazing and snacking all the time.”

By participating in a cleanses throughout the year, Douillard says the body becomes a better fat-burner, allowing a person to keep energy for longer, sleep more soundly and experience fewer issues with blood sugar levels.

Both Douillard and Van Raes say that quick fixes and extreme fasts are not the way to go about losing weight or helping your body become healthier.

“Fasts have been going on in this world for thousands and thousands of years, and they might work for some people, but I don’t think they are a good entry point for someone who is coming off of a mainstream diet,” Van Raes says. “I think that a) they’re going to have way too much resistance, and b) their body’s going to be in shock. Fasting can definitely be dangerous if it’s not done correctly, so being supervised is important.”

Rather than choosing to do a fast or cleanse that might involve days without food, they suggest that more natural, simple cleanses can help reset the body.

By eating a clean and healthy diet of foods such as fruits, vegetables and proteins, like lean meats or nuts, our bodies can usually detoxify themselves well enough on their own, says Cathy Hayes-Daly, certified nutritionist and owner of Nutrition Power in Boulder.

“Your liver needs food, everything needs energy in order to work well,” Hayes-Daly says. “And we have no control over where that energy comes from.”

There is little concrete evidence about whether fasting and cleansing works or doesn’t work, Hayes-Daly says, and it is necessary to be careful and conscious of your own bodily health when looking into drastically changing your diet, even if only for a week.