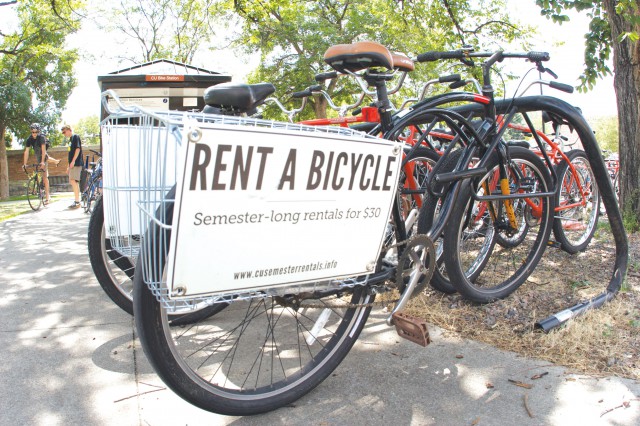 Though you’ve likely already heard that college will be some of the best years of your life — which has some truth to it — there will also be times when everything isn’t coming along just dandy. But just because your mom isn’t around to help doesn’t mean you won’t survive. All you really need to know is where to go when it’s time to seek some outside help.

WHEN YOU NEED TO EAT, OR GET INTO YOUR DORM, OR GO TO A FOOTBALL GAME, OR…

In your first year at CU, there is one card that stands above all the rest in terms of importance (and no, it’s not your dad’s credit card). Your Buff OneCard is your ticket to pretty much anything you’re going to need at CU, and is considered your official university identification.

Your Buff OneCard will get you into your dorm, any campus events, including football and basketball games if you’ve paid for tickets, and all campus dining halls and grab-n-go outlets if you have a traditional meal plan. It also holds the ever-important “munch money” you get with your meal plan that lets you buy as many Arizona Iced Teas and Cheetos as you can carry in your backpack. The Buff OneCard also holds your print quota — money added to the card every semester so you can print on campus — and comes with an RTD EcoPass sticker, allowing you to ride any regional or local bus for free.

Think of it as the one card to rule them all. Try not to lose it, because you pretty much won’t be able to do anything until you get a new one (and the office is closed on Saturdays and Sundays, so if you lose it on Friday night, you’re going to have a long, hungry weekend). Call 303-492-1212 if you do lose it or you think someone stole it and they’ll give you a new one for a cool $25.

WHEN YOU NEED A RIDE…

The CU NightRide can be your best friend when you realize that you’re going to have to walk all the way back to your dorm on your first seriously cold night in Colorado.

The NightRide is a free resource for all CU students, and operates six cars a night during the school year, with each car taking a ride every 15 minutes. The NightRide operates an average of 150 rides for 350 people per night, says Brendon Wilson, assistant director of operations for the NightRide.

“The NightRide is especially beneficial for freshmen, because a lot of them don’t have cars on campus that first year,” Wilson says. “[Night- Ride] is great because it gives you an option that’s free, you know who’s picking you up and who’s dropping you off, you know it’s sponsored by the university, so it’s safe.”

There are certain locations around Boulder that see a higher amount of traffic for the NightRide than others, Wilson says, including the Norlin Library, the UMC, Williams Village and University Hill.

“We get this image as the ‘drunk taxi,’ but during the week there are a lot of people going to the grocery store, going back and forth between work, going to the library to study,” Wilson says. “It’s not all just drunk people looking for a ride. We pull extended hours during finals so we can drive people home late from the library.”

Using funding from the student government, the NightRide was able to purchase a new van this year. In addition to the van, the NightRide operates two hybrid cars, a diesel car and two four-wheel-drive cars.

WHEN YOU’D RATHER BIKE THAN RIDE…

There are a couple of places on campus and off that allow for quick and easy bike rentals. B-Cycle, a nonprofit bike share program, allows members and day users to pick up, ride and drop off bikes in different locations around Boulder. Visit its website at http://boulder.bcycle.com or call 303-532- 4412.

The Environmental Center at CU also offers a couple of bike rental options for students. The Buff Bikes program has 60 single-speed cruiser bikes that are available to borrow on a 48-hour basis, free of charge. Visit them at the bike station near the UMC, or contact bicycle@colorado.edu for more information. You can also rent a used bike for the entire semester, which will cost you $30, plus a $100 deposit that you get back if you return the bike in the same condition.

Once you’ve got your wheels, you can take advantage of Boulder’s more than 300 miles of bike lanes, routes, designated shoulders and bike paths. Visit Bouldercolorado.gov for a downloadable map and a list of safety tips — including wearing a helmet and light clothes, signaling to pedestrians when you pass and obeying the speed limit and the Bicycle Safety Act.

WHEN YOU REALLY GET IN TROUBLE…

At any given time, there are around 40,000 people on campus, so CU functions like its own small city. And cities have problems. And police. But don’t worry. Just because your new home has its own designated police force doesn’t mean that you’re automatically destined for jail time. In reality, it usually means that if you truly get into a bad spot, help can be on the way in a matter of minutes.

The UCPD can help you out in a number of different ways. Because calls made to 911 from campus are directed to the UCPD dispatcher, one of the UCPD’s 46 commissioned police officers will be responding to emergencies.

The UCPD can also come to your rescue if one of those pesky bike thieves nabs your only form of reliable transportation or, horror of horrors, steals the laptop that has your entire semester’s worth of music downloads (we mean, class notes) on it. You can help them out by registering your precious items when you first get to CU. Bring your bike to the bike station outside the UMC and they’ll record the make, model and serial number, and give you a sticker with your registration information on it.

“Then, if it’s ever stolen, we enter it into a national database that law enforcement agencies across the country use,” says Ryan Huff, UCPD communications manager. “We’ve actually had some success stories of bikes turning up in Arizona or Denver or other areas of Colorado that we wouldn’t have been able to recover had that person not registered their bike.”

The same is true for laptops, which can be registered with the City of Boulder police, the UCPD and the Office of Information and Technology on campus.

The UCPD can also be a resource when a fun night suddenly turns scary and you think your friend might have taken one too many shots of tequila. If you do feel that a friend might be in need of serious medical care, you may be immune from getting in trouble (like, say, getting a minor in possession of alcohol ticket) if you call emergency personnel, stay with your friend and cooperate with emergency services.

“You can drink enough alcohol to kill yourself, so this is a serious matter,” Huff says. “I would say our officers use discretion — it’s a judgment call. So that doesn’t mean that someone will always get out of a ticket, but if you’re doing the right thing, and generally looking out for your friend, that will be factored into deciding whether you get a ticket or not. The health, safety and welfare of people is our top priority.”

When all those late nights, exam stress and germ (and perhaps junk food) exposure finally catch up with you, it helps to know the fastest route from your dorm to the Wardenburg Health Center. Wardenburg can help you with most ailments, including illnesses and injuries, STD testing, vaccinations and psychological health. Make an appointment online through MyCUHealth with your student ID number, or by phone, but be warned: Wardenburg’s only open 10 a.m.–2p.m. Saturdays, and it’s closed Sundays.

WHEN YOU NEED A JOB…

There is nothing quite as scary as the moment you realize that your parents sent you off to college with the hope that someday you would get a “real job.” You suddenly wonder if all those classes you took that have zero practical applications might have been a bad idea. When that moment hits, Career Services is the place to go.

Career Services has an online system called Career Buffs that features a newsletter and listings of internships, jobs and events, and a team of career counselors you can talk to in person. And you don’t have to be nearing graduation to need Career Services. The counselors work with students at all levels, says Lisa Severy, director of Career Services.

“About 60 percent of our incoming students are classified as ‘open option,’ meaning they haven’t selected a major, and even those who have selected something may still be exploring,” Severy says. “Our career counselors work closely with academic advisors to help these students identify their strengths and how those strengths can be explored during college and then after graduation in the workplace.”

Career Services also hosts career-related events throughout the year, like alumni panels and workshops, to help students feel a little less intimidated by the whole process.

“Many students feel somewhat lost at some point in their college careers,” Severy says. “The process of applying for, getting acceptance and choosing a school can be both exciting and overwhelming. When you reach that goal, it’s really important to choose a new one to help you stay on track.”

WHEN YOU NEED TO WRITE A PAPER…

When that horrible constipation of the mind called writer’s block hits and you just can’t seem to pass it, the people in the Writing Center could soon become your new laxative. The Writing Center has writers and trained consultants available to help you write a paper that could satisfy even the toughest professor.

Make an appointment to talk with a staff member from the Writing Center, and they will give you feedback and advice on your ideas, grammar, style and general quality of your paper.

The Women’s Resource Center functions mostly as a referral and reference service for anything a woman might need, including services both on campus and in the community, says Amanda Linsenmeyer, WRC director.

These services can include everything from counseling services and reproductive health clinics, including free pregnancy tests on site, to career services and internship opportunities.

The WRC also puts on a number of programs during the year that deal with issues women might be dealing with.

“We have smaller programs that focus on stalking, or eating disorders, or how to change the oil in your car, and then we also have our big, signature programs like ‘Women who make a difference’ and ‘Sex-pressions,’” Linsenmeyer says. “These programs are all free and open to the public, and they are really the face of our organization.”

The WRC can be a helpful resource for women who are struggling with an issue and don’t know which service to go to for help, she says.

“We really pride ourselves on being a welcoming and helpful place to get people to the resources that they really need,” Linsenmeyer says.

Head into their office in the UMC if you want to learn more.