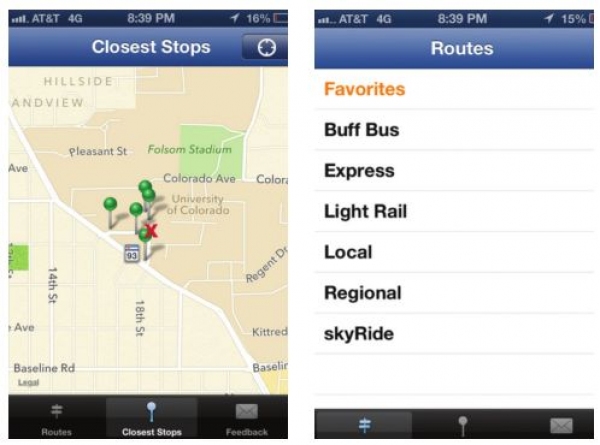 Putting the university in the palm of your hand

You may have a smart phone, but these mobile-specific apps and campus services will make yours a smarter phone for a student.

For navigating the Boulder labyrinth

There’s no recess in college, but CU students still hop, skip and jump everyday. Beeline RTD 2 (iOS) helps you take advantage of your all-access student bus pass — a more than $1,400 value paid for by your student fees. This app is the equivalent of carrying dozens of those bulky bus-schedule brochures in your pocket. Most app complaints concern not updating soon enough when RTD adjusts their schedules — as if buses were ever precisely on time. But, the majority reviews echo app user “Savvy Sarah Jane,” who says it’s “super handy for regular bus riders.” A legitimate drawback to this app is that it doesn’t have a trip advisor feature built in, so it’s not great for figuring out which line will take you from the Hill to 29th Street Mall. Google Maps (iOS, Android, Windows) is much better for this, and Google Maps stays up-to-date on the bus schedules. But with schedule data for all bus routes and a map that locates the nearest bus stops, Beeline RTD 2 is great for figuring out which bus to take to your 8 a.m. class and when that bus comes again when you’ve pressed the snooze button on your alarm clock one too many times.

For getting around a foreign language

If you are polishing your Spanish before studying abroad, an International Affairs major required to learn a foreign language or an out-of-state freshman missing your Minimum Academic Preparation Standards (MAPS) requirement in foreign language, leave the bulky phrase book on the shelf and download Word Lens (iOS, Android). This augmented reality app works like magic. It translates words right on your screen using the phone’s built-in camera. Hold your phone over the phrase to see words in Spanish, Portuguese, German, Italian or French instantly translated into English on the screen, or vice versa. Just keep it in your pocket on exam day.

For connecting to the Matrix

The Office of Information Technology (OIT) has a sweet suite of services for putting the school’s resources literally at your fingertips, whether you have an iPhone, Android or even a Windows phone, and without having to download any apps. The smartest? Being able to send and receive CULink e-mail on your mobile device’s native email program. It’s easier than it sounds. You can stop by the OIT building or the Norlin Library Help Desk to have this set up for you, there are also instructions online that are easy-to-follow — even if you’re not a computer science major.

Once you can send messages from your @ colorado.edu address on your phone, you can also print on any of more than 100 campus printers with it. OIT spokesman Greg Stauffer says he’d love to be able to say that they pioneered mobile printing on college campuses, but California State and Georgetown University already have a wireless printing solution. However, CU’s Mobile Printing Pilot Program, which launched this summer, is much simpler. Attach your essay or spreadsheet to an email, send it to colorprinting@colorado or bwprinting@colorado.edu (for color or black and white printing, respectively) address and the job will be in any printer on campus for you. Just swipe your student ID and print within 24 hours of sending that email.