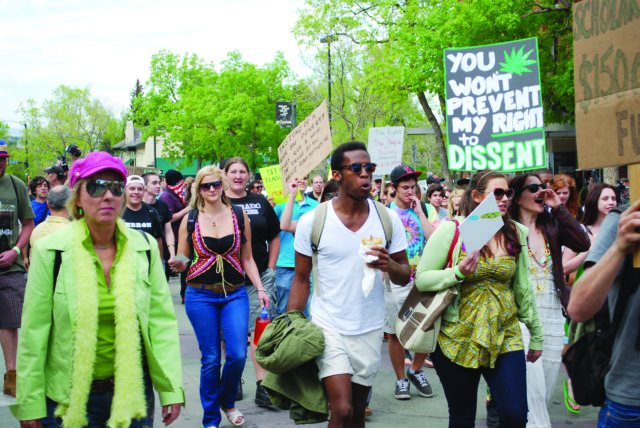 Here’s a little helpful background and advice for newbies when it comes to doobies, CU and 4/20. I know it sounds like a really good idea to put all those things together, but…

Heck, it’s probably the real reason you spent so much time and effort convincing your parents to let you go to college in Boulder, Colorado, in the first place. You probably pulled the old “I want to be an astronaut” rouse, pointing out that CU’s the place for space. That one gets them every time. It reminds them of the cute stuff you said when you were 4 and they still believed you were special.

But hey, it’s not your fault you had to tell a fib. Parents just can’t handle the truth. In a perfect world, you should have been able to just look them in the eye and say, “I need you to lay out a hundred grand so I can go to college in the land of legal pot, where I’ll post enough embarrassing selfies to keep me out of the workforce for 40 years.”

But it’s not a perfect world, nor a perfect university.

In fact, if history is any predictor of the future and you make the mistake of heading to the Norlin Quad at 4:20 on 4/20, thinking that lighting up that super-special, cigar-sized joint you’ve been saving up for the occasion is an expression of free speech, you’re likely to find yourself covered in fish guts after getting tased by an over-steroided cop in riot gear.

Don’t believe me? Consider the great lengths the current administration has taken to prevent past 4/20 celebrations on Norlin Quad. They’ve covered the entire quad in smelly, fish-gut fertilizer, spent a couple hundred grand to hire riot police, shut down the whole university and at one point offered up a free Wyclef Jean concert on 4/20 to lure students away from the temptation to celebrate.

All this transpired because for some reason, CU’s administrative big wigs think that lighting up at 4:20 on April 20 on the CU campus makes your future diploma so completely worthless that they are willing to make cops beat you with batons, subject you to arrest and/or expose you to really average reggae music in an effort to save you from the horrors of “diploma degradation.”

Don’t laugh. The hyper-conservative, Republican leadership that the Koch brothers and their Colorado gazillionaire peers have put in place to control CU has been doing secret research on this new campus plague and they now claim to know what causes it.

Apparently, the desire to fire up a fatty on the Norlin Quad on 4/20 is just one of the symptoms of diploma degradation.

If not quickly treated with a good dose of fish guts and cops, some students may begin to question whether nonviolent pot offenders should really be serving time in private, for-profit prisons.

In fact, if the cops on the quad — they prefer to be called “law enforcement therapists” — can’t beat your mind right in time, some sufferers of diploma degradation may actually start suggesting that the university should divest its interest in global-warming-causing hydrocarbons.

While this last symptom is serious, the university has spared no expense to help combat it. The benevolent billionaires who now control CU have made sure that at least half of the school’s elected regents are actually climate-change deniers. And to help the impacted students move on from this progressive illness, they have even enlisted the help of the state legislature to make sure the CU Foundation’s billions in investments are no longer subject to freedom of information requests. That way, the students won’t get distracted or have to worry their little heads about which oil and gas companies are getting their money.

As proof of the CU leadership’s commitment to halting this disease, this November’s election for the statewide CU regent’s seat has been manipulated, out of love and concern, to appear to be a choice of two different types of candidates.

But in reality, it’s between a Koch brothers acolyte billionaire schooled at the Leadership Institute of the Rockies (a place that thinks Ted Cruz is a liberal) and a loyal soldier of the Colorado Blueprint whose primary instructions from the Blueprint’s billionaire puppeteers is to keep natural gas and fracking going while using a lot of green sounding words at the same time.

If you are unfamiliar with the Colorado Blueprint, perhaps the best description is just to call it the Democratic Party’s version of the Koch brothers. A slightly different political agenda but equally committed to undermining democracy.

This university has gone the extra mile to save students like you from the life-long horrors of DD.

And it’s not just students who can catch it. A good number of professors and others teaching in CU’s classrooms have been hit so hard by DD that they’ve actually lost their voices. Some have even had to quit or be removed from their positions because they were simply too far gone for CU President Bruce Benson to save.

A mind is a terrible thing to waste, but if it can’t be molded into submission, sometimes tossing it into life’s garbage can is the most merciful thing to do.

But in all seriousness, I think the real reason for the 4/20 crackdown was because CU’s leadership believed that the national publicity surrounding pot smokers on the Norlin Quad was going to make it harder for them to get dollars out of older alumni and conservative corporations.

So to keep the bucks flowing and of course to allow CU’s conservative administrators to force their morality on students, President Benson and his loyal underlings invented the bogeyman of diploma degradation as an excuse for a crackdown on 4/20 and any other liberal ideas they don’t like.

But college kids ain’t that dumb. They always seem to find a way around rules that make no sense.

For instance, in 2012, they just marched to a different quad, lit their dope at 4:20, smoked it down and then wandered on over for some free reggae music.

The university wasted a half million dollars and accomplished absolutely nothing.

The likely reason 4/20 stopped being celebrated in mass on campus is because the bigger, better party is now located at Denver’s Civic Center Park sans the fish guts and riot police.

So if you feel 4/20 calling your name, just head south and avoid the diploma degradation disease.

And watch those selfies.