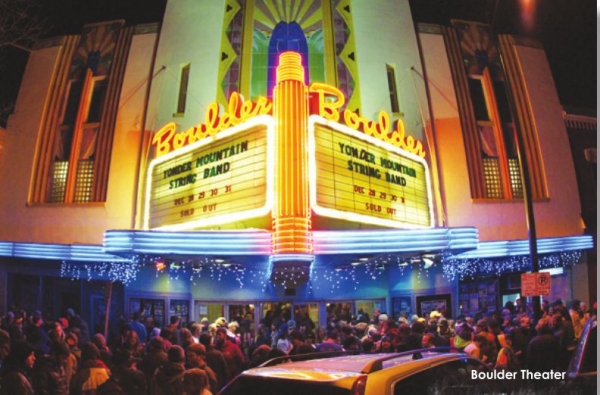 A roundup of some of our popular local venues

Now that you’re settled in, why not find something to do? Sure, you could burn thousands of calories exercising or burn thousands of brain cells waiting for 4/20, but sometimes we need to rely on others for happiness. What better way than to listen to other people play music while you and your friends eat, drink and commiserate about the homework you aren’t doing?

Tucked inside the Boulder Outlook Hotel on your way into town is Blues and Greens, the area’s preeminent place for blues and jazz. From soulful crooner Janiva Magness and blues guitarist Lightnin Malcolm to intimate Sunday jam sessions, this cozy room plays bigger than its confines.

“Being able to accommodate artists in a venue like Boulder Theater keeps the diversity of music and the arts alive in the town,” says Shannon Bock, marketing manager for the Boulder Theater and Fox Theatre.

As one of the area’s largest and more historic venues, Boulder Theater routinely draws high profile artists among its diverse offerings. With a little something for everyone, including movies and comedians, this centrally located gem is a popular location.

Despite great acoustics, this auditorium built in the 1800s is only open from May through September. Resembling a barn more than a spiffy modern outcropping, this rustic stage uniquely envelopes performers in the elements that make Boulder such an appealing destination. On the National Register of Historic Places for nearly 40 years, a trip to Chautauqua should be on the list of any incoming music fan.

By bringing an authentic Irish pub to Boulder, Conor O’Neill’s proves that America may still have a few things to learn since gaining our independence. Designed and built in Ireland, the timber floors and cottage wall transport patrons across the pond for a toast to the old land. Drop by any night of the week for live music — including open mic nights, bluegrass & folk, and traditional Irish music and dancing celebrations — to imbibe in the spirit of the Emerald Isle. You’ll feel lucky.

eTown is a Boulder institution. The weekly radio broadcast, pro duced in town and distributed to 300 radio stations around the country, recently built a home in its own venue.

“From the beginning, we wanted the building to be more than just a music venue. We wanted to become a place for the community,” says eTown new media coordinator Zack Littlefield on the renovated eTown Hall in downtown Boulder that opened last year.

The widely distributed radio show draws artists who might normally forgo a midsized room to play in a cozy venue with reasonably priced tickets.

Nick and Helen Forster, the hosts of eTown, lend a breezy and professional air to the back-and-forth between artist and audience. They interview artists on stage — often mid-set.

“You actually get to meet the artist and learn a little bit about them and in most cases it really helps people develop a deeper understanding of those artists and their process and their creative direction,” says eTown founder Nick Forster. “It’s something cool to be a part of a radio taping and to know that what happens in that 200 seat building is going all over the country and podcast all over the world.”

“The location and the size of the Fox definitely accommodates the college demographic,” says Bock. “A lot of artists love to come through and play the Fox.”

Located on University Hill, the Fox routinely brings in acts creating buzz throughout the industry. From hip-hop, electronic and dubstep to bluegrass, rock and metal, this building hosts a plethora of acts sure to suit the most discerning musical tastes. Further proof of the Fox Theatre’s essence came earlier this year when it was named the fourth-best club venue to watch a show by Rolling Stone magazine.

With live music and events every night of the week, this intimate coffeehouse brews up a diverse mix of talent. Audiences see their mental palettes expanded with events such as poetry night, jazz night and a rotating schedule of local musical talent.

This venue is probably the easiest to find for Boulder students, since it is located on Norlin Quad. At around 2,000 seats, this auditorium handles opera, symphony and theater performances with no problems. From heads of state to actor and comedian Robin Williams, the Macky relies on variety to fill its auditorium.

These sister pubs serve up great brews and eats, but Sundays at Mountain Sun and Mondays at Southern Sun transform these rustic settings into rollicking music venues. Come for the food, wash it down with the day’s special beer, and stay to digest some of the area’s great live music.

An eclectic mix of dance, music and entertainment make Shine gathering place hard to pin down to any one style. Through social consciousness and the power of community, Shine has emerged as a beacon of entertainment in downtown Boulder.

This large venue between Denver and Boulder brings traveling all-star shows, concerts and sporting events to the area on a regular basis. Increased size can mean handling larger acts, which include upcoming artists such as Fall Out Boy, J. Cole and Nine Inch Nails.

Just east of Boulder in the town of Lafayette sits Nissi’s, an intimate restaurant and lounge focused on showcasing local talent and interesting outsiders. With music or entertainment nearly every night of the week, Nissi’s proves that good music taste doesn’t stop at the borders of the People’s Republic.

Also a bit east of the center of the universe is Waterloo in Louisville. Named after an independent record store in Austin, Texas, this neighborhood gathering place features all manner of original, often local, music to go along with fresh and natural menu items. The stage rocks out mostly on the weekends.

In addition to distributing one of Colorado’s most popular craft beers, Oscar Blues also gives back to the local community in the form of a rich musical program. Any night of the week could feature a solo artist or full band. Bluegrass and electric blues jams nights allow aspiring artists to strut their stuff, with local talent filling in the gaps with great sounds.

This venerable natural amphitheater is considered one of the iconic venues in the world. Nestled in the foothills of Morrison, the natural acoustics and breathtaking beauty have made this unique land feature a rite of passage for large mainstream acts and a stable for generations of music stars. This year is no exception, with acts such as Kid Cudi with Tyler the Creator, Sound Tribe Sector 9 (STS9) and The National dotting the concert calendar.