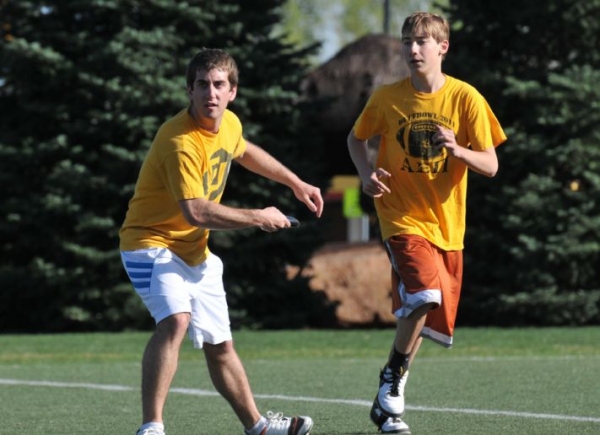 Many students resign themselves to the fact that their competitive athletic careers are over if they aren’t offered a scholarship to play in college. Others may lament that their recreational interests seemingly have no outlet once they are ensconced in academic life. However, a student at the University of Colorado can find competition and valuable life lessons by participating in club sports.

Providing a middle ground between the more recreational intramural sports and the highly regimented scholarship sports programs, club sports offer coaching, teamwork and activity in a framework that can fit into a busy campus life. While teams can be elite units, anyone with any ability is free to join a club sport — and still get a chance to compete at a serious level. Club teams routinely compete for national championships against other programs around the country. From freestyle skiing to equestrian to the 14-time collegiate national champion triathlon team, students have no problems scratching the competitive itch.

“Most of our programs are trying to compete on that [championship] level,” says John Galvin, coach of the men’s club lacrosse team. “Our student athletes are working hard to have a great experience in college, and that’s what we’re trying to offer here. You can play this highly competitive sport within whatever realm you want to play, and represent the University of Colorado as a national team.”

Despite success on the field that includes playing for a collegiate national championship, Galvin appreciates the lessons learned from being part of a team that don’t necessarily show up on the scoreboard.

“I feel that you’re getting this experience of being at a great university getting a great education, but then you have this other thing in your life that might end up down the road being where you met some of your best friends. It really just depends on what experience the student is after,” says Galvin. “There are a lot of opportunities for students that haven’t been able to learn the sport, and there are students here that are very, very good athletes.”

Senior mechanical engineering major and club triathlon president Jesse Frank echoes the sentiment that club sports are about much more than trying to win championships.

“On our team we have people who are low- and high-level professionals, as well as people who have never learned to swim join the team,” he says. “One thing we really stress as a team is our family atmosphere. The top guys on the team are always there to help the new team members, whether it’s how to change a flat on a bike ride or getting comfortable swimming in open water. It’s a very friendly atmosphere, and we want everyone to be included, whether you’re a seasoned veteran or just trying to give triathlon a shot.”

He speaks from experience.

“I knew literally one person when I came here. So [club sports] became my family,” he says. “Living in the dorms is fun and a great way to meet people, but I spent so much time with the people on my team that they’ve become my best friends and my family on campus.”

“We travel a lot, so you get to go places and meet all different people. You get to see parts of the country that, if you’re not from around here, you would probably never see,” she says. “Club sports is a good way to meet people who have common interests to create a bond and a friendship. It’s given me a lot of good friends, a lot of travel experience and a lot of leadership experience as well.”

Some sports are more individualistic. Fly fishing, Taekwondo and racquetball may be more lonely pursuits than an ultimate Frisbee team, but clubs provide avenues to improve your game and meet like-minded folks.

“Racquetball is a sport you can play your whole life. You meet people and make connections,” racquetball coach Mike Smalley says. “It’s a great social activity that you can make friends for the rest of your life. … Do your school work, try to make some friends, and get some expertise in the game that you can take with you [forever].”

Worried your studies will suffer from picking up another activity? A 2012-2013 collegiate club sports survey of the CU program showed that nearly 60 percent of responding students said that competing on a club sport team had a positive effect on their academic performance. With the basic tenets of time management and planning needed to course out social, academic and athletic endeavors, a club sports commitment can help students navigate the transition to college.

“I think it definitely helps me academically,” says senior math major Kate Booth, club swim team president. “It gets me more motivated to get my school work done during the day or whenever I have a break, and it creates a nice community where I met my best friends.”

Over his years as director of CU club sports, Kristopher Schoech has seen his program evolve from an ancillary one to an actual recruiting tool for prospective students.

“You’ve got to have something appealing for each student, otherwise they’re going to go somewhere else,” Schoech says. “People are actually choosing to attend the University of Colorado for their club sports program. It’s become the reality of today.”

All club sports have informational meetings in the beginning of the year. For a list of sports, club team officers and meeting times, check the CU club sports website at www.colorado.edu/recreation/clubsports/.