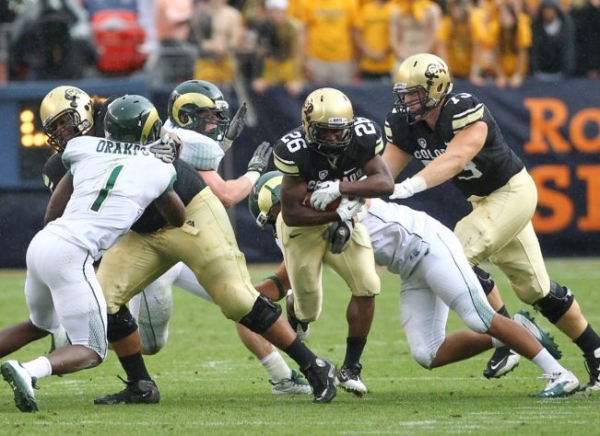 Buffs aim for a better season

There is an ugly wreck in Ralphie’s rear-view mirror. Colorado football has suffered through seven consecutive losing seasons, three recent coaching changes and the indignity of a one-win season. New head coach Mike MacIntyre, the architect of a dramatic rags-toriches story at San Jose State, has decided not to bring up the past with the players who already suffered through it.

“I focus on the now, I focus on the individuals here, I don’t focus on anything quote, ‘that happened last year,’” MacIntyre said. “As a football player, or as an athlete, I imagine you think about different games or different guys you went up against that you might want to get them when you see them again. I think that is a natural competitive instinct, and I would hope that they have that, but that is not something that I dwell on at all.”

So how will the Buffs, many of whom are playing for their third head coach, turn the page after the program experienced four wins and 21 agonizing defeats during its first two years as a member of the Pac-12?

One practice at a time. Connor Wood, one of six players voted to serve as a team captain this fall, is coming off an impressive offseason and is the heavy favorite to win the starting quarterback job.

Paul Richardson, one of the Pac-12’s most dynamic wide receivers, returns to the huddle after missing the 2012 season with a knee injury. The redshirt junior should draw enough attention to allow Christian Powell, Tony Jones and Josh Ford to run downhill in MacIntyre’s version of the high scoring “pistol” offense.

“We have a lot of character,” Richardson said. “CU is not known for having a down football program, and that’s what people are failing to realize. We haven’t been very successful or been to a bowl game of late, but this is not what CU football is about and we’re going to prove that this fall.”

Defensively, the new coaching staff is pleased with the defensive line it inherits, led by Chidera Uzo-Diribe on the edge and Josh Tupou inside. Hard-hitting Derrick Webb leads the linebacking crew, and the secondary can only improve after Kenneth Crawley and Co. were thrown to the wolves last fall.

“I see some talent in areas. I’m not sure we have enough yet,” said veteran defensive coordinator Kent Baer, who also worked under MacIntyre at San Jose State. “We just have to learn to play together as a team to win on a consistent basis. It’s something we have to continue to stress. It doesn’t take talent to play hard and play physical. It’s a mindset, it’s an attitude, and winning helps that obviously.”

The confidence level inside the Dal Ward Athletic Center has improved dramatically since last November, an evolution that began during spring drills and carried through the summer.

Of course, there is optimism at every camp around the country. CU felt good about itself a year ago until losing a late lead and dropping the opener to Colorado State in the Rocky Mountain Showdown. A stunning home loss to Sacramento State followed. And the Buffs were outscored 466-124 in the other nine losses, scoring 35 of those points in the season finale against Utah on Nov. 23.

CU fans are hoping MacIntyre’s blueprint in the WAC — where San Jose State went from 1-12 to 11-2 during his three seasons — will work for the Buffs in the Pac-12.

“My first year as a head coach, I was trying to run around and put out every fire there was. When it’s your first time calling the shots, it’s a little difficult,” MacIntyre said. “So, I’m a lot better this time around I think than I was my first year [at San Jose State]. Also, our coaching staff was all brand new, now our coaching staff is all moving in the same direction.”

Mike Bohn, the CU athletic director who hired this generation’s “Coach Mac,” was asked to resign in May and replaced by Rick George, who will be under pressure to get the department out of a $20 million hole and raise the funds to complete the $170 million facilities project.

The national media expects the Buffs to finish last in the Pac-12 South Division again. The suffering fan base would like to see a more competitive team that provides some hope of winning big again in three or four years.

“I guess the public’s perception, if you read the magazines, is not very good,” MacIntyre said. “I tell the kids all the time to block out the noise. All we have to worry about is ourselves. Our guys that are putting their helmets on, we just have to worry about what we’re doing. We can’t listen to everything else all around. To really be a good team and a good leader sometimes you have to kind of put the blinders on and just keep going.

“People don’t think you can do it and then all of a sudden it happens.”

“I don’t know much about the last seven seasons. I just know what we’re going to do as a staff,” MacIntyre said. “I think one of the things that we will be able to do, we have to develop trust in our young men and they have to trust us, we have to trust them. We’re in the process of doing that now.”