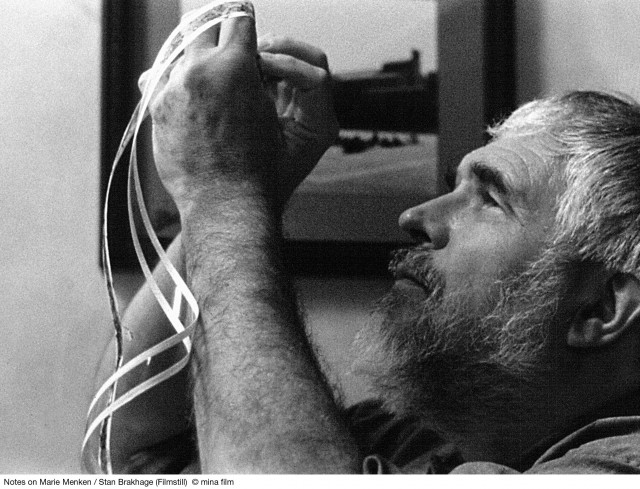 It all started with a walk. I had arrived in Boulder the night before for my film studies job interview, and my first official engagement, I was told, would be “breakfast with Brakhage.” I can’t say I slept too well. While I knew all about the legend — the shaggy-haired Dog Star Man of Rollinsville who had changed the course of cinema — I knew nothing about Stan Brakhage the man. I expected a grilling. I saw myself holding forth — while I dug into my chicken omelet — on the subtle delicacies of meat-ineffable. Or the profound mysteries of hypnagogic vision. Or the sublime ecstasies of hand-painted visual music. All integral to his cinema.

Instead we went for a long walk and found out that we had been friends all along. In later years, he would laugh and say, “It was love at first sight!” Apart from our passion for film and art, we discovered, during that walk, that we were both hard-core poetry buffs. Stan’s idols were Pound, Olson, Duncan, McClure, Zukovsky; mine were an eclectic bunch: Rilke, Tagore, Cavafy, Lorca, Vallejo. Over the years, many books would pass through our hands, but our most treasured gifts to each other were books of poems. When Stan died in 2003 in far-off Victoria Island, I read poetry out to him that night and, on the day of his memorial service at the University of Colorado, I read Cavafy’s “Voyage to Ithaka” — there was no better way to say goodbye.

As soon as I moved to Boulder, Stan asked me to join the tiny group which met every Sunday night in a classroom in what was then the Fine Arts Building. This was the Brakhage salon where we watched not only his films, but those by his friends and contemporaries.

My rite of passage was the mammoth four-and-a-half-hour epic, Art of Vision, Stan’s most ambitious work, which encompasses virtually every aspect of his experimentations with film. When the lights came on, the audience had dwindled to two.

“You stayed!” Stan exclaimed loudly, and I knew I had passed the test.

The salon shifted within a couple of years to a more homey setting — Stan’s apartment. We now watched films sitting on the living room floor, with the projector perched on the dining table, while his children played around the portable screen. It was a very happy time and I was, at first, a little sad when the salon moved back to CU to become a public event. For nearly 10 years, anybody could walk in on Sunday night to the visual feast Stan provided for free.

When I created the Stan Brakhage Film Series — Celebrating Stan in 2003, a few months after he passed away, I had no desire to reinvent the salon. Instead it was meant to be an homage to my dear friend and mentor, a way of saying thank you for all the years of blessedness, for the endless gift-giving in words and films, and for having simply been there for all of us. I was looking for a way to give shape to that feeling. So, for the last eight years, we’ve met on the first Sunday of each month during the semester to celebrate Stan. We watch his films, talk about them informally, and go home — I like to think — with a sense of having been touched by something infinitely greater than what we are or can comprehend. I do not announce the titles before each show — Stan hated the notion of formal programming — but I provide a list at the end of the screening. Showtime is 7:30 p.m. in ATLAS 100 on the CU campus. All are welcome.

This past summer I was invited by the Musee National d’Art Moderne — the Centre Pompidou — in Paris to curate and present three Brakhage programs. Every show was sold out, and the Q&As stretched well into the night. In the audience were Sorbonne students who were writing their M.A. and Ph.D. dissertations on Stan. It was all very profoundly moving. I couldn’t help but smile at the memory of our first walk — how it all started — and how I was, of course, still walking with Stan. The walk will never end.

Editor’s note: Suranjan Ganguly teaches film at the University of Colorado Boulder and is the founder and curator of the Stan Brakhage Film Series. Stan Brakhage taught film at CU for 22 years, retiring as a distinguished professor shortly before his death in 2003. He made more than 350 films, published 11 books on film and helped revolutionize cinema as an art form.

The Stan Brakhage Film Series — Celebrating Stan starts
on Sunday, Feb. 6 and runs on the first Sunday of every month until May
1. Screenings start at 7:30 p.m. Admission is free. Screenings are in
ATLAS 100 on CU campus.