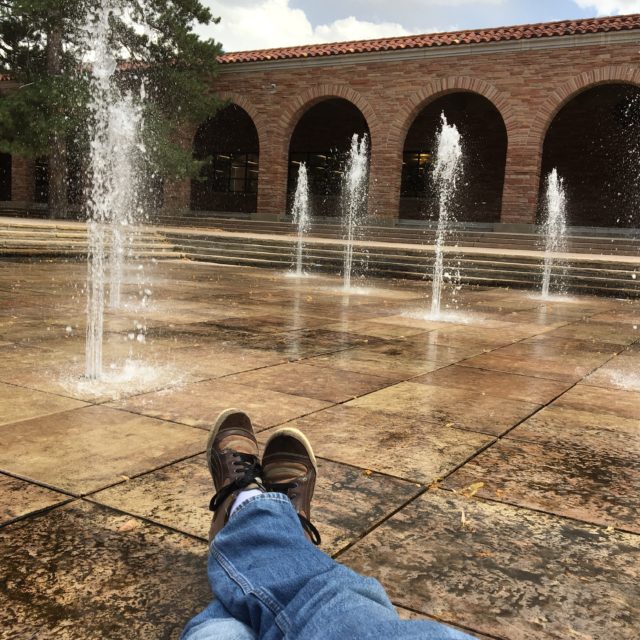 The name had just been announced as the 1957 Oscar winner for Best Original Story. No one rose.

Jesse Lasky Jr., vice president of the Screen Writers Guild, skittishly rushed onstage, accepted the award on Rich’s behalf, offering a half-hearted explanation; he’s in the hospital with his newborn? No one believed it. The mystery, the whispers lingered — who was Robert Rich?

Outside the University of Colorado Boulder’s University Memorial Center is a large colored-concrete square with 12 programmable jets. Throughout the day, water sprouts up to ten feet high in rhythmic patterns, mesmerizing anyone sitting on the steps leading into the fountain’s square or lounging in the vicinity. As the water descends, it drains through a subsurface mechanical system, recirculates and launches back upwards through the jets. There is no standing water; the fountain seems to be living, breathing.

“Every public event that I’ve seen on campus operated out of that fountain,” says Andrew Haubner, a 2016 CU Boulder graduate and former reporter for the CU Independent.

For the past four decades, that fountain, the Trumbo Fountain, has served as a focal point for demonstrations, protests and guests wishing to impart wisdom to students and others passing by. Whether it’s evangelical Christians, the Black Student Alliance or Mitt Romney supporters, the Trumbo Fountain is a place for anyone to stand and speak.

“It’s been the center heartbeat for any type of viewpoint, for anyone on campus,” says Haubner.

The plaque posted near the fountain memorializes Dalton Trumbo, a CU dropout (more on that later) and figure best known for his defiance of the U.S. Congress during the Cold War’s “Red Scare:”

Lifelong Advocate of the First Amendment

“Even now in 2016,” Haubner wrote in an article for the CU Independent, “Trumbo’s name inspires both admiration or aversion.”

Decades earlier, in 1924, Trumbo arrived at CU Boulder bent on studying journalism. He quickly jumped into writing for the Silver and Gold, the student newspaper of the time, the Daily Camera, and Dodo, a campus humor magazine. But the following year, when his family moved out to Los Angeles after his father lost his job in Grand Junction, Trumbo dropped out of school and joined them. His father died soon after, and Trumbo was forced to work the night shift at a bakery to support his mother and sisters.

To keep himself sane, he wrote. In the eight years toiling overnight in the bakery, Trumbo composed six unpublished novels, wrote for magazines and film critics, and eventually broke into a successful screenwriting career. In 1939 he published a novel, Johnny Got His Gun, which won the National Book Award; in 1940, he was nominated for best writing for a screenplay  for his adaptation of Kitty Foyle, and between 1943 and 1944, A Guy Named Joe and Thirty Seconds Over Tokyo were produced, steadily etching Trumbo’s name into Hollywood fame.

Around the same time, the Cold War brewed and heat from the “Red Scare” intensified. Senator Joseph McCarthy began marshalling investigations into the associations and personal beliefs of thousands of Americans spanning the country. Who, they demanded, were Communists?

The House Un-American Activities Committee specifically targeted the movie industry and prodded into the lives of produces, writers and actors alike. The U.S. Congress summoned hundreds to testify about their political affiliations and provide the names of others that may be associated with the Communist Party.

There was a deal offered: those who repented and supplied names of suspected communists were allowed to return to business as usual, but those who refused to address the committee were cited for contempt. Uncooperative artists were blacklisted from jobs in the entertainment industry, forced into professional and personal exile.

In 1947, Congress summoned Trumbo to testify in Washington.

At the 1957 Oscars, even critics were confused. By the end of the year, The Brave One, the film for which the mysterious Robert Rich was nominated, hadn’t even hit one million dollars at the box office, a scanty profit even at that time. As the book Controlling Hollywood: Censorship and Regulation in the Studio Era notes, “it seems unlikely that Academy screenwriters could have voted for a film that no one had seen, written by a person that no one knew.”

So grew another question: why did he even receive the nomination?

“Robert Rich remained unembodied. Who was he — a blacklisted Communist writer working under another name,” LIFE magazine speculated the month following the Oscars, “or just a name cribbed to adorn a cribbed plot?”

LIFE pointed a “finger of suspicion” at one of the prominent Hollywood screenwriters jailed in 1947 for refusing to testify about Communist connections and “being uncooperative,” unwavering in his determination to uphold the American standard of free expression and his first amendment right: could Dalton Trumbo be Robert Rich?

Trumbo was the most prominent member of the infamous “Hollywood 10,” a group of 10 film industry workers, mostly other screenwriters, who refused to testify in front of the House Un-American Activities Committee. Forgoing his promising career and Hollywood fame, and jeopardizing the livelihood of his young family, Trumbo stood his ground and refused to testify. For refusing to cooperate with the committee, Trumbo spent nearly a year in jail.

“Trumbo, a married father of three young children, paid for his act of conscience,” Eric Gershon reported for the Coloradan Alumni Magazine. “It derailed a flourishing, prosperous career, led to prison, prompted a two-year exile in Mexico and forced him into a black-market livelihood for more than a decade.”

Trumbo continued producing work, publishing under pseudonyms or under the names of other authors he knew who were still allowed to publish.

“It also helped make him a civil liberties icon and secured him an exalted place in the history of Hollywood and of Cold War America,” Gershon added.

Larry Ceplair, a scholar of the Hollywood blacklist era, during which hundreds of others in the film industry were fired or professionally exiled for their suspected political affiliations, told Gershon, “Trumbo has become a hero to many people.”

According to Gershon, Trumbo was “a pacifist and underdog champion” who joined, and left, the Communist Party twice. These decisions “reflected a general affinity for leftist causes and solidarity with close friends who were party members but not supporters of the Soviet Union.”

Trumbo said his party membership “was not a matter of great consequence. It represented no significant change in my thought or life,” according to Ceplair, author of Trumbo’s biography, Dalton Trumbo: Blacklisted Hollywood Radical.

“Yes, Dalton Trumbo was a Communist,” explained his daughter Nikola Trumbo to the CU Independent. “He believed that he had every right to be a Communist if he wanted to be and in fact, he did.”

“It was the issue of principle and the cost of standing by those principles,” Lewis Cardinal, a student who in the early ’90s fought to dedicate the previously unnamed Trumbo Fountain to the Hollywood hero, explained. “As Americans, that is not only a very American idea, but a very Western and democratic principle that you fight for throughout all democracies.”

In 1992, CU Boulder graduate student Kristina Baumli and Lewis Cardinal teamed together to petition the university to name the fountain in Trumbo’s honor. Baumli had recently read Trumbo’s biography and was astounded that he wasn’t memorialized anywhere on campus. Trumbo, who had passed away in 1975, was, in her eyes, an important fixture of American free speech.

Other students got on board with the dedication proposal, and together they rallied support from Trumbo’s family and the living members of the Hollywood 10 and proposed Trumbo’s name dedication to the CU Board of Regents.

Almost exactly 50 years after Trumbo stood defiantly in court, and after more than a year of lobbying, Trumbo’s family and friends gathered around CU Boulder’s University Memorial Court and officially dedicated the fountain to Dalton Trumbo, solidifying its stature as a haven for free expression and informed debate.

What about Robert Rich and The Brave One?

“I’ll neither deny nor confirm that I wrote it,” Trumbo responded directly to LIFE’s speculation. “In that way I’m able to steal part of the credit for practically every good picture made.”

The spreading rumors about Trumbo, and other blacklisted artists working under false names, mounted pressure on the industry to subvert the blacklist. Some suspected that the reason for The Brave One’s nomination was to bubble the blacklisting to the public’s surface, call it into review and question the veracity of its effect.

Eventually Trumbo was openly given credit for The Brave One, and his other cinema hits Spartacus and Exodus.

After more than a decade being banned, the Hollywood 10’s point had been made: it wasn’t about money or anti-American politics or the Cold War. They were about preserving the integrity of American freedom, the American spirit.

Now, 23 years after its dedication, the fountain maintains the essence of Trumbo’s legacy. As the water spouts and falls without pause, the continuity is a reminder of what the Hollywood 10 endured. They fought for the right of free expression, the right to maintain one’s personal beliefs, no matter if they deviate from social norms or are widely frowned upon.

The Trumbo Fountain stands as a focal point of CU Boulder, as a promise to those wishing and willing to express themselves: all views are not only welcome, but encouraged. Don’t be silent, contribute to debates. Stand by the fountain, rise and speak, without pause.