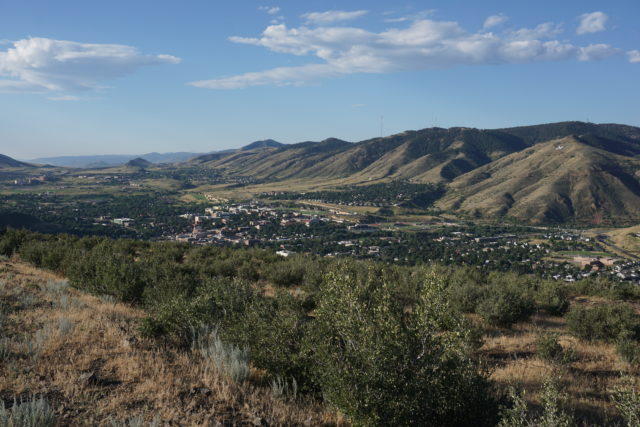 Originally founded in 1859 — one year after Boulder was settled — Golden was first a mining camp along Clear Creek, then the capital of the Colorado territory before being ousted by Denver when Colorado became a state in 1876. Now the city is synonymous with the world’s largest single-site brewery, Coors, the Colorado School of Mines, and all the appeal of a mountain town without the drag of a four-hour drive. And, unlike some Front Range cities, the kind that blend endlessly into each other, Golden has a true and immediately recognizable identity. Those who live and work here are proud of that, and you’ll find cheeky, “Don’t Boulder my Golden” stickers plastered around town. Here, you are a tourist. Enjoy.

BREAKFAST: Bonfire Burritos delivers arguably one of the best breakfast burritos you’ll find in the Centennial State. Formerly owned and operated by a woman, Cecilia, whose green chili was a thing of legend, Bonfire is run by four friends from Golden High School who bought the burrito trailer when Cecilia hung up her apron in 2013. As the story goes, they ate at Bonfire daily and credited their success to Cecilia’s green chili. Now they are continuing the tradition. Stop by for the Classic — green chili, scrambled eggs, hash browns and choice of meat — and wait for success to manifest.
The original Bonfire trailer is at 17025 S. Golden Road, but look for their new brick-and-mortar sit-down on Ford St. to open later this year. bonfireburritos.com

MORNING ACTIVITY: Before the sun gets too high and the temperature too hot, head up to North Table Mountain Park West. Get there early enough, and you’ll find plenty of parking at the trailhead. It’s more a steep stroll than a hike, but the view isn’t one you want to miss.
4788 CO-93, cityofgolden.net/play/recreation–attractions/trails/north-table-mountain-trail/

MORNING ATTRACTION: Home to over 100 trains — some in operation, some for show — the Colorado Railroad Museum is a transportation playground. Climb aboard the dining cars of yesteryear, check out snowblower-equipped engines and ride the rails in a steam-powered locomotive. There are also miniature train sets — check out the one in the basement — a massive on-site archive and an audio tour of the grounds.
17155 W. 44th Ave. coloradorailroadmuseum.org

LUNCH: Locally owned and operated, Bob’s Atomic Burger is the longtime dream of Robert J. Toohill and has quickly become a Golden staple. Like a lot of Golden, Bob’s has an unfussy mid-century vibe. Wash your burger — or chicken sandwiches, if you like — down with a milkshake and order a side of fried onion petals.
1310 Ford St. bobsatomicburgers.com

AFTERNOON ATTRACTION: No trip to Golden is complete without a Coors Brewery tour. They’ve been brewing here since 1873, and the 30-minute audio tour takes you through the cultural history of the brewery, the production facility and ends with a trip to the tasting room. Tickets are $5 for Colorado residents, and the shuttle departs from the parking lot on Ford St., just across the street from Bob’s Atomic Burger.
Ford & 13th St. millercoors.com/breweries/coors-brewing-company/tours

DINNER: Woody’s Wood Fired Pizza has an extensive menu, but don’t bother. Order the full pizza and salad bar and go wild. They have every kind of pizza you want, and if they don’t, ask, and they’ll whip one up. The salad bar is of the fully loaded variety, and there’s beer cheese soup to boot. Oh, and that bottle of honey on the table is for your crust.
1305 Washington Ave. woodysgolden.com

DESSERT: If the honey crust wasn’t enough, satiate your sweet tooth at Golden Sweets. Dipped chocolates, novelties and ice cream. They have over two-dozen flavors and plenty of rotators. Overwhelmed? Go for a scoop of Pralines & Cream.
1299 Washington Ave. #100 golden-sweets.com