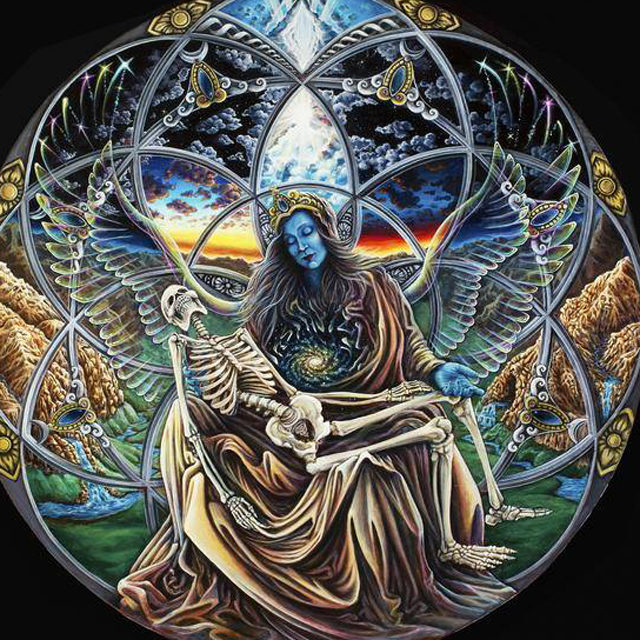 Visionary art is a maze of sacred shapes and images mapped by an artist in order to reveal a divine and spiritual language. The paintings can emerge from spontaneous bursts of creative energy with little-to-no conceptual idea beforehand — that uninhibitedness is part of what makes visionary art special. For those not familiar with this form, it’s easy to get acquainted, especially here in Boulder. Think of the spiraling, colorful geometric vistas you might find in an art gallery or at a festival. Today, visionary art is reaching a wider audience, and some of the best artists of the genre are living right here in Boulder. Take Randall Roberts and Morgan Mandala for example.

The two are taking visionary art to a new level with their collaborations and have made Boulder their home because it’s a community that nurtures their craft. Their paintings explode with visions from an unseen world, ones they hope provide reflections of expansive consciousness. The art is detailed and daring, a mirror held up to the inner self.

“Art never failed me,” Mandala, who grew up in Chicago but attended college in Fort Collins, says. “As far as there being something that I did to kind of express myself as a young teenager, [art] was something that I’ve always gotten lost in. I wanted to come out here to be by the mountains to have a more natural environment, as opposed to a concrete world of consumption and very little connection.”

Struggling with the idea of “making it” as an artist, Mandala considered veterinary school, but in the end realized she had to follow her passion for art — not just any art, divine art. It’s been the central theme of her work as she’s explored and re-created mythical gods and goddesses through her creative eye.

“My painting ‘Trinity’ is my baby and probably one of my favorites,” she says, “I wanted to merge these archetypes of the divine mother and all these different cultures.”

Roberts, who grew up in Hudson Valley, New York, also dreamed of becoming an artist in his youth.

“I enjoyed drawing my whole life, and I was into Dungeons and Dragons and video games and stuff. I really wanted to be a designer for video game monsters. … When I was 29, I made my first painting and it took over my life, and I abandoned all the ideas for, you know, getting a real job with the art and just became a painter,” Roberts says.

It was when he met famous artists Alex and Allyson Grey at the Omega Institute, an educational retreat in the Hudson Valley, that he first discovered visionary art. He then quit his job, burned his 401K and pursued his dreams of being an artist.

In 2007, his painting “Portrait of Alan Watts” put him in the canon of visionary art.

“I wanted people to know about [Alan Watts], so I made a painting of him and then YouTube had a couple of his speeches and then it started popping up online, and I realized that other people I don’t know were into this,” Roberts says. Following the Alan Watts wave was the painting “Portrait of Homer Simpson,” which Roberts says ended up becoming a popular piece of “blotter” art onto which liquid LSD is dropped.

When Roberts met Mandala a few years later, it was clear they had the same purpose in creating visionary art.

“I met her at Rootwire Festival. It’s [progressive space rock band] Papadosio’s party. It was back then anyway. They were one of the first festivals to invite multiple painters as part of their festival, and we met there and shortly after fell for each other pretty hard,” Roberts says.

Not long after, Roberts made the move to Boulder and the two started working together. In 2013, they created their first collaborative painting, “Symbiosis.”

“Both of us have painted with other painters before, and it was so fun and easy to work together and we didn’t have to think too much about it. We both kind of got to explore a new style with each other in a way that was less serious than our individual work and could work faster because there was two of us,” Mandala says.

The two spend months out of the year traveling to different festivals, participating in live paintings so people have a chance to witness the magic of their creations firsthand. Much of their work takes place on the road, but when they aren’t traveling, they’re hanging out with their cat, Moo, at their home/art studio.

“[The scene in Boulder,] it’s just popping right now,” Roberts says. “I think the scene is the strongest in the country that I can think of for the particular kind of art we make.”