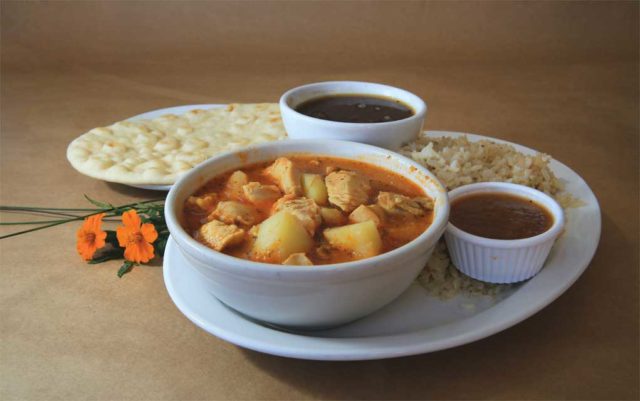 You may think you know Dot’s Diner. You go for a big, delicious, no-nonsense breakfast, delivered in busy environs, where the coffee and chai are always hot.

But unless you’re a regular, you may be surprised to find a full menu of Nepali food on the menu of what some might mistake as a bacon-and-eggs-only joint.

The story of Dot’s — now in its fifth decade — and how it wove Nepali food into its menu is rooted in a confluence of three Boulder institutions: Nancy’s, Dot’s Diner and Mother’s Cafe. Dot was Nancy’s mom, and they each had their own restaurant, while Mother’s had the killer green chile.

The renaissance of what had become a breakfast backwater began in the mid-1980s, when a young dishwasher at Nancy’s named Peter Underhill began working his way further into the kitchen. After seven years, Underhill had become an integral piece of the Nancy’s machine, and cooked for the likes of Robert Redford, James Taylor and his personal favorite, Timothy Leary.

Then came an opportunity to work at Dot’s, which was languishing at the time, with the understanding that if Underhill could figure out how to make Dot’s profitable, he’d buy it from Nancy.

“Nancy’s was this big deal, and Dot’s was just a hole in the wall,” Underhill says. “I had learned to cook at Nancy’s, and when I went to Dot’s to cook, I was better than the cooks there. They were just slapping things on plates. The quality went up immediately, because of what I learned from Nancy’s.”

He brought more than experience. He had the recipes from Nancy’s, which has since closed. “Nancy’s hollandaise sauce was one of the big things she was known for. Now we have the best hollandaise in town.”

He also kept Nancy’s biscuit recipe for drop biscuits: golden carb-nuggets with steaming insides riddled with pockets of liquid fat — a biscuit so extraordinary and renowned that Bon Appetit came calling for the secret.

Then, Underhill bought Mother’s Café, on the hill, in part for its green chile recipe, he says. Then came the old man from Nepal.

“In 2000, someone had an uncle that needed a job,” Underhill recounts. The Gurung ethnic group, in central Nepal, numbers less than 300,000. This man couldn’t speak Nepali, the Indo-European official language of Nepal, only Gurung, which is closer to Tibetan. But the man could wash dishes.

“Just a fantastic worker,” Underhill says. “Then he had a friend, another old Gurung, who also wanted to wash dishes. [So] I got a trained Gurung cook, a decorated, talented chef who was tired of making Indian food, because most Nepali chefs end up working in Indian restaurants, and he just wanted to make breakfast.”

This cook, Peu Gurung, would make lunch for the Nepali staff. “Those old men didn’t want bacon or eggs or omelets,” Underhill says. And the fragrance of the Gurung curries they made instead wafted into the dining room. “People could smell it from the restaurant and they wanted it,” Underhill says. “Peu offered to make it, so we put it on the menu.”

The curries come with rice, dal, jalapeno chutney and flatbread. Chicken curry and saag tofu are the two most popular dishes these days, Underhill says. “People will sometimes order them mixed to make chicken saag.”

After eight years, Peu got his citizenship, and then he and his wife bought Dot’s on the Hill, in the space once occupied by Mother’s Café. Underhill, meanwhile, runs the show at the 28th Street location.

It seems fitting that the Nepalese have found such a hospitable welcome in the mountains of Colorado. And perhaps that cuisine, like a good green chile, is at its best in the thin air of the high country.

But one thing is clear: At a time when many venerable Boulder establishments are going under, Underhill has kept Dot’s afloat by recognizing a good thing when he sees it, and his line of curries is no exception. It has become woven into the braids of Dot’s evolving menu.

“It’s gotten to the point where I can’t take curry off the menu,” Underhill says. “I’d lose business.”