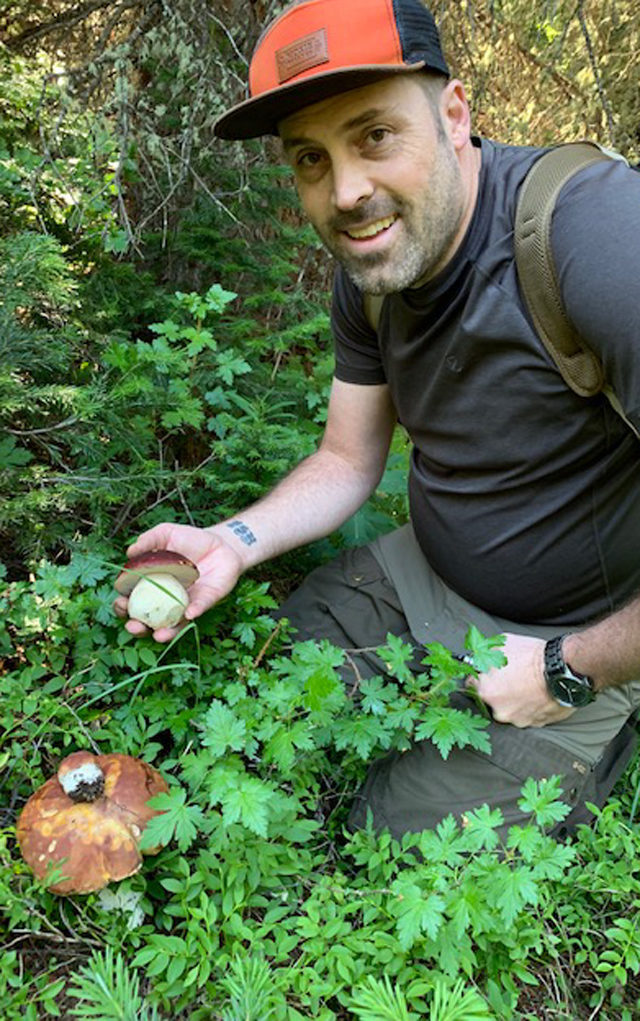 Tammy Mencher and Matt Solano have the road into the mountains mostly to themselves on the cherished weekday mornings in July and August when they get away to forage — trips they look forward to all year.

Still groggy from their day jobs as chefs in busy kitchens, Mencher and Solano fuel up with coffee on the short drive to one of many possible foraging locations in Boulder and Gilpin counties. The site changes based on the day’s conditions and what they’re trying to find, which is the foragers’ polite way of saying it’s impolite to ask about favorite spots, just as avid anglers answer with a wink when you ask where the fish are biting. Sometimes with their son in tow, the couple seeks areas based on altitude, which on this trip meant hiking up to 11,000 and 12,000 feet in elevation hunting for porcini mushrooms — as well as something more spiritual.

“A lot of people go up hiking and it’s for recreation or to get healthy or get the kids to run out some energy,” says Mencher, the assistant dual restaurant manager for the Hilton hotels on Canyon Boulevard. “They’re seeing what’s at a far distance. They’re seeing the pretty clouds. They’re seeing the giant trees and the stones. They’re not looking at the finer details.”

Foragers, on the other hand, usually enjoy looking down and going deep, thereby witnessing a (often delicious) microworld that most of us fail to notice.

“At the trailhead, we discovered some strawberry plants along the side of the road that literally everybody is passing up,” says Solano, a kitchen manager at Mojo Taqueria in Lyons. “As soon as we knelt down and started picking them, a couple people got interested in what we were doing, and it [became] a moment to educate someone. We had already eaten quite a bit of our fill, so we handed them on over.”

Strawberries bought at the grocery store, he says, have no flavor in comparison to their wild counterparts.

“They’re over-inflated and literally taste like nothing,” Solano says. “When you taste that mountain strawberry for the first time in your life, you’re blown away by the explosion of flavor.”

Berries are certainly among the most sought-after edibles that grow in Colorado — one almost all foragers, their tongues berry-stained before they leave the fields, admit never make it home. Other local edible plants include greens like watercress, lamb’s quarters and purslane; herbs such as wild mint and parsley; and the dandelion, whose parts have multiple uses.

Such finds are nutritious and delicious bonuses for many foragers, though. During the prime season of July and August, the target is usually mushrooms, in Boulder County and nearby, notably the puffball, hawk’s wing, chanterelle, morel and porcini varieties.

If you’ve ever eaten one of the latter three, you know those are flavorful, in-demand mushrooms. What you might not know is that you have a forager rather than a farmer to thank. All three are part of a group of mushrooms so symbiotically connected to the forest that they cannot be cultivated. Every such mushroom that’s passed your lips was born wild.

“No one can reproduce a porcini,” says chef Kyle Mendenhall, who has led the kitchens of many notable Boulder restaurants before becoming culinary guidance counselor at the Big Red F Restaurant Group. “I love the simple fact that no one has to put energy into producing these things. They just happen as part of the cycle of nature. Well, that, and the simple fact that they’re the most amazing flavor you can get.”

Mendenhall has been a forager since shortly after he moved to Boulder to study music, his first career. A local violinist and family friend introduced him to the practice. Solano, on the other hand, grew up harvesting prickly pears with the Native American side of his family, but didn’t truly connect wild foods to his work as a chef until adulthood, when he was working at an upscale steakhouse in Florida.

“A chef walked over and set a whole box of morels on the prep table to clean,” Solano says. When Solano asked where the delivery had come from, the chef said his buddy foraged them. “This was a four-star restaurant, internationally known, where celebrities eat on a daily basis, and I’m thinking, ‘Wow, that’s cool. You’re bringing foraged food here. We sell caviar, we have a live lobster tank, and you’re bringing foraged foods here.’ There were easily 40 pounds.”

Some folks hear that story and wonder if the buddy was paid. He was. Though figures are impossible to verify — the polite caginess of the community again — fresh morels can be sold for $50-$60 per pound. Matsutakes, the rarest, can sell for $100 per pound, making wild mushrooms big business. An entire informal economy of mushrooms operates mostly out of the public’s awareness.

Other folks hear that story and wonder how the restaurant could trust the mushrooms were morels. After all, “buddies” aren’t rated by the Better Business Bureau, and mushrooms can be dangerous. Once the idea is in the public’s awareness, foraging can easily be painted as an issue worthy of panic.

Thankfully, there are some guidelines, as Mendenhall explains.

“Strictly legally speaking, anything we receive that’s foraged must [come from] an individual in the world of mycology,” he says, referring to the study of fungi. “They are either a certified mycologist themselves or they have a letter that’s been written on their behalf by a certified mycologist. You also show two years worth of invoices and a few other things. That’s Colorado and Boulder County food code.”

That documentation of skill includes which mushrooms the forager has successfully identified on multiple occasions. And that typical wink-wink non-answer is about all the detail you’ll get from most restaurant kitchens, who protect the identity of their suppliers.

“Chefs will say they got them from a forager but they won’t say who,” Mencher says. “A lot of foragers do this specifically to make money, and if their identity or spots get out, they’ll eventually start losing their stock and then their job is gone.”

Such individuals usually work in relatively small quantities, however. For instance, 40 pounds would last one day, perhaps two, in a busy restaurant. Yet larger quantities exist, as evidenced by the fresh and dried wild mushrooms available at the grocery store.

“There’s a handful of companies that deal in these specialty foods,” Mendenhall says, “and they sometimes have small, careful armies of people out in remote places who are gathering these items like morels, chanterelles and matsutake.”

Such care and the rarity of the mushrooms themselves make such companies’ products expensive, meaning it takes an investment from a restaurant to offer fresh wild mushrooms on the menu. Perhaps toast to both forager and chef next time you order a plate of the porcini risotto or the wild-mushroom soup in respect for that extra effort.

However, most foragers in Colorado hunt only for themselves, their family and friends, and are committed to safety when it comes to wild edibles.

“Of all the hundreds and thousands of varieties of mushrooms out there, I only feed a handful to my children,” says Mendenhall. Those species are mushrooms he can identify with complete confidence and are tasty enough to be worth the effort. In fact, flavor might open the door to foraging, but the practice offers a host of other benefits.

“It’s just as good when I don’t find anything,” admits Mendenhall. “[Foraging trips] have a lot to do with taking a break to collect my thoughts and realizing that life continues on despite my busy schedule. Things are growing and life is happening despite me and what’s happening in my own bubble.”

Utilizing resources that are free to everyone can also be seen as a radical act of empowerment, if on a small scale. Solano, for instance, dreams of someday opening an indigenous-inspired restaurant, saying, “I want to be able to promote wild foods and taking control of food yourself.”

Wild mushrooms do seem to bring out wilder thinkers, people who like to zoom in close for a different perspective both in the forest and in their lives. They cherish and protect their passion, and are often folks who don’t work a 9-to-5, who use foraging to de-stress or even as a form of meditation. The food draws us to the wilderness, and foraging can be a way to reconnect with either the self or something larger.

“You’re just as much wildlife as anything else, after all,” says Solano. “We can’t, as humans, separate ourselves from that. We’re mammals, we evolved right here and ate these things as we were evolving. And they’re literally there for the taking.”

Not all mushrooms are edible, and in fact, many are dangerous or even deadly. Before you pick or eat any plant:

• Identify the edible. Use more than one source to name the plant or fungus and its edibility. Preferably, more than one person should agree on the identification. If flavor is a factor, make sure the food is not only edible but tasty enough to be worth the effort.

• Bring it home. Unless you’re an expert or have documented success at identifying the exact species — and even if so — consuming edibles on the spot is careless and dangerous. Boulder County recommends contacting the Boulder Mycological Society (cmsweb.org) if you have questions about your mushrooms.

• Build knowledge slowly. Rather than operating on the default setting that any flora could be edible, forage from a place of humility, building your identification skills from zero species to one, then two. Empty hands are not a signal of failure but of respect for the wild.

• Be vigilant. Colorado hiking and mountaineering always comes with risk, which can be countered by being aware of and prepared for weather, challenging terrain, wildlife of all sizes, and scrapes and bruises.

• Leave no trace. Follow all the rules of the trail, including packing out your waste, but also disturb the environment as little as possible as you forage. Return the land to its original condition so the edibles can continue to flourish, and take only what you need. Consider taking only pictures.

• Or don’t forage. If any of these cautions is beyond your skill or simply not your idea of a good time, choose not to forage and instead support restaurants and suppliers who work hard to responsibly supply these rare foods.