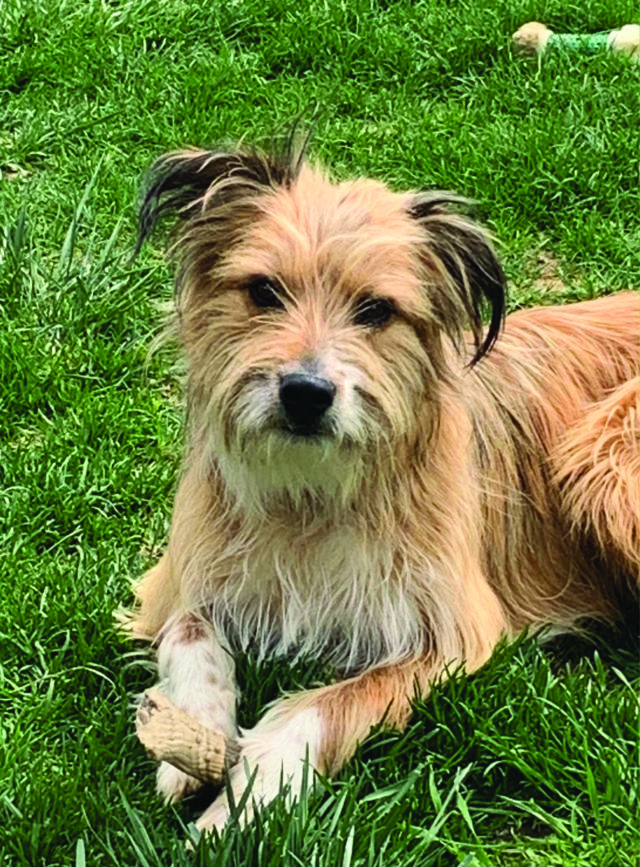 Every day, the dogs at Donelle Slater’s Superior-based kennel, Dog Tag, take naps between 11 a.m. and 2 p.m. December 30 was no different. She was pouring over paperwork in her home office, while the 41 dogs she was boarding for the holidays rested peacefully. It was a quiet—albeit windy—Thursday.

Then, around 12:05 p.m. she heard screaming. It was her husband, Jay, and he was sprinting across the yard, frantically pointing west toward the open space beside their property. For a second Donelle couldn’t make out his words, but when she did her blood ran cold.

The next 15 minutes she describes as the scariest of her life.

Time was not on their side though. By the time they’d pulled the trailer around, their barn was already completely engulfed in flames. Embers were flying through the air, singeing their clothing, burning their eyes, as they scrambled to initiate “plan B.”

They loaded twelve dogs into Donelle’s sedan (a Saint Bernard riding shotgun beside her), another six dogs into Jay’s car, and six more into their daughter’s. Amid the hurry and confusion, though, the Slater’s own dog, a rescue named Higgins, got away. As Jay was running to the car, dogs under both arms, Higgins flailed, fumbled and hit the ground running—Higgins escaped, and Jay didn’t have time to chase after him.

“By the time they were pulling out of the driveway, the detached garage for the dog kennel had started on fire,” Donelle recalls. “I went back into the kennel and I let out the last remaining dogs. There were 14 left.”

Originally she’d thought maybe those dogs would be safe in the outdoor holding area, covered in gravel and enclosed with a mostly metal fence. Perhaps with a water spigot running they’d be OK, she thought frantically. Then she saw that the fence itself was on fire and knew it was a lost cause.

“Every plan has a plan Z, right?” Donelle says. She’s spent her life working with animals, at zoos and aquariums, and she knew what to do when there were no options left.

“You open the gates and let everybody go. Because they will miraculously find safety . . . you just have to trust that they will do the right thing.”

So that’s exactly what she did. She opened the kennel gates and let the dogs out. She then jumped into her own car and sped off, as fire was swallowing her neighborhood, smoke blotting out the sun, embers in the air and dogs sprinting wildly down the street beside and behind her car.

“It was just awful,” she says. “The last thing I saw was my barn on fire and that garage on fire. I [had] no reason to believe that the house or the kennel would still be standing when I got back.”

It wouldn’t be until later that day Donelle would learn Higgins, her dog, hadn’t made it into one of the escape vehicles. Every other dog had made it safely out of Dog Tag and had been reunited with their owners.

“About a quarter mile from our house was another brick house that was not on fire. So [Higgins went there] and these guys got him into a car.”

They contacted Donelle, who had an employee who was willing to go pick him up and care for Higgins while the Slaters figured out what to do with themselves.

“So he was safe for about a day and a half,” Donelle says. “And once my husband and I got our housing situated, I said, ‘I really want Higgins back.’”

Her employee lived in Boulder and agreed to hand Higgins off to yet another person, who would then drive the lost dog straight to Donelle and Jay. However, Higgins was still shaken up. And during the second handoff Higgins freaked out, leapt out of the car window, leash attached, sprinting off yet again.

“So now he was [lost] in Boulder,” Donelle says.

They immediately began searching for him. They looked all day on Saturday, walking the creek path and shouting Higgins’ name, to no avail. The sun set and they went to bed for the second night without their dog. It was cold that snowy Saturday, and Higgins was out there somewhere.

The next morning, Donelle’s employee, plagued by guilt for botching the handoff, decided to plaster the city in flyers—which you may have seen.

“Please find Higgins” the poster reads, featuring a picture of the pooch and Donelle’s number.

That was when they started getting some real tips. Someone had seen paw prints in the snow by the university, so they went and followed them. Then someone called who’d just seen a leashed dog that looked like a fox, sprinting past Pasta Jay’s on Pearl, so they sped across town.

“Finally a good Samaritan picked him up at 19th and Floral (Drive) and brought him to the Humane Society,” she says. They scanned Higgins, got his info and called Donelle, who was there as fast as she could.

“Oh, it was tears and laughter. It was just such pure joy,” she says of the moment she was reunited with Higgins. “It was just a miracle. I didn’t think we’d ever see him again.”

Higgins was covered in burs, and his front right paw was pretty badly burned. But he’d survived. He’d made it home. And Donelle says that’s largely thanks to her friends and the community of Boulder.

“We have a really great community of people around us and they have been so supportive,” she says. “Community is everything, really . . . don’t take it for granted.”

When the Slaters returned to their home, they were surprised to find that their residence and the kennel had somehow survived (though both were badly damaged by smoke). They were lucky, Donelle says. Reopening their business was just going to be a matter of rebuilding parts of it.

Which won’t be so bad, Donelle says. Not with such a supportive community, their family and friends, and their dog Higgens all at their side.