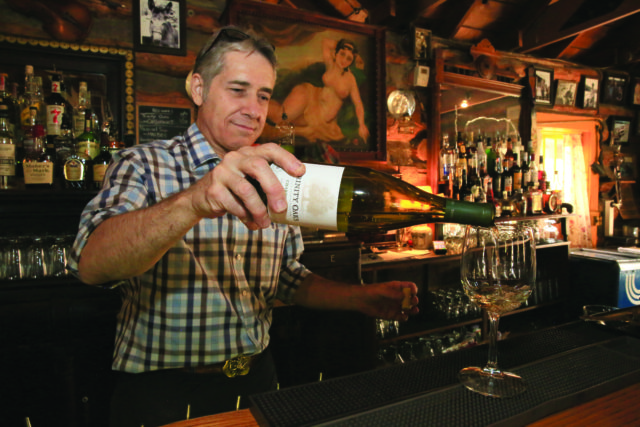 There is a point on the ascent to Gold Hill where the pavement turns to dust and you leave Boulder’s citified bubble in the rear-view mirror. The guardrails next to the sheer drop-offs become sparse and the sunset light catches the quaking aspen and a tumbling creek. You see more animals than people along with the evidence of weather, fires, mining and insects on the rugged landscape.

It’s only 10 miles from the mouth of Sunshine Canyon at Mapleton Avenue to the dining room at the Gold Hill Inn, but the trip takes you back 100 years or more. You come around that final curve and spy the mini-town of 200 or so souls founded during a gold rush in 1859. Perched on the side of a hill, the community boasts impressive views, a pretty little elementary school, a cool general store/cafe/pub, and, above all, peace and quiet.

Park on the dirt main street and start walking — you’ll feel the heady impact of the 8,300-foot elevation. You’re not in Kansas (or flatland Colorado) anymore and you feel, well, famished as you enter the historic log structure.

You are greeted by a warm, woodsy interior bookended by huge stone fireplaces focused around an ornate old wooden bar straight out of a Hollywood Western. However, this is no gold-mining themed eatery. Please resist the urge to walk or talk like John Wayne and order something straight up instead of your usual cocktail.

Most folks are here for the evening, not a quick bite, and the restaurant has served multiple generations of the same families over the decades. There are regulars who come once a month, worldly tourists who crave a once-in-a-lifetime experience, and occasional celebrities ranging from Colorado governors to actor William Shatner.

“The best was Betty White,” says Brain Finn, who co-owns the spot with his brother, Chris. “She was here for an animal rights’ benefit event. She walked right up to the bar and said ‘Hi! My name is Betty White and I need a Scotch on the rocks!’ She was great with everyone.”

The servers in a place this remote are like regulars. Brian Finn notes that the great-grandsons of some of the first folks who ate at the Gold Hill Inn are now working here. Gold Hill Inn’s baker has been producing breads and desserts for 17 years.

That’s remarkable in Boulder County, where eateries come and go with the seasons. For 56 years, locals and visitors have headed westward for dinner at the Gold Hill Inn, which isn’t even open all year. Finn’s parents, Frank and Barbara, opened the establishment in 1962.

“People are happy when they get here. They relax. There’s no urban angst,” Finn says.

There are some modern necessities the Gold Hill Inn doesn’t have. It’s not off the grid, but it’s certainly close. You can’t find tonight’s menu for its multi-course meals on the website nor book online reservations. You have to call the landline. Gold Hill’s poor-to-nonexistent cell phone reception means diners stay focused on friends and family at the table. Ridesharing services like Lyft and Uber don’t really work here.

If you think the rest of place is rustic, check out the restrooms; don’t worry, they are not outhouses. The working antique toilet has an overhead tank with a pull chain like the one in that famous scene from The Godfather.

The Gold Hill Inn also doesn’t have a dress code or hand-out menus when you sit on mismatched old chairs in the rustic dining room. The night’s offerings are detailed on the big chalkboard at the entrance, along with five or more reasonably priced wines by the glass. There is no à la carte option.

“Our mom wanted to serve full six-course meals for guests, and we’ve continued that,” says Chris Finn, who does a lot of the cooking.

The non-fussy meals start with appetizers such as avocado stuffed with smoked fish or a simple cucumber boat with herb cheese served with freshly housemade bread and jam. The Finns’ classic soups range from hot cream of peanut and hot and sour duck soup to cool choices such as raspberry borscht and creamy vichyssoise. Salads of veggies over lettuce are dressed with plum vinaigrette, Casey’s bleu cheese or house Caesar.

Chris Finn says that the menu always includes a choice of four to six entrees, sometimes a few more.

“Half of the orders are for bacon-wrapped beef tournedos with hunter sauce — it’s been on the menu forever,” he says.

There are usually five desserts ranging from sour cream apple pie to chocolate torte and coffee. Only ofter that does the six-course dinner conclude with bites from a tray filled with smoked Gouda, aged Cheddar and blue cheeses along with fresh fruit and Melba toast.

“We’re a dinosaur really, but we’re still at it,” Brian Finn says.

The place is far from extinct with seating for Sunday dinners often sold out.

On nights when a band is playing in the bar, a younger crowd fills the place and discovers what their previous generations of seekers knew: The Gold Hill Inn is cool. The Gold Hill Inn bar room has become a quintessentially Colorado concert venue.

“Seeing a show here is like having it take place in your living room,” Brian Finn says.

The area outside the restrooms are papered with signed photos from the many notable bluegrass, blues and Americana bands and singer-songwriters who have performed here including John Hartford, Maria Muldaur, Peter Rowan, The Dillards, Guy Clark, Robert Earl Keen, Doug Kershaw and Kinky Friedman.

The famous concert cookouts on Memorial Day, the Fourth of July and Labor Day in the Inn’s backyard are a practical solution to a problem.

“We started that because we didn’t want to spend all the holidays in here,” Brian Finn says, as he and Chris sit inside the restaurant to chat.

The Gold Hill Inn also hosts Murder Mystery nights next door at the Bluebird Lodge through October. The popular gatherings include a Champagne reception, three-course meal, and solving the mystery over dessert. Guests can stay over in one of the Lodge’s nine sleeping rooms.

Diners step outside into a chill, star-filled night scented with wood-smoke from nearby woodstoves and fireplaces. Where the road is often shared with bicyclists on the way to dinner, Sunshine Canyon is usually free and quiet for a slow digestive, 3,000-foot descent to Boulder.

Beginning in November, the Gold Hill Inn is only open on weekends, except for the big Thanksgiving Day feed and a lively annual party that literally closes the place down on New Year’s Eve. In May they return to awaken the Gold Hill Inn and start the 57th season of dining.