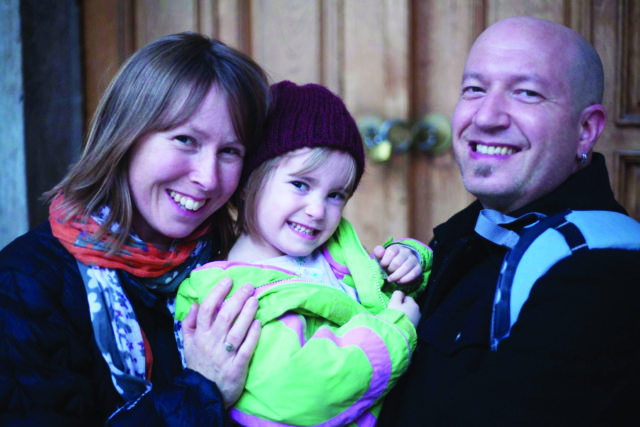 H.B. Woodsongs was the setting for much of Sondra Blanchard and Shawn Cupolo’s story as a couple: They met at the music store more than a decade ago, while Cupolo was working there and Blanchard was posting flyers for an event.

“We’re both from the East Coast,” Blanchard says of her connection with Cupolo. “And Shawn just had a really soft, gentle, playful way about him.”

The couple welcomed a daughter in 2010, and went on to purchase Woodsongs in 2017.

The two were well known in Boulder’s creative community: Cupolo had worked at Woodsongs for 14 years when he and Blanchard bought the business, and in his off-hours he played guitar in the blues band Hotfoot; Blanchard has been delighting audiences with puppets, masks and clown work as the artistic director of Lafayette’s Public Works Theatre Company since 2014.

Woodsongs has been a go-to for musicians since its foundation in 1971, including Colorado-based acts like String Cheese Incident, Yonder Mountain String Band, Leftover Salmon, Hot Rize, Elephant Revival and Gregory Alan Isakov. Steve Earle, Béla Fleck and Mike Nesmith of The Monkees have also patronized the store over the years.

Blanchard says Jared Polis dropped in several times, most recently in 2020 on the first day the store was able to reopen to the public after stay-at-home orders were lifted; he bought his daughter a clarinet.

“Shawn really appreciated whatever way people came to music,” Blanchard says. “He really enjoyed young people in the rental program that we had at the store, and also the ‘petting zoos’ that we did, where we’d put instruments into the hands of really young kids for the first time, and it would be so noisy and raucous and, like, aurally challenging, but he loved it.”

Blanchard says that Cupolo, whose father was a school music teacher, had just launched a donation program through Woodsongs to contribute money to schools in the Boulder Valley School District to help purchase necessary supplies.

But in the fall of last year, Cupolo began to experience fatigue and pain. He was diagnosed with cancer in early November, and found it had already metastasized to his bones. He passed away on Nov. 30.

“I’m not sure I’ve fully processed it yet,” says Chris Smith, a friend of Cupolo’s and colleague at Woodsongs. “There was a time when he and Sondra took a leave of absence to go to Greece. In a way, my brain is sort of compartmentalizing this in a similar way: Well, he’s just away. So I think I’m definitely in a couple different grief stages, one being acceptance, but on the other hand, there’s a hint of denial going on too.”

Smith—or Smitty, as Cupolo playfully called him—met Cupolo in the music scene in Boulder and the two became fast friends. When an opening came up at Woodsongs, Cupolo recommended Smith for the job. Eventually, Smith went on to play bass in Cupolo’s band Hotfoot.

“In a nutshell, he was like a Tootsie Roll pop: He had a sweet, rugged exterior—a little hard at times, with that East Coast, Jersey attitude—but inside he was all love, all gooey,” Smith says. “Years ago I was going through a divorce—he didn’t know me all that well at the time—and I needed a place to stay, and he offered me his apartment in Longmont because [he and Sondra] were moving out of it. He gave me a sanctuary for a while, which he didn’t charge me a cent for. It was just out of the kindness of his heart. That’s the kind of guy he was: He loved to give me grief at work and on stage, but I knew it was all out of love.”

Smith says that as the owner of Woodsongs, Cupolo was “very eager to connect further with the Boulder community.

“And that meant personally getting to know all of the schools and the teachers,” he says. “He found that very important, not only for the business, but just for connecting our community. He was very generous in that respect. He was always quick to give out gift certificates to people and donate to charities. That was just all part of his vision, just to connect everybody figuring that it was a small investment that would yield bigger results. That was the way he saw the world. He wasn’t just making a buck. He was really active and making a difference.”

In the wake of Cupolo’s death, his bandmates in Hotfoot finished an album they’d been working on for a number of years. Next Sunrise is available on all streaming platforms.

Friends and family are hosting a celebration of Cupolo’s life on April 2 at the Wildflower Pavilion at Planet Bluegrass from 1-4 p.m. Blanchard says there will be “a formal celebration ceremony and then a song circle in which everyone may participate, so folks can feel free to bring instruments.”

For those looking to share their memories of Shawn Cupolo with his family, friends and colleagues, a condolence book is available at H.B. Woodsongs.