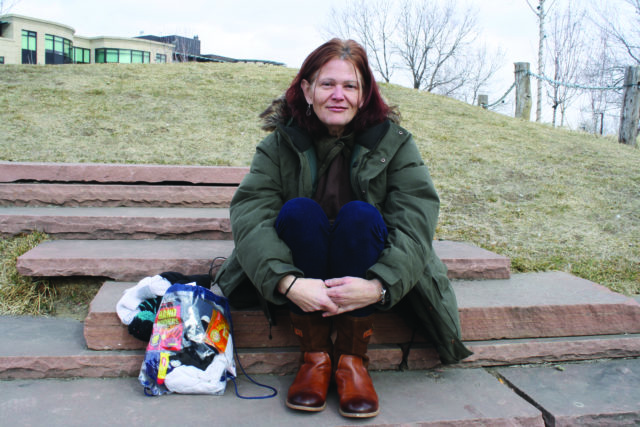 Jennifer Livovich always has a few extra pairs of thermal socks in her bag as she makes her way around Boulder. She deliberately takes the path through Central Park or walks around the library on her way to wherever she’s going, stopping whenever she sees someone who might need a pair.

“A lot of times, I know the person,” she says, displaying other items in her go-to bag: an individualized first-aid kit, hand and foot warmers, lip balm, a knit cap and some gloves. It’s all part of her Save-A-Toe initiative, a donation drive focusing on collecting and distributing thermal socks and other winter gear and clothing to people experiencing homelessness in Boulder.

Livovich is no stranger to living on the street, first experiencing homelessness in Indiana where domestic violence prompted her to use safe house shelters, all of which had specific time limits to her stay. When she first came to Boulder she stayed with a friend for a while, but she soon found herself homeless again, befriending people downtown, “long-term homeless Boulder community members,” as she describes it.

For four years she was chronically homeless, in and out of detox and jail, a self-described “high-utilizer” of the system. She was often in encampments that were broken up in the middle of the night by the police, receiving citations for violating the camping ban or trespassing laws.

Often, she simply moved to another area of town, until she, along with others, were moved again, she says.

“There was no place actually safe,” she says. The shelter was too far away, she says, and besides, she often didn’t feel safe in the shelter either, or wasn’t able to stay there due to her alcohol use.

Eventually, through the court navigation program, she was sent to Fort Lyon, a supportive residential community helping those experiencing homelessness with recovery and transitional housing, operated by the Colorado Coalition for the Homeless in southern Colorado.

At the time, she had severe frostbite.

“My foot was ready to fall off,” she says. It was one of those weeks in Boulder where the temperatures changed quickly — one day she was walking around barefoot in a T-shirt, the next snow was falling and she got severe frostbite on one foot.

She lost a lot of skin and her toenails. The doctors were afraid her toes would fuse together in the healing process. When all was said and done, they had to cut a quarter-inch off her big toe — “Enough to know it was different now,” she says. “I was lucky.”

Livovich completed the program at Fort Lyon over the course of 18 months and returned to Boulder about a year ago. She’s currently enrolled at Colorado State University Global, an online school where she is studying strategic public policy, and public and nonprofit management. She’s spent most of her time researching national housing policies and chronic homelessness, looking at data-driven solutions. She also works at a convenience store in South Boulder where she’s open about her story and her past with customers. It’s a way of engaging the broader community in an awareness and discussion of homelessness in town.

“It’s really helped, I believe, helped to reduce the stigma associated around the homeless,” she says. “It opens the door for conversation.”

When not studying or working, she spends her time offering up her experience through community presentations for a variety of different sectors in the city, and distributing donated items through Save-A-Toe whenever she can.

“Before I personally got frostbite, I literally used to think people were exaggerating. I thought they were just cold,” she says. “And I actually feel really terrible about that because it’s one of the worst experiences … because it’s a chronic type of agony.”

During her stay at Fort Lyon, she kept in touch with some of her friends back in Boulder via Facebook. One of those people was Benjamin Harvey, Benji to his friends. Also chronically homeless, Harvey’s body was found outside on Christmas Day 2018, temperatures dipping into the low teens that week.

After Harvey’s death, Livovich formed a relationship with his cousin in Texas who now organizes donation drives for Save-A-Toe through her church, and her employer covers the shipping costs to Boulder. Harvey’s cousin often sends individualized notes and care packages to some of Benji’s friends who are still experiencing homelessness, all of which Livovich happily delivers.

Along with Harvey’s cousin and her church, Livovich gets socks, warm clothes, sleeping bags and winter gear from other out-of-town private donors, and after hearing about Livovich’s efforts, employees at the library organized a sock drive for Save-A-Toe.

“Socks are one of the least donated items in shelters,” she says. “And people like to donate those flimsy, cotton socks, which is nice, but those aren’t the best socks in the winter time. So, my goal is to have the thermal socks when people need them long after the holidays, when everybody’s generosity [has] faded.”

She also has a volunteer agreement with the severe weather shelter, where she goes in and exchanges people’s dirty socks for a clean pair, almost always brand new. She’ll also wash the dirty socks, as long as they are in good shape, and use them to replenish her stash to give away later.

Livovich lives in North Boulder and without a car, it can often be difficult to distribute items downtown, but she’s developed a small network of people to assist in the distribution. She accepts donations year-round but is specific about when she hands out some of the resources, waiting for when she knows the weather is going to get bad, making sure she’s not giving people extra stuff to carry around when they don’t need it.

“I do it out of my own personal experience, but also the experience of others,” Livovich says of the Save-A-Toe initiative. “And I do it in memory of all my friends that I’ve lost.”