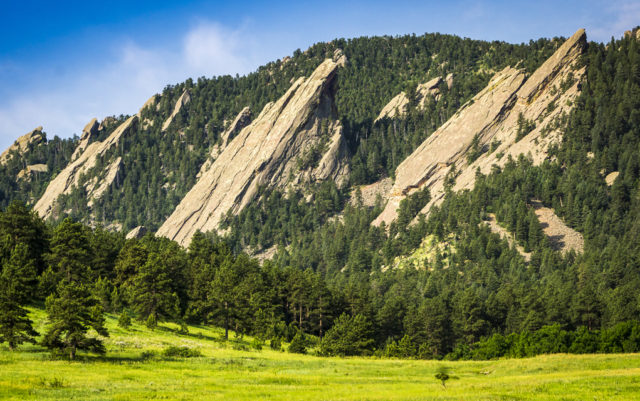 As you’re driving west, there’s only one surefire way to know when you’ve made it to Boulder. And no, it’s not Pearl Street or Fox Theatre or even the University of Colorado. It’s the large, protruding rocks that stretch toward the sky, 8,000 feet above sea level, keeping watch over Boulder Valley. These rock formations, commonly known as the “Flatirons,” are the most prevalent aspect of Chautauqua Park, which has preserved the area surrounding these sandstone pillars as a historic landmark since 1898.

You’ll find hundreds of people hiking or picnicking up there on any given summer evening, but it’s more than just a fun place to recreate. It was originally intended as an education center for both community members and travelers coming to the Rocky Mountains. More than a hundred years ago, our Colorado Chautauqua spawned from a large organizational body, the Chautauqua Institution, based in Chautauqua, New York. The original concept was simple, though considered experimental at the time: create a space outside of schools to extend education and vacation-based learning programs to communities.

It was Ohio philanthropist Lewis Miller and Alabama Methodist pastor John H. Vincent that came up with this idea. They established the first Chautauqua in 1874 — the Chautauqua Lake School Assembly in New York — and developed a new training program for Sunday School teachers. They choose the word “Chautauqua,” which comes from the Iroquois language and could mean “a bag tied in the middle” or “two moccasins tied together,” because it describes the shape of New York’s Chautauqua Lake.

The Chautauqua Institution was a reflection of the 19th-century, nation-wide effort to professionalize teaching. Although the Institution was based on religious studies, Miller and Vincent were adamant about associating their training system first with educational purposes. The Institution quickly became host to many other scholarly and artistic endeavors such as symphonies, ballet, theater, and visual arts exhibits

The expansion across the U.S. in the late 1800s was known as the “Chautauqua Movement,” and as it grew more popular, the word “Chautauqua” became synonymous with educational training. Back in New York, Miller and Vincent established another iteration of the concept, the Chautauqua Literary and Scientific Circle (CLSC), which put an emphasis on teaching students “alternative” ways to use their leisure time, rather than drinking or gambling. These smaller community-based circles of reading and studying caught on fast in rural places out West.

Boulder’s Chautauqua chapter was actually founded in Austin, Texas, in 1897 as the Texas-Colorado Chautauqua Association. It didn’t last long there; after students demanded a cooler climate in exchange for Texas’ sun-drenched flatlands, the Chautauqua moved to Colorado.

Boulder’s Chautauqua is unique in the fact that it’s the only Chautauqua west of the Mississippi River that has yet to break continuous operation. Along with that, according to the association, it’s the only Chautauqua that operates year-round. This, of course, means that since its inception in 1898, the Colorado Chautauqua has never missed a day of operation — even under threat from the thick snow blankets that cover the Front Range every winter.

The Colorado Chautauqua protects approximately 26 acres of land that it leases from the City of Boulder, located at the base of the distinguishable Flatirons (back in the day, though, they called them the Chautauqua Slabs). Most of the original buildings are still in use today, including the Chautauqua Auditorium, the Dining Hall and more than 98 cottages that the Association rents out. It was actually the effort to buy this land and build Chautauqua that led to the earliest formation of a city parks department.

The first season of Colorado Chautauqua’s operation was ambitious. In 1898 they scheduled 94 speeches over six weeks, two of which featured the governors of Colorado and Texas. All attendees were housed in tents and had to either walk or ride horses through the one-and-a-half miles of muddy trails — a reliable streetcar line from downtown Boulder to Chautauqua hadn’t been built yet.

Despite the rough start, Colorado Chautauqua continued to offer numerous activities in which community members could enroll day-to-day. Musical classes were taught for cello, guitar, mandolin, piano, singing and chorus. There were also 51 different classes for students to take, ranging from physics and mathematics to literature and botany.

Today, the Colorado Chautauqua is as strong as ever, still hosting lectures, concerts and film series throughout the year. In 2006, the Colorado Chautauqua became a National Historic Landmark, and the space continues to attract hundreds of thousands of people each year, thanks in part to its gateway power over the dozens of miles of trails that line the base of the Flatiron’s large, flat slabs jetting up from the ground.