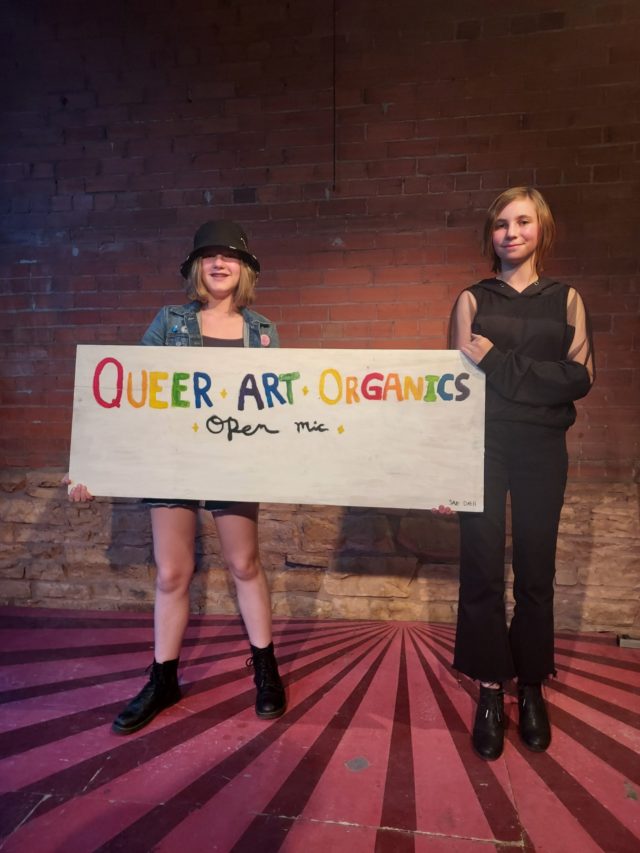 Aimee Herman was a keystone of the artistic community in Boulder in the late 2000s while studying creative writing at Naropa University’s Jack Kerouac School of Disembodied Poetics, the passionate poet’s curly fire-engine-red hair and glasses marking an unmistakable presence as the weekly host of the since-closed Folsom Street Coffee’s open mic.

Herman—who uses they/their pronouns—calls their poetry “an experiment with what happens when you disembowel the gender of a body.” Born in New Jersey, though Brooklyn is where their “heart was born,” Herman returned to Brooklyn after graduating from the Kerouac school. They earned a creative-writing Master of Fine Arts from Long Island University Brooklyn and ran numerous open mics in New York while teaching English at several community colleges and coming to identify as non-binary.

“It’s complicated,” Herman says. “I started using that vocabulary in New York, but I have felt it for a long time. I just didn’t always have the words. And non-binary isn’t static for me. I feel trans. I feel queer. I feel like I’m trying everyday to check in with what letters are right to feel more visible to myself.”

Last fall, Herman and their husband, Trae, moved to Boulder to be closer to a dear friend from Herman’s time at Naropa and leave the New York pace for a while. Continuing to teach for Brooklyn Community College remotely, Herman brought their Queer Art Organics to the Trident Café, and it eventually moved to Out Boulder.

“I moved here to try and feel less anxious,” Herman says, “and I think Trae and I were just done with New York. I created Queer Art Organics at a place [in Manhattan] called Dixon Place, this really great, affirming, experimental place. It wasn’t an open mic; it was a monthly show featuring about three different queer performers of some sort, and I did that for several years. When I moved here, I felt like I was jonesing to create another space like that and be part of the queer community.

“That’s one of the challenges of moving to a new place,” Herman notes. “You have to start over in every aspect. Immediately, a month in, I was reaching out to a whole bunch of places, and I think March was our first show at Trident.”

Herman says they have found “so much support and community at Out Boulder,” where Queer Art Organics now takes place the last Sunday of every month, from 3-5 p.m. Performers are welcome to share creative writing and music, but Herman stresses that anything goes.

“I think that the weirdness has not yet started,” Herman quips, “but I’m hoping it will as the series continues. I think it’s getting out there more and being comfortable. The strange moments are the best parts of an open mic, where it’s this chain of inspiration.”

Herman has published two full-length books of poems and one Young Adult novel, and their poems have been featured in countless journals and anthologies. They also play ukulele and enjoy mixing poetry and music. Combining that long creative history with many years of teaching English and small colleges has come to fruition already in Boulder, where Herman will begin teaching English and music this fall at the September School, a private high school that “prioritizes social and emotional learning as highly as academic growth.”

On their way to being hired by the September School, Herman became somewhat of a “queer elder” for some local kids, as young as 12, who have been frequenting Queer Art Organics since it debuted in Boulder at the Trident Café.

“It’s an all-ages space,” Herman says. “Honestly, my favorite moment was when I first saw the kids on stage. I’ve been going to open mics for so long, and it’s never been people that young. I love that they feel comfortable enough not only to be in that space but to share their art. Kids are 100% welcome.”

Straight people are welcome, too, with some guidelines.

“I would hope that people see that it’s a queer open mic,” Herman explains, “and if they’re not queer they’re at least honoring the space and maybe reading a poem from a book that I bring, or saying ‘I’m not queer, but I’m reading a poem that’s queer.’”

Herman’s relationship with the Trident Café is living on, too, with a monthly series called And Now: Featuring… that will welcome an “open jam session” from 6-6:30 p.m. and then feature four or five curated “artists of all kinds.”

Queer Art Organics has hosted numerous “features,” from poets to performance artists, and a few have been respected local poets (such as Hayden Dansky) while others have simply reached out to Herman and succeeded in getting their blessing to feature.

“I don’t want it to be about your bio,” Herman says. “I don’t care if you’ve featured before; I don’t care if you’ve even written a poem before. If you want a feature, feature. I don’t even need to see your stuff. I trust you. I would like for them to be queer. I have not been disappointed in any of them at all.”

As an experienced poet and musician, Herman says they miss not just being a host but also a performer, but Queer Art Organics has been an incredibly positive way to get reacquainted with Boulder over a decade after leaving Colorado for New York City.

Herman says that local bars, cafes, and spaces off all kinds are welcome to get in touch about hosting one-off editions of Queer Art Organics.

“I definitely feel sort of like when I moved here I had one little patch of a quilt, and as the months have progressed I keep sewing on more patches and I have enough maybe to cover my lap right now. I want a queer quilt big enough to fill up rooms.”