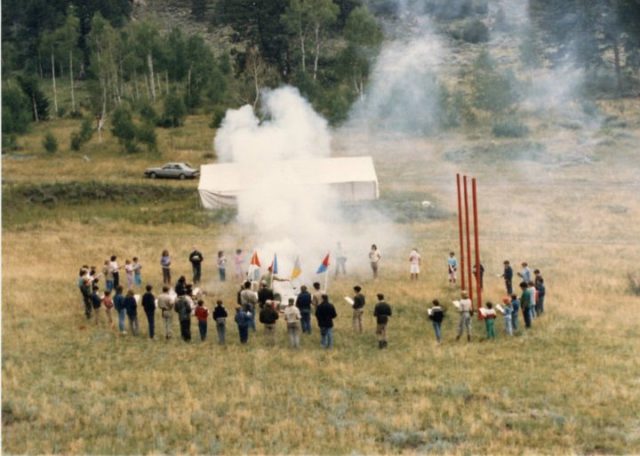 Dhyana Kida was 12 years old when she first attended the Shambhala Sun Camp nestled in the picturesque mountains of Red Feather Lakes, Colorado. Her parents had gone when they were her age, her brother has also attended, and then it was finally her turn.

“I fell in love and went almost every year,” Kida, now 21, says. Her story is similar to most who go: they find themselves returning to camp year after year, eventually becoming staff members that guide the next batch of camp-goers.

The Shambhala Sun Camp is held in only three places in the world: Limousin, France; Nova Scotia, Canada; and our very own northern Colorado. Shambhala Buddhism, which is inspired by the principle that every human being has a fundamental nature of basic goodness, is a philosophy that influences the camp. It stems from Tibetan Buddhism, an ancient practice that spread rapidly in the 1950s after the Chinese takeover of Tibet caused the Tibetan Buddhist teachers to leave the country. Inspired by the Dalai Lama and his practices, campers of all faiths learn about its mindfulness, meditation and awareness practices and can cultivate his or her own being — without any technology present.

Sun Camp runs a weeklong camp (or, there’s an option for older kids to stay longer if they participate in the Cadet Command Workshop or Rites of Warriorship) close to the Shambhala Mountain Center, about an hour west of Fort Collins. It starts the same every morning. Children wake up at 8 a.m. and put on their uniforms for a round of morning calisthenics followed by ten minutes of meditation. Breakfast comes shortly after with campers and staff members in charge of making it and cleaning it up. Then, after a morning parade and raising of the flag poles, the day’s activities begin: playing games, connecting with others, participating in scheduled activities and relaxing with newfound friends.

James Thorpe, Colorado regional chair of the Shambhala Sun Camp leadership group, first went to the camp when he was 10 years old, back in 1992. “Not much has changed except maybe the older [kids] still smoked back then,” Thorpe says with a laugh. Thorpe returned every year until he was 16 years old, and eventually became a staff member, then an organizer.

“What keeps me coming back to it is that the magic is still very much woven into the fabric of the camp,” he says, referring to the special connections that stem from the simple experiences that occur in the wilderness without the distraction of cell phones and social media. Children are able to stay attuned to their surroundings and, most importantly, themselves, while discovering their own leadership potential, strength and personal power.

Kida can recall one particular staffer named Corey, who she describes as a strong feminine role model. “She was extremely brave and piercing, yet still had sympathy and compassion,” Kida says. “She embodied this kind of woman that I wanted to be.”

When Kida attended Boulder High School, she decided that the traditional route wasn’t for her, and she left. She enrolled in Boulder Universal Online School and completed high school online.  “[Camp] shaped who I am in an abstract way,” Kida says. “It gave me the courage and bravery to face it and do it.” After graduating from high school, she began to teach at a preschool where she says she could pass on her knowledge from camp and cultivate the little ones into their own beings. Kida is helping organize the Sun Camp for this upcoming summer and will return as a staffer.

Chairman Thorpe says there are many benefits to attending Sun Camp. Besides making lifelong friends and learning how to live in the woods, a big one is practicing mindfulness, which many know as the practice of maintaining a nonjudgmental state of heightened or complete awareness of one’s thoughts, emotions or experiences on a moment-to-moment basis. From Thorpe’s point of view, it is the practice of engaging with your thoughts.

Marisa Montagna, the family and children program coordinator at Boulder Shambhala Center says, “It’s one of the best experiences and something I look forward to every year.” Montagna thinks she’s probably one of the only returning staff members who did not attend the camp as a child, but has been part of the Shambhala community in centers such as Nova Scotia and Vermont since 2005.

“It’s an ongoing question to me: Why is it so good?” Montagna says of what keeps her coming back to Sun Camp. “You get to live outside, it’s a basic schedule. Some of the younger children, it’s their first time away from home, but by the end of the week, children get to relax and stand up a little straighter and smile more than they did before. It’s wonderful to see.”

The Shambhala practices are tailored for the children’s age, she says. “They develop something that makes them feel like they have power over their life and can learn to control their thoughts and feelings,” Montagna says. “They learn to check in with themselves and that goes a long way.”