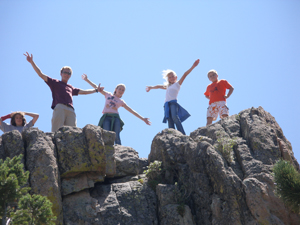 Let’s face it — being a kid can be tough. Bullies like to pick on the shy kids, the geeky kids, those who carry around a few more pounds than the others. All that can take its toll on a child’s self-esteem and confidence. But that doesn’t have to be the case at camp.

“I was home-schooled, and I had a good group of friends. I was really lucky,” says Ali Kirby, a 20-year-old from Boulder who spent many a summer at Fire Mountain’s Warrior Goddess Camp in Jamestown. “But I was a shy kid; I didn’t put myself out there. [Camp] changed things in me. It changed my perspective of the importance of fitting in. I started to place more value on who I was as a person, and trying to be somebody else so other people would like me was less important.”

Parents have choices to send their kids to camps that build on their strengths — maybe Billy is a great soccer player or Amanda loves to paint. But what if their strengths aren’t yet realized? Some camps make it a point to not only socialize kids, but to create ways to boost their self-esteem during the summer months so they can go back to school with a new sense of self.

“We’re doing sweat lodges and barefoot glass walks. We really take the kids to a new edge of personal understanding,” says Aaron Huey, president of Fire Mountain, which puts on Warrior and Warrior Goddess camps for kids ages 5-13. “The whole concept of Warrior Camp is, this low self-esteem has got you down, but you can handle a lot more than you think you can.”

Other programs, like Rocky Mountain Day Camp in Boulder and Superior, aim to build confidence and self-esteem by placing kids in small groups where they really get to know their counselors. Parent testimonials on the camp’s site indicate that kids are pushed to achieve goals and try new things.

“It’s important for kids to have self-esteem for when they go back to school and also for their future as adults,” explains Lisa Shaughnessy, the “camp teacher” at Bright Horizons in Louisville. “In our program, we do a lot of team-building. Learning at a young age to have selfconfidence and also be able to work with others without feeling intimidated helps build their self-esteem.”

The team-building exercises at Bright Horizons, much like those at Warrior Camp, are set up like a game — so the kids don’t necessarily realize they’re being taught a valuable lesson. At Bright Horizons, kids team up on “survivor island” or they work together in the kitchen creating veggie monsters. At Warrior Camp, the games are a bit more primal. Campers go to their “battle stations” and take turns throwing spears and shooting bows and arrows.

In Kirby’s case, camp succeeded in such a deep-seated way that she now spends her summers working there.

“‘I can’t’ is a curse word at camp. If someone says that, everyone does five push-ups,” she says. “It’s a fun way to train your mind to not put yourself down.”