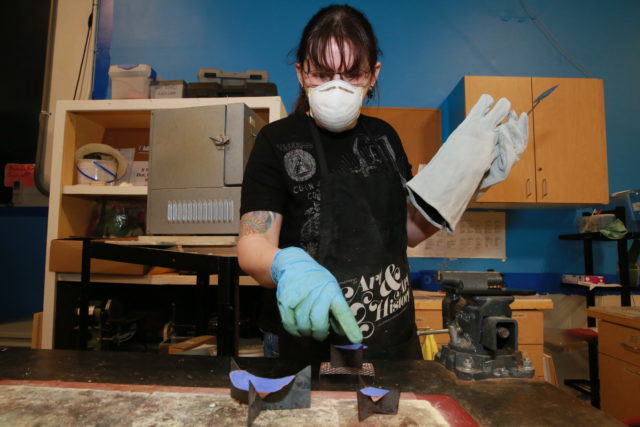 Over the past several years, makerspaces have popped up all around the country. The concept is simple: a community venue with tools to explore different pursuits, from engineering to the arts to entrepreneurship.

In Longmont, TinkerMill has grown to be the largest makerspace in the state and surrounding Rocky Mountain area. Open 24 hours a day, seven days a week, TinkerMill offers a wide range of professional-grade equipment, experience from leaders in various fields, classes for people of all levels and resources accessible to everyone. Executive director Ron Thomas calls it a hub for innovation and creativity.

“It’s a way to learn new technical and artisanal skills really easily,” Thomas says. “There are virtually no barriers to entry besides just showing up and paying the $5 fee for a class or using a machine. TinkerMill is a way to share tools and knowledge, which is huge.”

TinkerMill began in the summer of 2013, when original founder Scott Converse had an inkling to create a makerspace in the area. He began with a hackathon over a weekend where he gathered a group of high school students to create mobile applications. After a successful event, Converse thought Longmont was ready for a collaborative creative space open to everyone.

He posted a meetup online and decided if four or more people came he’d do another one. Six people arrived for the group activity, and eventually that grew to more than 20 people, who all joined as founders of TinkerMill. Ron Thomas was one of those members.

Thomas grew up with a love of science and engineering. But after college, his business career took him far away from those interests.

“I wasn’t doing anything with science or technology or even hands-on. So I was interested in an idea of a makerspace for a long time,” he says. “And I just happened to notice TinkerMill right when it started and dove in head-first.”

After moving through a few locations, TinkerMill settled in its current spot on Delaware Place in May 2014. The current location is 13,000 square feet, and its membership has grown to more than 600 people, with those numbers doubling about every 18 months, Thomas says.

He credits Longmont for TinkerMill’s success: The city is close to universities, federal research facilities and Silicon Alley in Interlocken. Many professors live in Longmont, as do many retired IBM engineers.

“It’s really cool to see a 5-year-old kid who wants to learn something about robots, and the person who’s helping teach him is an engineer who helped design the displays for the space shuttle in the late ’70s. That’s the kind of caliber of the folks in the area,” Thomas says. “It’s great to see how many folks there are in the community that are not only interested in participating and learning science and artistic ways, but also sharing and giving information that they know.”

TinkerMill offers equipment and work space for a variety of pursuits including ham radio, glass work, electronics, rapid prototyping, pottery, textiles, woodworking, machine shop, welding, blacksmithing, chemistry, stained glass, robotics and more. The organization is almost entirely volunteer run, with Thomas the only paid employee. TinkerMill has received grants, financial contributions and donated machinery. Members and the community are invited to take classes and/or use equipment for a small fee.

That being said, members are the ones in charge of getting the ball rolling.

“If there’s a project you want to see happen at TinkerMill, then champion it. Talk to other folks and see if there’s interest and then post a meetup,” he says. “It’s very much a do-ocracy. People that get things done, things that they want to see succeed.”

Its members vary from children to college students to retired community members with diverse backgrounds. Thomas recalls two members who were in the same thermodynamics class at the University of Colorado Boulder. One of their class projects was to break out into teams and build an engine of some kind. Many of the students were building simple, mail-order engines, but the TinkerMill members had something bigger in mind.

“One did a turbo jet engine and the other did a pulse jet engine. These things are literally for powering airplanes and rockets and things,” he says. “And they made them here. They were able to come and have all the access to tools and support.”

TinkerMill also sees a lot of entrepreneurs. At its location, it offers office space to small businesses on a month-to-month basis, which helps emerging business owners try out an idea without a lease hanging over their heads. If it doesn’t work out, they can get out cleanly without having to declare bankruptcy. Thomas puts the number of businesses started at TinkerMill at more than 50, with more than 10 successful enough to move into bigger spaces.

“We had a member who had a really cool idea for a special kind of kitchen towel,” Thomas says. “She’d been thinking about the thing for years and never got around to making it. She came here, met some folks who helped her figure out the initial process and how she could streamline it and make it more industrial, how she could set up her LLC, how she could set up her website. She’s got a full business now just from walking in the door.”

The interest from entrepreneurs has accelerated TinkerMill’s participation in the startup ecosystem of Longmont. In the past few years, the organization instigated a new nonprofit, Startup Longmont, and with that came Longmont Startup Week, which is having its fourth event this summer and brings in more than 1,000 people to the city every year. TinkerMill has also developed Innovate Longmont, a program that provides grants and assistance to startups.

Another benefit to the makerspace is the opportunity for collaboration.

“We’ve got those continuous creative collisions where they’re bouncing off of each other,” Thomas says. “Maybe there will be a glass-working person next to a nuclear engineer and maybe there’s a connection between the two of them.”

“They were doing some initial prototyping and development and working with a glass vacuum chamber, and they got some help from a couple glass artists that are here,” he says. “These are people who don’t do the engineering or technical side of it but they work with glass all day every day as their profession. It was neat to see some cross-pollination there.”

Thomas says the initial goal of TinkerMill was to create a clubhouse atmosphere. That goal has developed into an entity that elevates and supports the innovative startup culture in Longmont and also provides auxiliary education opportunities to the community.

“If you’ve got an idea or you want to make something,” Thomas says, “this is the place to show up and do it.”