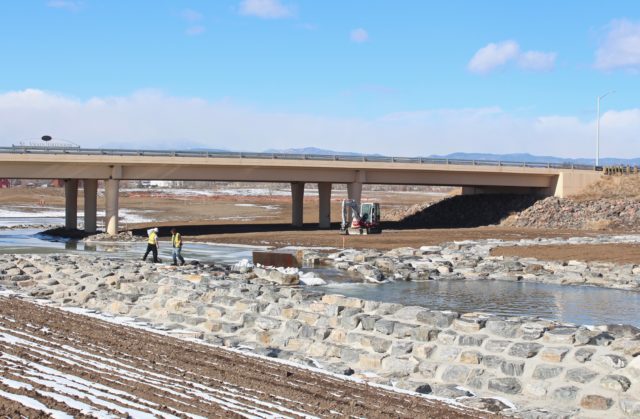 It’s been four-and-a-half years since eight days of rain — what experts would eventually call a “100-year” flood — nearly cleaved Longmont in half. The 2013 disaster damaged hundreds of homes and businesses, crippled the city’s infrastructure and drowned the streets. But while Longmont may have been in deep water at the time, the community wasn’t in over its head. Far from it.

Residents and the City of Longmont banded together and responded to the crisis with a 100-year kind of tenacity. Rallying together to not only recover but prevent future devastation, their efforts have made Longmont a stronger, more resilient place to live, drastically improving the city’s infrastructure.

Jennifer Loper, Longmont’s public information specialist, describes the City government’s mindset during the disaster. “Even before the flooding had really receded we were saying, ‘OK, what do we do? How do we move forward? How do we fix stuff? How do we make it better? How do we make sure we’re helping people?’”

In the flood’s wake, Longmont promptly got to work rebuilding — a task as massive as it was complex, and as costly as it was extensive. But it was one that had to be done. And one at which the City has been able to look back proudly, noting progress every step of the way.

“By the third anniversary of the flood, in September of 2016,” Loper says, “we transitioned from flood recovery efforts into flood protection and resiliency efforts. And that’s where we really are now.”

The flagship project of these efforts is known as Resilient St. Vrain — a multi-year endeavor aimed at fully restoring the St. Vrain Greenway Trail System and improving the channel of the creek itself to protect Longmont from potential future flooding.

“It’s a project that we actually started talking about in the city two years before the flood,” says Nick Wolfrum, the Longmont’s director of engineering services. Though it was hard at first to see how the City would bounce back, now it’s a bit easier to look back and understand how the flood kick-started much needed resiliency plans and investment in protecting the community long-term.

That meant physically widening St. Vrain Creek in some places, rebuilding the Main Street Bridge and the Sunset Street Bridge, and redesigning the waterway itself so that the floodplain is smaller, and the flow easier to control. But perhaps one of the most progressive aspects of the Resilient St. Vrain project is the Dickens Farm Nature Area.

Prior to the flood, a large, 8-foot-tall water diversion structure interrupted St. Vrain Creek east of Main Street to redirect water flow for irrigation and water rights purposes. During the flood, it was completely washed out, according to Steve Ransweiler, project manager for the Dickens Farm Nature Area. Instead of replacing it, Ransweiler and his team decided to spread the 8-foot drop over a longer distance in order to create a series of small steps. This not only mitigated the potential for future flood damage, it also created a unique opportunity to develop a new outdoor space for residents to enjoy.

“We decided to break that 8 feet up into nine different structures,” Ransweiler explains. “Nine different drops, with the thought that people can now tube or kayak or paddleboard or interact with the river in some way during the higher flows.”

There will be put-in and take-out areas, a float course, shelters, restrooms, a novice bike skills section and a nature discovery area for kids to play in and explore. When complete (expected by the end of 2018), this new recreation zone will provide Longmont with a special place to enjoy the St. Vrain Creek.

“It will be an area where people can go and put their feet in the water,” Loper says. “Splash around a little, hang out, let the kids play.”

“I think that this is going to be a very popular recreation location,” Ransweiler predicts. “There will be a nice benefit to the city long-term.”

Long-term benefits seem to be the flood’s real silver lining. The disaster left a lot of turmoil, difficulty and destruction in its wake. But — as is often the case with natural disasters — when an area is ravaged, whether by flood, fire, hurricane or earthquake, life tends to grow back stronger and more resilient in the aftermath.

“Longmont’s always been a strong community, but you know, having the flooding happen in 2013 we saw people throughout the community come together,” Loper recalls. “We were all in there up to our elbows helping people clean out their basements and helping get folks to a shelter, or whatever needed to be done.”

“It was certainly a huge impact,” Wolfrum says. “But what you have to do is learn from that and carry it forward, and I think we’re doing a good job of that.”

Sarah, a local who lived in Longmont prior to the 2013 flood, has watched the recovery efforts develop. The process has been slow, she says, but that was to be expected. Still, she’s pleased with how the disaster was handled. “I think the City has definitely seized the opportunity to improve wherever it could,” she says. “They are making the most out of a bad situation.”

Other aspects of Resilient St. Vrain project are also underway. East of town, the St. Vrain Sandstone Reach, where the creek cuts through the Sandstone Ranch Nature area, is nearing completion, with most of the Greenway trails rebuilt. It will reopen this spring. The South Brett Parkway Bridge replacement just broke ground, and is expected to wrap up some time in early 2019. And City Reach 2A, the zone directly upstream from Main Street going west, just past South Platt Parkway, will start construction in May.

There is a lot of work yet to be done, clearly. But in the five years since the historic flood threatened Longmont and tens of thousands of residents, the City and its people have made some incredible strides.

“It’s going to be very different from what it was once before,” Ransweiler says.

Different, stronger and more resilient than ever.