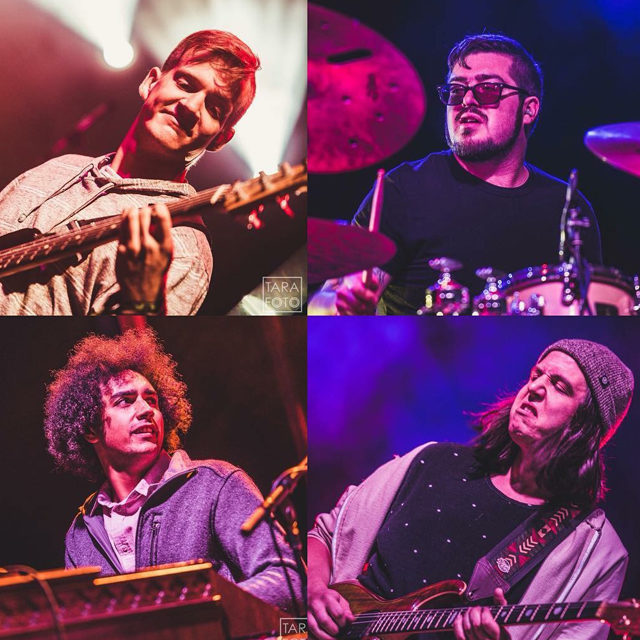 With infectious enthusiasm for music, performance and community, Magic Beans — the music group comprised of Scott Hachey, Casey Russell, Chris Duffy and Cody Wales — has become one of Boulder’s favorite local jam bands. Blending Colorado’s homegrown music scene with a growing national fan base, Magic Beans continues to win over the hearts and ears of thousands. By combining elements of jazz, soul and funk into their heady beats and funky soundscape, the Beans create a sound so full, you’re dancing before you even realize it.

The band stays busy playing 100-plus shows a year across the lower 48 at festivals like Camp Bisco and venues like Brooklyn Bowl, and hosting their yearly music festival, Beanstalk, in Bond, Colorado. With shows already scheduled for the next year, a newly released album and big plans for Halloween night at Fox Theatre, the band shows no signs of stopping. We caught up with bass player Chris Duffy as Magic Beans winds down the tail end of their most recent tour promoting their album Casino Cabaret, released in March 2018.

BW: You’ve expanded your national following by joining forces with bands like The Disco Biscuits, Lotus, Pigeons Playing Ping Pong and Umphrey’s McGee. How does it feel to perform for your local fan base with national legends?

Duffy: Colorado is a destination for music of all types, so we’re really lucky to have all these great players coming through to collaborate with. Every month we see more and more musicians that we’ve been looking up to for years move out here, and being a band with some notoriety on this bustling scene means we get to jam and hang out with them pretty often. I’ve since learned how not to geek out and stumble over my words too much when meeting my heroes. There’s still this weird sense of “is this really happening” when someone like Adam Deitch (Lettuce, Break Science) comes up to you side stage before your encore at Cervantes and asks to sit-in. Yes was the only answer and it was a great jam, and hanging out with him after the show reminded me that those big names are all just normal people, and most just want to be treated as such.

BW: You’ve collaborated with a lot of other local bands such as Eminence Ensemble, Cycles, Part & Parcel, Amoramora and Tenth Mountain Division. What’s the best thing about working with other Front Range bands?

Duffy: The hang! When everyone on the bill is friends, usually the majority of the crowd are friends too! That puts you into this comfortable place on stage from the first note, as you look out at a sea of smiles and think, OK, we’re all in this together, we got this no problem! And playing with your best homies means you can count on some sit-ins that add a unique sizzle to the sets. Plus, the after-parties are great for catching up with old pals.

BW: If someone has never been to your show, how would you describe it?

Duffy: It’s a dance party, a conference on self-expression through collective and improvisational music. We want it to be a safe place for any person and an opportunity to not take yourself too seriously and just cut loose. Musically we’re a “modern jam band” that incorporates elements of funk, rock, electronica, disco, dub, bluegrass and folk. Anything is fair game on our instruments and on the dance floor.

BW: What’s the story of the band name?

BW: What is your pre-show ritual?

Duffy: I’d love to say I have one that I stick to, but when you’re on the road it’s constantly changing. It usually involves running around the venue setting up our audio recorder or our merch booth, but then I’ll go to the green room, do some yoga or a brief meditation, drink a beer and hopefully warm up on my bass a little. I think as time goes on I’ll be able to hone that into a more consistent, healthy routine. As with everything about this band, it’s a work-in-progress.

BW: You just released your newest album, Casino Cabaret, named after a sign that hangs in one of your most popular venues — Cervantes in the Five Points neighborhood of Denver, on March 16. What’s your favorite song on that album?

Duffy: Probably “Mr. Scientist.” It was a really fun one to track, and I got to add some extra beef to the bass line in key sections with a patch I made on a Prophet 6 synthesizer. Josh Fairman engineered, mixed and co-produced the album with us, and plays bass in SunSquabi, Analog Sun and some other amazing groups. Having such a killer bassist and musician involved was such a blessing for my comfort and the album’s sound; he really captured my bass’ tone in the best way, and it really shines on this track. “Mission” is another special one for me. It’s the first song that I wrote that we played live with the Beans.

BW: You guys tour a lot throughout the year. How is it different to perform in Boulder for a home crowd than on the road?

Duffy: I really try to treat every show the same, no matter if there are 20 people in the crowd or 2,000. It’s easier said than done, but I just want to connect with everyone out there with an open heart, and listen to my bandmates with open ears. You always know a home crowd is going to support the crap out of you on stage and make you feel loved. It’s incredible when you show up to a town you’ve never played before and are received with a palpable energy that you weren’t expecting. I’m so thankful for everyone and anyone who comes out to our shows or listens to our music; you folks are still the only reason any of this works.

BW: What are you excited about right now?

Duffy: We’re incredibly excited to announce a couple of Colorado shows to close out 2018, including our Halloween throw-down with Consider the Source at the Fox Theatre in Boulder. We’re doing a Western theme, inspired by the show Westworld that we’ve been geeking out on recently. It’s going to be an epic costume party at one of the best venues in the country, so we hope all of Boulder makes it out! We’ll be hitting rehearsals hard when we get back from East Coast tour in August, so there will no doubt be some new songs played at these shows. Gotta keep things fresh!

BW: What is your proudest accomplishment?

Duffy: Recording Casino Cabaret was an amazing experience — we learned so much and are so happy with the finished product. Jam bands have a habit of releasing studio albums that fail to capture the energy of their live shows, but I think we were able to avoid this while still embracing a balance of clean-cut precision and first-take freedom. We’ve gotten a great response from jam fans and lovers of more conventional pop and rocks styles alike.