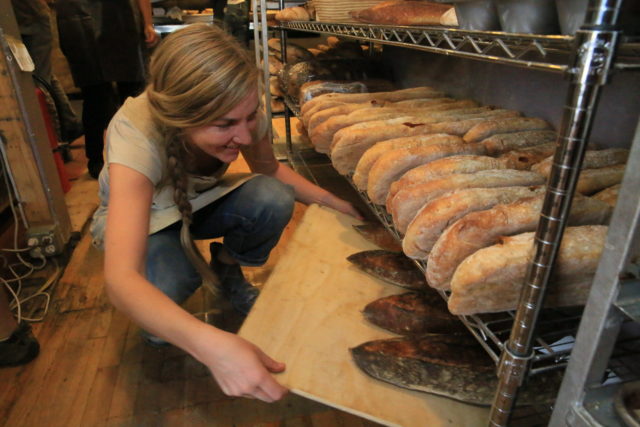 When it comes to grain, the future looks like the past. Go back a half-century in Boulder County, and there’s Old Man Webber coming into town with his portable combine. Word gets passed around and Webber goes to every farm, home and plot growing wheat and chops it. Then Beth near Valmont gets her seed cleaner running, and people take their grains there. Of course John Miller has the mill, and he gets it running in his barn. Out comes flour of all types of grain — dozens of varieties of spelt, rye, winter wheat, oat, einkorn… and on and on. Bakers buy some for their loaves. Families buy bags instead of the prepackaged grocery store cheap stuff. Webber moves on to a new community, Beth and Miller shut down their machines, and Boulder County has local, healthy, hardy flour for another season.

If you ask the people trying to rebuild that local grain chain, they’ll say that’s a system that’s not too far away from being revived — maybe five to 10 years. That’s assuming, however, that we overcome major obstacles: we have to find seeds to grow; the fields that once grew wheat now grow other crops; Old Man Webber is dead; Beth sold off her seed cleaner for a hoop house; and Miller’s mill is mothy and only grinds rust nowadays.

But change is afoot. Now that we’ve buoyed a resurgence of heritage and heirloom vegetables, fruit and meat, a motivated group of locals is creating a network to restore grain.

“All these vegetables are great,” says Bill McDorman, founder of the Rocky Mountain Seed Alliance, which is working to put heritage grains in the hands of growers. “But they’re just the icing. We need the cake.”

About 10,000 years ago, civilizations in the Middle East started growing and harvesting grain. A grain called einkorn is largely considered to be the first cultivated grain crop. Andy Clark, of Moxie Bread Co., which bakes with ancient grains, calls it the “mother wheat.”

With 14 chromosomes, einkorn has a low gluten content, so it was used mainly for flat-breads — gluten being the protein in wheat that helps bind baked goods — but it also means that it’s easier for humans to process.

“Einkorn digests so smoothly you don’t even feel it,” Clark says. “It’s a little tricky to bake with, but the flavor is really nutty and sweet and delicious.”

Einkorn blended with wild grass to create emmer, which has 24 chromosomes, and its sturdier molecular structure lended itself better to bread. From there, emmer mixed with goat-grass to create 48-chromosome varieties like spelt and other “modern” wheats, which have further growing and baking advantages. This group of grain, with the addition of kamut, is what we call ancient grains.

From those groups, McDorman estimates there are about 30,000 varieties of wheat on the planet. These wheat varieties come packed with protein (how do you think cows get the protein we then eat?), and myriad nutrients.

And yet, today, we tend to buy only two varieties: common, or bread, wheat, which makes up 95 percent of the world’s wheat production, and durum wheat.

How did this happen?

“I think it’s like everything else when convenience became king,” says Mona Esposito, who co-founded the Noble Grain Alliance and works now as the Grain Lady to restore ancient grains. “We didn’t know our farmers. Now we’re like, ‘How did this happen?’ But there was that huge gap from the ’50s until not that long ago, where it was all about getting everything in the supermarket.”

Industrialization and globalization led farmers to switch to common and durum wheat, which not only performs well, but stands sturdier in the field, making it less susceptible to natural destruction, and can be processed quickly with heavy machinery.

But those processes also stripped the wheat of its bran and germ, and thus its health benefits, which has led many people to swear off wheat products entirely because they can’t digest this nutrition-starved variety. The first step in restoring ancient grains, Esposito says, is educating people that there’s more to wheat than the sacks of flour available in the supermarket.

“The gluten people have done such a good job of making us not really understand what’s going on,” she says. “It’s only one [reason] why we’re having so many issues with wheat. It’s the refined flour. There’s nothing really good in that.”

If creating demand for ancient, healthier grains is the first step in rebuilding a local grain chain, the next step is teaching ourselves how to grow wheat again.

The Rocky Mountain Seed Alliance has secured some 285 varieties of grain. They ship these seeds to about 90 volunteer growers in the mountain West — from backyard gardeners to large-scale farmers — and collect data about how rare varieties of ancient grains grow.

It’s a grassroots effort to rebuild a knowledge base that has been lost to time and mangled by the industrialization of agriculture. The Alliance is able to now collect data on how much sunlight and water these grains need, what weather affected their growth, how easy they were to harvest, and how they perform when milled and baked.

Lee-Ann Hill runs the grain trials program for the Alliance. She says because the Alliance works with amateur growers, they can collect a wide variety of information that traditional farmers, who may not be able to devote resources to it, can’t provide. The key now is figuring out how to share that information with more people.

Hill can, however, see what could happen if the knowledge is shared.

The question is: Who’s going to take the risk to build the infrastructure needed to support a local grain economy?

Esposito thinks she has at least one answer.

On a recent fall morning, I met Esposito as she milled turkey red wheat grown at Cure Organic Farm in Boulder. Esposito owns the machine, which she bought used from a local restaurant. Offering a mill is one small, but important, step in providing the infrastructure needed to motivate farmers to grow wheat.

“Those pieces of the grain chain, they’re cost-prohibitive. … I think there were 12 mills in Boulder County 100 years ago. Now there’s nothing.”

Not only is Esposito seeking to provide the tools necessary for growers to turn ancient grains into flour, but she’s hoping to provide the requisite know-how. At Cure, there were no less than a dozen tweaks to the ostensibly simple mill that Esposito made without much thought during the milling process. But when you factor in thousands of varieties of grain, grown in dozens of different settings, to produce flour that can be used for myriad purposes — then multiply that over each step of the process (securing seed, growing, cultivating, cleaning, milling and selling) — the most valuable resource in restoring Boulder County’s grain chain might be knowledge.

Esposito said that Black Cat Farm Table Bistro owner Eric Skokan is trying to build an ancient grain production line, replete with that library of knowledge, so I went to visit him.

“It’s coming together, right?” Skokan asks rhetorically when I ask if he can single-handedly rebuild the grain chain. “When I first started doing it, I thought, ‘It’s wheat, how hard can this be? … It turns out it’s really challenging. Mostly because of the equipment that is needed.”

So then he bought a seed cleaner. That allowed him to clean 300 pounds in an hour. And at last he bought a large stone mill, which can crush about 100 pounds of seed in one hour.

So all it took to create a comprehensive mill house was about $30,000. But it’s the kind of bold investment that’s needed to restore the grain chain.

“I wanted to use wheat we feel good about in the restaurant, and it turned out to be maddeningly difficult,” Skokan says. “Eventually I said screw it, ‘I’m going to do it myself, dammit.’”

Skokan is figuring out how to rent his newly established mill house to local producers for the cost of electricity.

If that takes off, then the responsibility gets passed down the chain to food producers, Skokan says. Luckily, there’s demand, starting with bakers.

One such artisan is Clark, of Moxie. A baker for 15 years with Whole Foods, he had the opportunity to try out different grains and see how customers reacted to it. Like with all new-fangled things, there was an education gap.

“The public we were serving, in a broad sense, said, ‘We’re organic, we’re healthy, we’re vegan, we’re whole-grain,’ and then we’d roll out these whole-grain breads. … Everyone would say, ‘Woohoo!’ and then they’d show up and say, ‘I’ll take the baguette. I’ll take the ciabatta.’”

So Clark actively “sneaks” in whole grains into most of his breads, with plans to do so for his pastries, so that he can help calibrate the community palate toward ancient grains —  about half of his standard bread flour mix is ancient blue emmer.

Clark sources his ancient grains from suppliers throughout the Southwest and Grain Belt. He has a producer in Kansas who makes turkey red wheat. Another grower in Nebraska makes einkorn. Locally, he’s working with Aspen Moon Farm to not only source grain but potentially work out a risk-sharing program; almost like a guaranteed buy even if the crop succumbs to a hailstorm, as Aspen Moon’s many acres of wheat did this year.

The key, Clark says, is keeping the grain economy local, because as soon as transportation costs are figured in, the costs become too high for business owners like him.

“I would try to encourage other restaurants and bakeries to go and ask their local farmer if they would plant some grain, or get to Aspen Moon or Black Cat and get their grain.”

Clark always has extra flour from ancient grain available for restaurateurs and bakers to take and experiment with. He sells it at-cost so there’s no price barrier to spreading the word.

“I want to get people started and say, ‘Now you can order it from the farm,’” Clark says. “Look around you and ask questions and try to establish relationships, because your customers will be elated.”